The second instalment in The Dreams Come True Series, Ship of Dreams by Rebecca Heflin is a romance novel full of passion, fine dining, conflict, travelling, more conflict and eventually love and happiness. It can be read as a standalone. 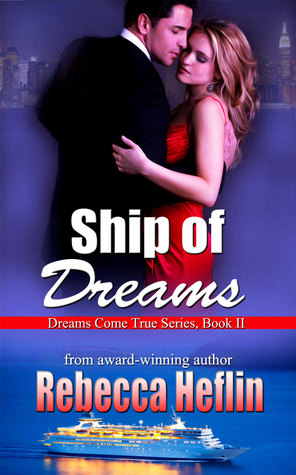 The story is about Laura Armstrong and Nathan Maxwell. Those who have read, Dreams of Perfection, will recognise Laura and already have an idea about her character. Those who haven't will get to know her from the first chapter. She's always chic, loves to wear high-heels and short skirts and has a different boyfriend every month.

In the novel, Laura and Nathan work for competing advertising companies and both are after the same account: Imperial Cruises. The two characters have a chance meeting on the street and end up meeting on the same ship, owned by Imperial, named "Nave dei Sogni" (Ship of Dreams).

They start what they lay down as a temporary love-affair on the boat but a chance text results in the discovery that they are one another's competition. This, however, comes almost mid-way in the book.
Narrated in the third person, Ship of Dreams jumps between the different lives, problems and viewpoints of Laura and Nathan, while portraying the emotions and showing their contrasting but-not-so-contrasting lifestyles as well as their different reasons to want to win the Imperial account.
While Laura seeks to win the account to show her father her worth and get a promotion, Nathan wants the account in order to save his grandmother's farm from the banks, after his grandmother has mortgaged the farm to give her grandchildren a proper education.

I enjoyed Heflin's narration. It was simple and with meticulous details to Laura, Nathan, the ship, their emotions, the food; everything. The novel/cruise also takes you briefly to France and Italy.
However, regarding this same detailed description, I felt that some parts, especially those on the ship and those related to fine dining were too long. I didn't want to keep on reading about every restaurant they went to and what they ordered. The novel might be more interesting to someone who is a fan of fine dining and would consider trying out the places mentioned in the novel, but I felt it was too much; especially, since this resulted in moving the confrontation between Laura and Nathan to nearly the middle of the book.

From the beginning of the novel, we are introduced to Laura's family issues. Her father does not think much of her. When word comes out that Imperial wants a new advertising agency, Laura's father gives the info to his daughter's competitors. He is later shocked to learn that his daughter is going after the same account.
"Thanks to Milt telling Hawk Media about the account."
"What do you mean? Are you going after Imperial?" Her father's mulish face took on a purple hue.
"Yes, and I'm going to get it too." She winced at the petulant sound of her own voice. So much like a little girl's voice. A little girl who had craved her father's attention but had never gotten it.

We also get several comparisons between Laura and her younger brother, Neil, who is described as failing every job he tries, until his father creates a title for him in the Armstrong empire.

I liked the humour between Laura and Josh, Darcy's husband from the first book in the series. They are constantly teasing each other.
"Laura turned and greeted Josh in her usual manner, "Voldemort."
"Bellatrix."

Laura is hard-headed, stubborn, competitive and with a strong personality. And despite there being character development for her, there were some instances in the novel that I felt were contradictory to her character. When she discovers that she is on the same cruise as Nathan and that they are attracted to each other, she offers herself up for a temporary physical relationship with him, twice, which in my opinion makes her look cheap. I felt this part did not fit her character.
At one point, she tells Nathan:
"Let me make it easy for you. I don't need seducing. I'm a sure thing."
He answers: "May be I'm not."
That for me was embarrassing and spoiled the whole moment for me. It also made me dislike Laura and think less of her.
I'm a fan of strong, independent women. But this was low and degrading in my opinion. It also doesn't seem to fit her character.
"She took a deep breath and stepped onto the polished marble floor with all the determination of a gladiator stepping into the Roman Colosseum."
In the first chapter we are introduced to Nathan as wearing a Cartier watch. Later, we see him spending a lot of money, while dining out with Laura. At the same time, he feels bad for the money he's spending because he wants to save up and rescue the farm. These contradictions stuck out with me throughout the novel. I thought it was strange that someone looking to save money and win an account to save his home would spend all this money on appearances. He doesn't have to look like a beggar or a miser, but there is a middle ground.
On another note, Nathan is able to see certain aspects of Laura's character, aspects she tries to hide. There is also a strong comparison between the relationship Nathan and his sister had with their grandmother, and Laura's with both her parents. It is sad for Laura and my heart ached for her. I also got the urge to smack her father.
Towards the end of the novel, Nathan encounters Laura's father. He is both surprised and shocked by their relationship and how much Milton Armstrong thinks little of his daughter, who is known to be a shark in the advertising business.

"She relished a challenge. Like facing a well-skilled opponent in a chess match, it only made the victory that much sweeter."

I also liked the use of "Ship of Dreams" as both the title of the novel and the place the two characters meet and eventually have a happy ending. I felt it was an interesting pun.

The description in the adult scenes was beautifully done with excellent word choice. This is after all a romance novel and I liked the imagery used in these scenes, which were sensual and sultry. I also liked that there was no profanity in the novel.

Overall: I have been delaying this review for a while because I felt the book was not as "amazing" as the first. Sadly, I did do a lot of comparisons between the two, even if the protagonists were best friends but very different from one another.
There were a lot of beautiful images in the novel, some of which I've quoted, some I'll leave for the reader. My overall rating is 2.5 stars. There were parts that I liked, parts that were long and boring – for me. There were parts that were necessary in the character building, especially Laura's. But in the end, I felt I could have enjoyed the novel more if the time spent on the ship was cut shorter.

Note: I received a free copy of Ship of Dreams in exchange for an honest review.
Note: This book is meant for adult audiences. 18+ at least