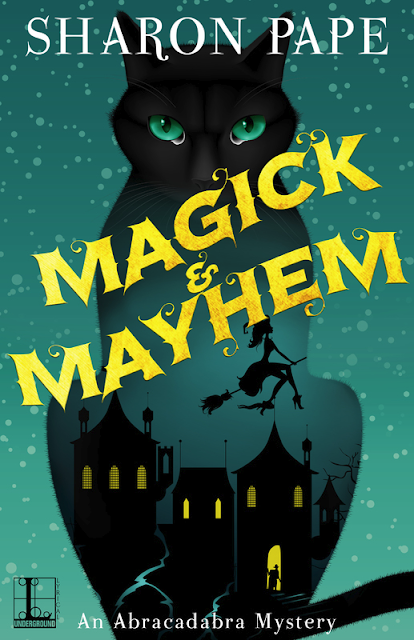 What’s in a murderer’s bag of tricks?
Twenty-something Kailyn Wilde has learned to embrace her unpredictable life as a descendant of small-town New Camel’s most magickal family. She just didn’t expect to inherit her mother and grandmother’s centuries-old shop, Abracadabra, so suddenly. The surprises keep coming when Kailyn goes to finalize the estate at the local attorney’s office—and stumbles over the body of her best friend Elise’s husband . . .
As a brash detective casts the blame on Elise, Kailyn summons her deepest powers to find answers and start an investigation of her own. What with running a business, perfecting ancient spells, and keeping up with an uninvited guest of fabled origins, Kailyn has her hands full. But with the help of her uncanny black cat Sashkatu and her muumuu-clad Aunt Tilly, she’s closing in on a killer—who will do anything to make sure she never tests her supernatural skills again!


Book Review for Magick & Mayhem by Nadaness In Motion

Magic, Merlin and lots of humour and mayhem, that's the first thing that came to mind when I started reading Sharon Pape's Magick & Mayhem.

Narrated from Kailyn's first person perspective, the novel is full of humourous comments, descriptions and events. Set in the small town of New Camel, the mystery is revealed from the beginning when Kailyn and her aunt Tilly go to see their lawyer and find him dead.

Magick & Mayhem has an assortment of wonderful – and less friendly – characters, but all of whom have a role to play. There is Kailyn, whose magic, along with that of her family, has suffered a bug of late, as well as her aunt Tilly, who reads palms – although the accuracy of her readings can be questionable.

Kailyn follows her mother's advice and attempts to summon a familiar, a kind of animal guide believed to help witches with their magic. Instead, she discovers an old man in her basement who goes by the name of Merlin. To her and Tilly's surprise – and to the reader's – the great wizard himself was somehow thrust forward in time from the Middle Ages to Kailyn's storeroom.

"Did this man really expect me to believe he was the legendary wizard? He looked more like a Don Quixote wannabe."

One of the funniest and most entertaining aspects about Magick & Mayhem is Merlin's adjustment to and discovery of the gadgets of the modern world, from the toilet to the iPod to pizza.

I loved the references to books and movies, as well as all the magic and witch-related terminology which gave Magick & Mayhem a truly magical feel. It made me feel I was part of the story. The overall word choice of the novel was perfect and the narration was highly enjoyable. The imagery too was interesting and impeccable throughout. I have never seen so many perfectly-worded similes in one place.

After the discovery of the dead body, Kailyn begins her own investigation and several townspeople attempt to help her in any way they can, whether through throwing gossip her way or through actual help. Kailyn's curiosity is commendable, especially after she begins receiving death threats, and with the fact that the best suspect for the murder is her best friend Elise.

"There was no telling what would happen to history if Merlin died in the twenty-first century. It was bad enough that he would return to his time babbling about computers, aircraft, and men on the moon." 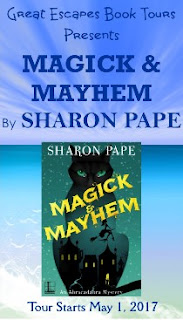 As a cozy mystery, Magick & Mayhem fits all the characteristics, having a fair share of quirky characters, cats and a well-penned mystery. I liked how romance did not play a major – or even minor – role in the novel.

Characterisation and setting were among the aspects that drew me in to the novel as well. Each character was well defined and the setting was realistic. Coupled with the fast pace of the novel, I couldn't put the book down.

Almost before I was half way through the novel did I expect to give it a five-star rating. Having finished, I'd definitely give it 10 stars and can't wait to get my hands on the second instalment in the Abracadabra Mystery Series by Sharon Pape. A must-read at all costs.

"If we ever figured out how to send him home, it might to be with a pizza oven."

Note: I received a free copy of Magick & Mayhem by Sharon Pape in exchange for an honest review as part of a blog tour with Lori Great Escapes Virtual Book Tours.


Update: Check out Nadaness In Motion's exclusive interview with Sharon Pape as part of a blog tour for the third book in the series, Magickal Mystery Lore. Note: The books can be read as standalones; you don't have to read the books in order.

Keep up with the rest of the tour featuring more reviews, as well as guest posts and interviews here. 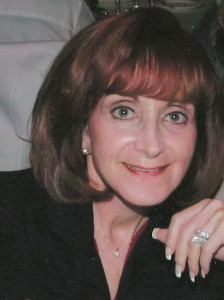 I started writing stories as soon as I learned how to put letters together to form words. From that day forward, writing has been a part of my life whether it was my first attempt at a novel in seventh grade or the little plays I wrote for my friends to perform for neighbors and family. After college, when I was busy teaching French and Spanish to high school students, I was also writing poetry — some of it in French.

After several years, I left teaching to be a full time mom, and when my two children started school, I went back to writing. To my delight I found that the muse was still there, still waiting patiently for me to come around. My first novel, Ghostfire, was published at that time. It went on to be condensed in Redbook magazine (the first paperback original the magazine had ever condensed.) Then came The God Children and The Portal. Redbook also published my first short story, which was subsequently sold to several foreign magazines. With two great kids, a golden retriever and a loving, supportive husband (whom I’d met at the beach when I was fourteen — but that’s a story for another day), I felt like I was exactly where I was meant to be in my life. But fate had another plan for me, and it went by the name of “breast cancer.”

Looking back, I realize how fortunate I was that the cancer was discovered at such an early stage, but at the time it was all very overwhelming. Once I was back on my feet, I wanted to help other women who were newly diagnosed, worried and afraid. I became a Reach to Recovery volunteer for the American Cancer Society and went on to run the program for Nassau and Suffolk Counties on Long Island. A number of years later, with the help of my surgical oncologist and two other volunteers, I started Lean On Me, a nonprofit organization that provides peer support and information to breast cancer patients. When Lean On Me celebrated its tenth anniversary it no longer required as much of my time, and I once again found myself free to pursue my first love — writing.