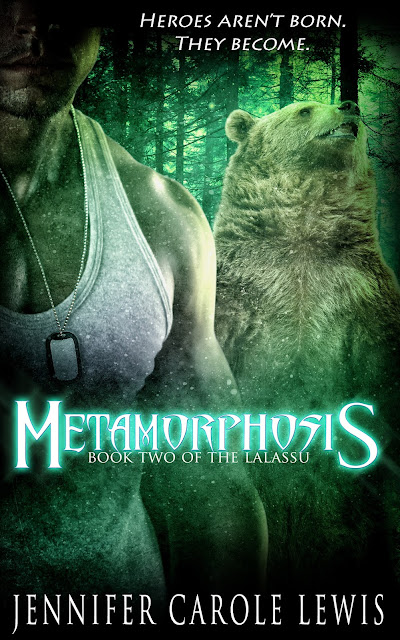 Metamorphosis by Jennifer Carole Lewis is the second instalment in the Lalassu series. While the beginning doesn't seem to start where the other left off, it is a fair continuation of the events of the novel.

While I feel that most of the book can be read as a standalone, I think reading the first part – Revelations - will make the reader guess the identity of certain characters, some events, connections (some of which will be right, others not) and connect the dots better than someone starting with this book.

The book is divided into five parts named after stages of healing a wound. I liked that, especially when moving forward with the book, the reader realises that there is a lot of progress and healing required by many of the characters.

"Living in the past doesn't change it. It only destroys the present."

Metamorphosis opens with former army corporal Ron McBride escaping from his captors and freezing in the Canadian wilderness. He carries the ashes of Nada, whom he was unable to save in the last book and hopes to give them to her family in a place called "Ekurru".

Almost frozen in the cold, Ron wakes up in Doc's cabin, where he meets his rescuers. Ron worries that his former captors would catch up with him or worse harm those who have come to slightly welcome him in this place, which he later discovers is home to highly intelligent massive-sized bears.

"The warmth hit him like truck, sparking an irrational temptation to crawl directly into the tiny fire to thaw his frozen body."

The book focuses on both Ron and Lily, whom Ron immediately falls in love with, and the metamorphosis of each of them; a psychological and emotional transformation for one and literal and physical for the other.

The theme of the hero remerges in Metamorphosis, where the former corporal has always wanted to be a hero; however, in one of his tours, he believes he failed his friends, who died, while he lived. The novel portrays Ron's constant struggle to be a better – advanced - human being as well as his attempts to be worthy of Lily.

While I understand the need to stress on Ron's problems and inward struggle, I still felt that it was too much at times, or becoming a bit repetitive.

The Lalassu are people born with supernatural powers. In Metamorphosis, we are given additional information and background on them. Lily and her family are Lalassu but also called skinwalkers, since they have the ability to transform into bears.

I enjoyed the use of psychology with the characters of Ron and Vincent, especially since the two characters are similar in several aspects, particularly being controlled by A.D., whose touch renders his victims his slaves.

We also see how Lily's brother and grandfather try to break A.D.'s hold on both Ron and Vincent, a hold that makes it impossible for them to speak or even hear their captor's name.

Several characters from Revelations make a reappearance in Metamorphosis with backgrounds on many of them, including Karan, who is best described here:
"Most people were too lazy to look past what they wanted to see and Karan had no problem with taking advantage of that."

"Karan never lost, no matter how long it took to achieve his victory."

I felt the chapters were too long, and thought they'd be quicker if they were shorter, since each chapter already covers several places or sides in the novel.

Ron's interactions – as well as those of the other characters later on - with the bears were rather cute. Ron's – and the reader's – first encounter with a bear in the book goes like this:
'"Good bear. Nice bear," he croacked.
The bear's ears went flat against its skull, exactly like an annoyed cat. It snorted and shook its head.'

Artful humour is prevalent in the novel to break the tension. An important aspect often forgotten or overlooked by writers.
"Your head is spinning fast enough to qualify for Exorcist Frequent Flier miles."

One of the most important aspects in the novel for me is character development. I was glad to see the development of several characters not just the protagonists. *applause for the author*

Metamorphosis is a novel of romance and journey of maturity and self-discovery, and it's full of beautiful quotes and imagery. I look forward to reading more in the series.

"It's easier to believe you are broken than to try and heal yourself."

Note: I got an advanced readers' copy (ARC) of Metamorphosis from author Jennifer Carole Lewis in exchange for an honest review.

Check out my review of the first instalment of the series, Revelations.


Also, take a peek at an excerpt from chapter one in Metamorphosis here.

Metamorphosis is currently available for pre-order via Amazon.
Posted by Nada Adel at 12:00 AM