Today, I'm featuring author Aria Glazki once more and her book Mending Heartstrings which has gotten a new bright and colourful cover. As part of the tour, there is a short interview, a guest post and tour-wide giveaway. 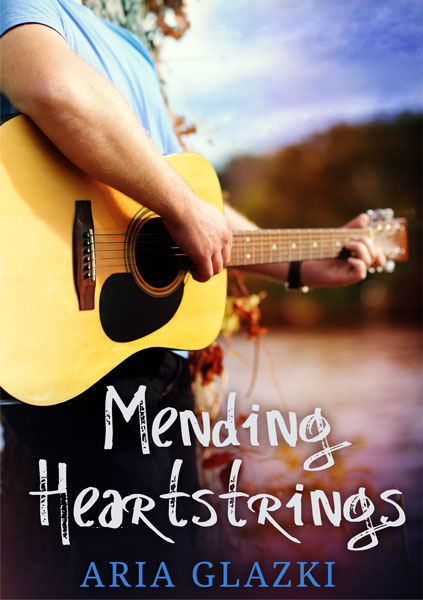 Kane’s a country singer who’s tangled with too many deceitful women. He’s learned his lesson: girls are for flirting and fun; emotions are for his music. But after spending a night with an earnest woman unlike any he’s known, he can’t force her out of his mind. So he goes in search of the woman he knows only as “Elle.”

On her last night in Nashville, the staunchly pragmatic Sabella found herself in a situation more suited to a romance novel than reality. Swept away, she ignored her rigidly self-imposed rules, succumbing to the fantasy just this once. But she knows real-world relationships have nothing in common with their fictionalized portrayals. When Kane unexpectedly shows up at her Portland apartment, she must choose between the practical truths she has learned and the desire for a passionate love she has struggled to suppress.

Despite the distance, Kane’s tour schedule, and their meddling friends, both are drawn to the chance for a romance neither quite believes is possible.

Tell us about Mending Heartstrings.

Mending Heartstrings is really about two people who both have reasons to avoid relationships, especially spontaneous ones, who still can’t deny the connection they feel during one lovely night together. But of course, they have to reconcile that interest with obstacles like living thousands of miles away and with their own trepidation, their pasts. So they each have to make the choice—do they even try, do they put in the effort, or do they simply give in to reality, to being practical?

And this is a choice many of us have to make when we first meet someone who interests us: are they worth the effort, and the potential of ending up hurt?


If you could choose to write from anywhere in the world, where would that be?


I would love to live and write in a flat in Paris—dashing out for fresh pastries (a.k.a. inspiration) and soaking in the creative legacy of the city, with incredible art, culture, and history from all over Europe at most a few hours away.


As a romance writer, how do you decide how hot or not your book is going to be?


The level of heat in my books is decided by the characters—sexually confident and adventurous characters demand more explicit, unabashed heat, whereas more timid or reserved characters are likely to keep their intimacy behind closed doors. Characters with different approaches to sexuality may bounce from one extreme to the other while finding the sweet spot for themselves as a couple. And of course, some characters’ relationships develop through their physical intimacy, in which case you’ll see those moments as that happens.

Any tips for new writers?

Take courses or workshops, and join writing groups with more experienced writers. Really pay attention to what other people are saying—but then sort through the pieces that ring true for you in your writing. After graduating with a Creative Writing degree, I was entirely demoralized with regards to writing. I sincerely thought I could never be an author, but a couple years later, a story idea wouldn’t let me go, and now here Mending Heartstrings is. So don’t allow the opinions of even “experts” to discourage you from writing if that’s your goal, just ensure you’re learning everything you can from their perspective and advice.


Any tips for old writers?


Break out of your genre! Constantly writing in the same genre can easily become formulaic, even across story lines, and while this can be quite successful commercially, it doesn’t allow for any growth as a writer. Eventually, writing essentially the same thing with different faces must get old, so try creating something that can’t possibly follow the path you’re used to and see what you can learn from the experience.


We authors may not like to admit it, but fascinating content doesn't stream endlessly from our fingertips—not for our books, not for our social media accounts, and not for blog (or guest) posts we write.


So many writers and authors are introverts at heart, preferring to keep to themselves. Some people, of course, are naturally outgoing and engaging and truly do seem fascinating with every comment they make. They set the bar impossibly high for the rest of us.

The pressure to be interesting at all times is perpetuated by much of the advice circulating the internet. And to that end, “fake it 'til you make it” is a pretty good motto. Projecting confidence encourages others to assume you actually know what you’re talking about. Unfortunately, it doesn’t quite help you figure out what to say, which can leave you writing about the impossibility of constantly producing engaging content.

So what's the most interesting thing about me? In my eyes, probably the characters in my books. Their lives, their relationships, their adventures and struggles and triumphs—all much more interesting than I am. Let's face it, there's a reason I'm not writing a memoir! Moreover, readers are quite lucky that most of an author's content is edited and revised before being published. Believe me, you don't want to see previously drafted options for this post.

Despite the struggle of coming up with a stream of fascinating content, and the occasional desire to pull all our hair out, authors continually return to the keyboard, reach deep down, and write something new, hoping you'll find it interesting. Not because it's our "job" or a requirement of book marketing, but because—introverted or not—we like engaging with all you lovely people who share one of our biggest passions: books.

One of my biggest hardships, personally, is always feeling like I'm talking at people. So let's turn this monologue into a dialogue. Tell me, what's the most interesting thing about you? And if you have questions for me, definitely feel free to ask in the comments!

Add the book on Goodreads: https://www.goodreads.com/book/show/27873304-mending-heartstrings

As part of the blog tour, Aria is hosting a tour-wide giveaway.

What readers have said about Mending Heartstrings: 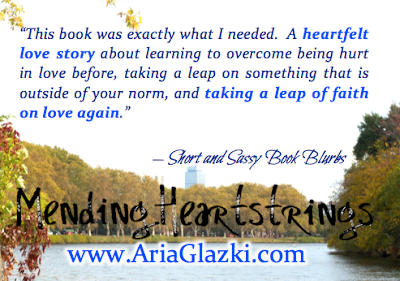 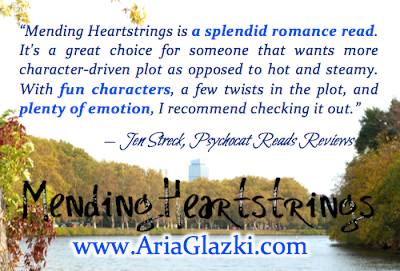 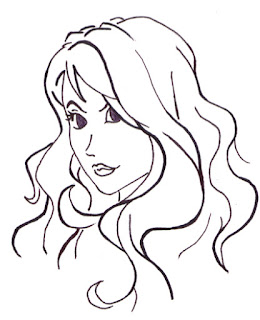 Aria’s writing story started when her seventh-grade English teacher encouraged her to submit a class assignment for publication. That piece was printed, and let’s just say, she was hooked!
Since then, Aria has run a literary magazine, earned her degree in Creative Writing (as well as in French and Russian literatures), and been published here and there. Though her first kiss technically came from a bear cub, and no fairytale transformation followed, Aria still believes magic can happen when the right people come together—if they don’t get in their own way, that is.
Other than all things literary, Aria loves spending time with her family, including her two unbearably adorable nieces. She also dabbles in painting, dancing, playing violin, and, given the opportunity, Epicureanism.