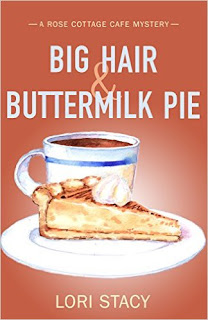 Mandy Hemphill is living her dream, running the successful Rose Cottage Cafe in Orchardville, Texas, from the ground floor of a converted, old—and possibly haunted—downtown home. She even had plans to grow her business with a new outdoor patio…if only the mayor wouldn’t have turned her down.
So when the beloved mayor is found murdered, Mandy finds herself among the suspects. And now business at the cafe is dropping faster than a fallen soufflé. How can she prove her innocence and save the Rose Cottage Cafe?
Thankfully Ben, the new owner of The Orchardville Gazette, doesn’t believe she’s guilty. As the two of them set out to find the real killer, they uncover one small-town lie after the next. But the closer they get to learning the truth about who killed the mayor, the more in danger they find themselves.

Big Hair and Buttermilk Pie by Lori Stacy is the first instalment in the Rose Cottage Café Mysteries.

The book is cozy to the point where you feel like you're part of the setting and the characters are your friends and I particularly enjoyed that about the novella.

The story opens with a prologue of a small-town Mayor and his wife and we're given the idea that he may be unfaithful. The first chapter opens at the Rose Cottage Café owned and run by Mandy Hemphill and we, along with the Mayor's wife, are informed that the Mayor has been killed and likely murdered.

From here, the novel begins to cover various angles of who could have killed the Mayor, while it is implied that the murder weapon may have come from Mandy's kitchen.

As Mandy tries to clear her name and find out who would want to frame her, her customer numbers keep dwindling. We learn that Mandy had submitted a request for a patio to be added to her café but the late Mayor had turned down her request.

Mandy, along with the new tenant in her building, Ben, who is resurrecting a local newspaper, begin to snoop around and ask questions, while the police continue to be anywhere but near the real culprit.

There isn't much imagery in the novel, but the sweet treats and other foods made at the Rose Cottage Café make up for that. Moreover, the writing and the characters are very realistic, which makes the reader feel as though they are part of the novel.

"It was hardly a secret to her staff that Mandy found baking therapeutic. It was a big part of why had chosen to go into this business in the first place. Of everything she did in her life, nothing made her feel happier and more at peace than baking."

The chapters are short and the pace is quick, prompting the reader to carry on without thinking.

There were a few repetitions in the novella that bugged me a bit, but overall it was a fun read.

I also liked that Mandy did not get the guy at the end but that after the crime was solved, all the good characters were rewarded in some way or other, like justice being served but in different ways.

Cozy and with many sweet treats, Big Hair and Buttermilk Pie is a quick read, that can easily be read in a day or sitting. There are also two recipes at the end of the book to complement the reader's appetite for the Rose Cottage confectioneries.

As part of the tour with Lori Great Escapes Virtual Book Tours, there is a giveaway. Enter using the Rafflecopter widget below. 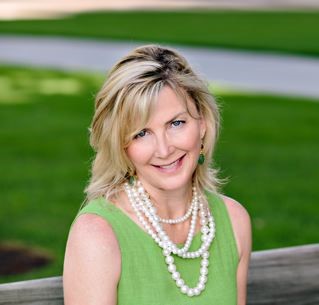 After her twenty-year career in magazine publishing came to a screeching halt faster than you can say “print is dead,” Lori Stacy decided it was time to finally turn the many stories she had been crafting in her head over the years into books.
Lori has authored a number of fiction and nonfiction books for young adults, has written articles for both print and online publications, and has written about hotels for one of the world’s leading search engines.
She lives in Texas with her husband and three children. When she is not writing, you can usually find her in the kitchen baking treats (which she says are for her children) or trying to train their hundred-pound golden retriever, an obedience school dropout.
You can find out more about Lori and her latest books at www.loristacy.com, provided she didn’t forget to pay her web hosting bill.

Note: I received a free copy of the book in exchange for an honest review via Lori's Great Escapes Virtual Book Tours.