For over a year now, I have been reading a sub-genre of mystery called cozy. I came across the genre while checking out book tours and Lori's Great Escapes introduced me to this fun branch of mystery.

While I have noticed some aspects about cozies, I couldn’t quite pinpoint them if a reader asked me what they were. Seeing as I was unaware of the genre before, I started searching and asking around about who writes Cozy in my mother tongue Arabic. And Surprise! We do not have the genre altogether in Arabic literature.

However, reading about cozies, I discovered that the founder of the genre is a well-read author in almost every language in the world. Agatha Christie! I had read her books in English, but they are widely translated into Arabic (I think all her books have been translated), which means Arabic-language readers have been introduced to the Cozy genre, although unknowingly.

My research has also shown that a story called "The Three Apples", narrated by Scheherazade in the One Thousand and One Nights, can be considered a cozy mystery.

What is a Cozy mystery?
By: Kirsten Weiss

“I say, Jeeves, there’s a body in the library!”
“Yes, m’lord. Shall I tell cook there will be one less for dinner?”

The above dialog is not from Agatha Christie – it’s an over-the-top cliché, but one which Christie bears some responsibility for. She created the cozy mystery genre. Her Miss Marple series, set in small English towns and villages, takes a gentler, more whimsical approach to the detective novel. Unlike gritty, fast-paced crime dramas, cozy mysteries are softer and slower – the focus is on people, place and puzzle. A reader can relax into the story world, secure in the knowledge that by the end of the novel, justice will be done.

As someone who writes cozies, I’ve given a lot of thought to what makes up the genre today. If the book you’re reading can tick most the nine boxes below, you may have a cozy mystery on your hands.

1) The violence happens off the page. The hero may stumble across a stabbing victim, but there won’t be any detailed descriptions of the gore, and we won’t “see” the victim’s murder. The tension in a cozy comes from the relationships and the puzzle, not from scenes of violence.

2) The hero or heroine is an amateur detective. This is the prime element differentiating the cozy from other types of mystery novels. The hero isn’t a hardboiled Private Investigator. She doesn't have access to DNA or fingerprints or the right to question suspects. Instead, the hero must rely on knowledge of the people involved and his or her ability to unearth the small town secrets that led to the murder.

3) Cozies are set in small towns, where people know each other. Readers are invited to take a virtual trip and immerse themselves in these charming, slower-paced fictional worlds.

4) The town is almost always populated by quirky characters, and these characters often have multiple jobs. In my book, The Perfectly Proper Paranormal Museum, for example, there’s a lawyer who moonlights as a taxidermist and a contractor who secretly runs a bookie agency.

5) Often a key character is a pet. And the animal can’t just be window-dressing, it has to be involved somehow in the story. An animal on the cover is a big hint you’ve just picked up a cozy.

6) Paranormal is optional. Paranormal can be an element in cozy mysteries, but I’m going to go out on a limb and say the majority of cozies do not truck in the supernatural. However, if there is a haunt involved, it’s likely a subplot. In a cozy, the murderer will always be a live human, with real-world means, motive, and opportunity. Maybe the butler did it, but a ghost never did.

7) No sex. This rule is starting to be bent, and indie authors like Jenna Bennett are leading the way. But usually, sex is treated by cozy writers the same way violence is – off the page.

8) Cozies tend to have strong subplots, usually combining a romantic subplot plus a secondary, often humorous, subplot. This gives the reader more opportunity to explore the world of the book and get to know the characters.

9) The hero/heroine cannot have a white collar job. Small business owners seem to be popular as heroes.

While Christie’s Miss Marple series easily fits the cozy bill, her Hercule Poirot mysteries would violate several of these rules today. He’s a private detective and often works in London. And heaven forbid a cat darken the door to Hercule’s pristine flat. But the Hercule Poirot stories still have a cozy “feel.” The violence is off the page, and the hero, Hercule Poirot, is quirky enough to provide his own comic relief. But no matter how you define her books, Agatha Christie made the cozy mystery genre, and the world of mystery writing is the better for it! 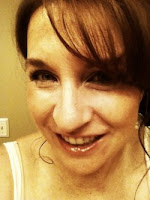 Kirsten Weiss worked overseas for nearly twenty years in the fringes of the former USSR, Africa, and South-east Asia.  Her experiences abroad sparked an interest in the effects of mysticism and mythology, and how both are woven into our daily lives.
Now based in San Mateo, CA, she writes genre-blending steampunk suspense, urban fantasy, and mystery, mixing her experiences and imagination to create a vivid world of magic and mayhem. 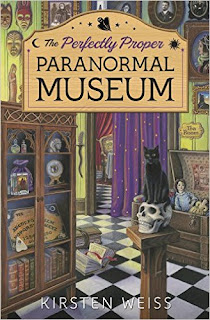 Kirsten has never met a dessert she didn’t like, and her guilty pleasures are watching Ghost Whisperer re-runs and drinking red wine. Sign up for her newsletter to get free updates on her latest work at: http://kirstenweiss.com

Check out Nadaness In Motion's book review Weiss' The Perfectly Proper Paranormal Museum here.
Posted by Nada Adel at 12:00 AM