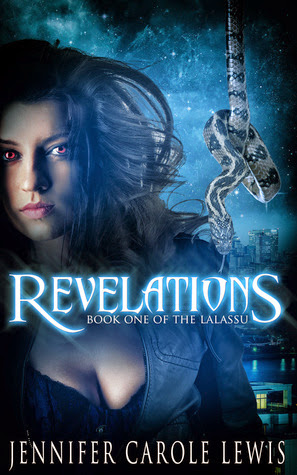 "Wherever there is prey, there are hunters. Jungle, ocean, city – the location doesn't matter. Predators will always find the vulnerable." – The opening line for Revelations and one that rings true on several characters and lines in the story.

Revelations (Book I of The Lalassu), by Jennifer Carole Lewis, is a quick-paced action-packed adventure mainly about a dancer with super human abilities. For years, Dani has been fighting her family's nagging that she take up the role of High Priestess for the lalassu people in order to serve as their guide and connection with the goddess. However, she wants no part in that and prefers her life as a burlesque dancer.

Dani also has a darker core, which she calls the Huntress. Often described as a slithering being, the Huntress is meant to be Dani's connection to the goddess. But something is wrong with the Huntress and it appears to be evil or as we later discover, is "corrupted".

"Concentrating, gathering her personal self… Dani reached deep into her psyche.
And touched a monster. The Huntress: terrifying, insatiable hunger; ancient rage howling for blood. Linked to the Goddess of her ancestors, it was part of her family's bloodlines, a genetic curse worse than any cancer or disease."

Dani needs to feed the Huntress every few weeks. But because she knows what the dark being will do to her victims, Dani decides to hunt down men who need to be taught a lesson, or simply "predators". An example is given in the first few chapters with Josh.

As Dani exits the club with Josh, we meet Michael Brooks and his cop friend Joe. Michael is a developmental therapist for children. He is kind of like an empath, who is able to read emotions and minds when he gets in contact with others, which he constantly tries to avoid. He uses his gift to discover the secrets children can’t share with anyone else.
"For everyone else, touch was something casual. It could at times become sensual or intimate, but no one else had to fear it. Every time Michael's skin touched someone or something else, he became privy to their inner thoughts, their darkest secrets, fears and hopes."

Michael senses something strangely dark when he enters the club Dani has just left. People who were out to have fun were in a frenzy of sex and rage.
The novel shifts between Dani, Michael and Dalhard. The worlds of the first two soon collide especially after one of Michael's clients is kidnapped, and Dani's family is threatened, when her two brothers, both with inhuman speed and strength, are also kidnapped.

Michael discovers that his charge, Bernie is a medium. What he thought were imaginary friends were actually the ghosts of the dead, bringing her messages and warnings.

Revelations has an abundance of beautiful but different characters. There are layers upon layers of and character-depth. Although the story is mostly about Dani, and Michael might be a second protagonist or an equal to Dani, others like: Bernie, Joe, Eric, Dalhard and Gwen, all play major roles in the novel. The secondary characters are few, but everyone is important including Nada and Karan. Everyone plays a role and I loved that about the novel.

One of the things I enjoyed is how Dani, the independent woman, fears what she can do to others. Her gifts are curses. There is a strong character duality, she's both good and bad. She sees the Huntress as evil and fears becoming a Priestess would change her. She also develops feelings for Michael and sees him as naïve and too good-natured, making her over-protective of him.

One of the main themes in the novel is that of the "hero". Michael likes comic books, which have shaped his definition of a hero. "Inside the pages, people who were different became heroes, not freaks. He liked to imagine himself as one of the heroes, using his secret abilities to help others while maintaining a mild-mannered persona."

As the novel progresses, Michael's view of the hero changes and develops. He sees Dani beat up a man who had been stalking one of the dancers. In an instant, the comic book hero who beats the bad guys changes before him after he sees it in a real-life incident. Michael also wants to see Dani as the hero, his, Bernie's and her family's hero.

Meanwhile, Dalhard, the evil and rich businessman/mastermind, is working hard to "acquire assets" or people with superhuman abilities. He tricks Dani's brothers, Eric and Vincent, and we soon discover he has abilities of his own, ones transferred through touch.
Dalhard later has his eyes on Dani, although he doesn't know anything about her Huntress or her legacy to become the next High Priestess for the Lalassu people, but he sees her as a golden ticket and a vessel for his experiments.

Dani and Michael have to team up to save the ones they care about as well as the whole of the Lalassu people because Dalhard will stop at nothing to "acquire" them for his personal use and for bringing new game-changers to the world of politics.

On another note, Jennifer Carole also has a way with words and I enjoyed her imagery and word choice throughout the book. (making it hard to pick certain quotes)
"But she triggered an uncomfortable wariness, a subliminal warning shivering and shredding the edges of his interest."

One of the things I particularly enjoyed about Revelations and Jennifer Carole's style is her "show don't tell" technique. Something many writers struggle with. An example is "Up close, his looks were even better: easily over six feet with broad shoulders and well-used gym membership." And "She looked like every demonic little girl in a horror film."

Revelations is a quick-paced novel that changes the common perceptions of the "hero", with journeys of self-discovery, acceptance and finding romance in unlikely places and people.

Note: I received a free copy from author Jennifer Carole Lewis in exchange for an honest review.
Note II: This book is for adult/mature audiences.