In a distant forest, vines cover an ancient fortress. Night and day, day and night, the rain hammers relentlessly. The Gothic structure stands strong against the merciless elements.

A princess locked within will burst forth one day as the sun bursts from amidst the clouds.

The land will live once again for though the future is dark, it is grey and shifting.


I made it late to last week's five-sentence fiction prompt by Lillie McFerrin. The prompt was "Strength".
Posted by Nada Adel at 2:38 PM No comments:

What would happen to world economics and financial markets if someone were to stumble onto a tree that could grow money? 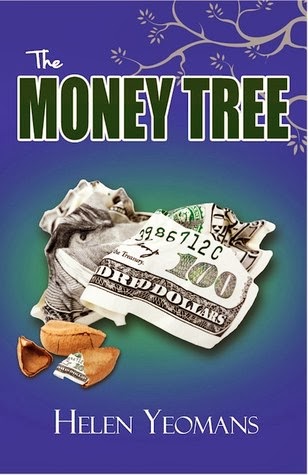 The Frisby family, in Helen Yeomans’ The Money Tree, possesses such a tree; they call it Meshach. They have two groves of money trees on Ledyard Island in Canada and they grow US dollars.

George and Jane Frisby and their son Michael “Mike” and daughter Daphne “Daffy” are a most unusual family. Mike is twelve years old but is an Uncle Scrooge when it comes to money and negotiations. Daffy is addicted to economics, the financial market and reading. Her morning breakfast includes whatever her mother makes alongside The Wall Street Journal.

Daffy is extremely annoyed by the monopolisation of money and currency and, at some point, considers doing terrorist acts to bring the world’s attention to this problem.

The Money Tree focuses on both the idea of owning a money tree and on family ties, particularly the relationship between the four members of the Frisby family. Later, the story moves to ties amongst the islanders and how they react to and with the Frisby family.

Frisby dollars have been circulating freely for nearly ten years. Their only problem is the scent, which can be sensed by animals not humans. With the occurrence of several bizarre accidents, of animals greedily eating twenty and hundred dollar bills, an investigation begins and it is discovered that money can be grown not just manufactured.

The novel mixes storytelling with economics, the first of I’ve seen on such a professional scale. Yeomans does a great job and has obviously researched her subjects more than well. The concept of Bitcoin is nicely explained for those unaware of it. We also see how the internet plays an important role as everything is circulated in the news and how things can go viral affecting the whole world.

The Money Tree is a highly interesting novel that would be fun for many readers from teens and people frustrated with the modern finance to professional investors and analysts, to just about everyone who imagines having a money tree is fun and exciting. “They have no idea!” as Jane Frisby puts it.

Amina Black: Excerpt and Giveaway: The Wolf at his Door by Adri...

Amina Black: Excerpt and Giveaway: The Wolf at his Door by Adri...: About the book: Twenty-one-year-old Alec Rune is annoyed when his older sister, Lucy, ambushes him with a blind date with her friend...
Posted by Nada Adel at 10:43 PM No comments:

Fingers trembling, she slowly unrolled the ancient document. The parchment was as fragile as it was old. A light scent of antiqueness mixed with the earth infiltrated her nostrils. Maya savoured the scent as a million thoughts and fears raced in her head.
Rumours of her family’s roots had been the hot topic of late. Though it scared her which bits of what people said were true and which weren’t, she desperately needed to uncover the truth.
She took a deep breath and exhaled, breathing out some of the fear and trembling from her body.
She gulped and opened the ancient document before her.
سترين النور يوماً
ستعرفين من تكونين
ومن نكون جميعاً!
سنكون قد رحلنا
وسِرُنا بين يديكي.
اغلقي عينيكي
وانتظري النور

The words were written in breath-taking calligraphy. Artistically entrancing in their own way, Maya thought.
The language was foreign but somehow it had suddenly passed down from generations and relations she had never met, seen or even heard of.
She closed her eyes as the words replayed themselves in her mind.
‘You will see the light one day,
You will know who you are;
Who we all are.
We will have gone,
By then.
Our secret will be in your hands.
Close your eyes
And wait for the light.’

Maya did close her eyes. From an endless stream of blackness, a rainbow-coloured light flowed into her sight. She inhaled as she saw her parents, grandparents and many generations before them. They smiled; then they began to move away from one another. Their forms began to change.
Each took a form that Maya, and anyone else, would have thought was a mere myth. A white light flooded each person as they transformed into otherworldly beings.
There was some speech in the distance but Maya couldn’t tell who was speaking. When she gave in to the attempt, she realised that the speech was coming from the stream of white that swept over every member of her long-gone family.
“Embrace us child,
Open your heart and mind,
Let them run free and wild.
We have always been there;
We are a family of creatures of air.
Rise child, as a tree rises from the earth!
Rise and spread the wings
You’ve carried since your birth.”

She watched the creatures take shape. When the last was done, in one voice that echoed in her mind, they said “Rise! And come to us!”

Maya opened her eyes. Tears had involuntarily left them, sliding down her cheeks. Her surroundings were dark but she saw that there was a light ahead, one she never noticed before; an opening leading directly to the night sky.
“Rise!” They had said.
She took a deep breath; she didn’t know what form she was meant to take. But somehow her body knew what to do. Inhaling again, she felt wings emerging from her back. Her body twitched, a white light bathed her and she took off into the night.
A lizard of old, a mighty dragon to behold.


This piece was written for the Finish that Thought no. 31 by Alissa Leonard contest. The challenge is to start with a given line and write a story in a maximum of 500 words. My story is exactly 500 words and I had to cut a couple of sentences to fit the word limit. This week's special challenge required a sentence in a foreign language.

My piece won the Judge's Challenge Champion: Rebekah Postupak said: You included not just one line, but an entire poem in Arabic! The lovely lines were at the story's heart, with its knowing caution to "wait for the light." -- And I assure you all skeptics that the final sentence, as glorious as it is, did not bias this award. :D
Posted by Nada Adel at 12:59 AM No comments: