The Case of Sampson's Leap by Alison Golden - Book Review 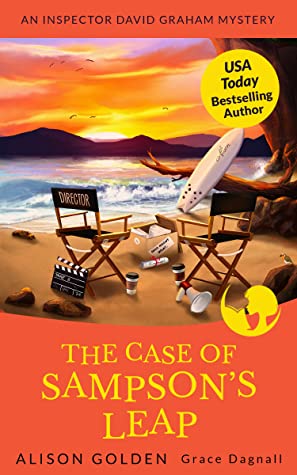 Book: The Case of Sampson's Leap

A confounding case in the present. A precipitous puzzle from the past...

Inspector David Graham knows all about history. After moving to the island of Jersey to recover from a tragic loss, he has done his best to leave painful memories behind. But sometimes it is not so easy to forget...

When Mia, a promising young actress, turns up dead beneath the jagged cliffs known as Sampson’s Leap, suicide seems the obvious answer. But after Inspector Graham interviews the victim’s conniving clan of associates, he’s not so sure. Jealousy, greed, drugs... With friends like these, who needs enemies?

Mia's mysterious death also shines a light on a far older case... The murder of three women, nearly two centuries ago. New evidence suggests that investigative rigor may not have been applied.

Can the dogged Inspector uncover the truth of Mia’s fate? Can a historical injustice be laid to rest? And can Graham finally reveal the secrets hiding in his own heart to the woman who knows him best...?

"I still don't know if she jumped, fell, or was pushed. Suicide, accident, or murder."

The Case of Sampson's Leap by Alison Golden is the eighth book in the Inspector David Graham Mystery Series and my – what – sixth book for Golden.

For those who are unfamiliar with the Inspector David Graham Mystery Series, it's fast; it's addictive; and you can't help but adore Graham.

Each book in the Inspector David Graham Mystery Series can be read as a standalone. So if you start at book 6 or 8, you don't have to worry about not reading the previous books, although I highly recommend them.

The Case of Sampson's Leap comprises 75 short chapters, making the book super-fast-paced. It opens with the death of a film student, Mia Thorne. 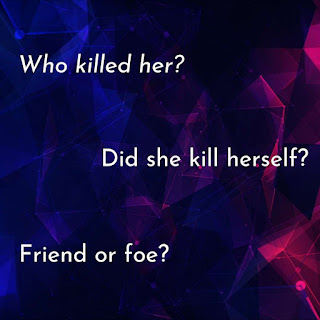 But as Inspector Graham and his team investigate and interview her friends, they find themselves in a super thick web of endless lies.

"To a woman like Mia Thorne, Noah Stimms was merely a toy, a dim foil, a moth to a flame, fluttering pointlessly but eternally hopeful around it until, eventually, he got zapped in a flash of scorching heat and acrid smoke. Mightier men had met similar fates with much the same outcome."

At the same time, the island of Gorey is nearing its bicentenary of Sampson's Leap. Sampson, an apothecary – a pharmacist, was accused of murdering three women. When the townspeople gave him the choice to either jump from a hill into the raging sea or be killed, he took the first option, only to jump and survive.

So the townspeople forced him to jump a second time and that was the end of Sampson. But the area where he had jumped had been named Sampson's Leap ever since.

Although the story focuses on Mia's death, we also get bits of history and new evidence comes to light about the 200-year-old Sampson case. After all, both incidents are related to the area known as 'Sampson's Leap.' 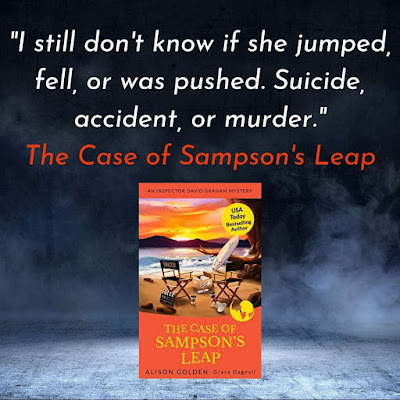 When reading The Case of Sampson's Leap, you'll share the police's irritation at the continuous dead ends. Still it's impossible to put this book down. I finished it in 2 or 3 sittings!

Having read several books in this series, there's significant character development for everyone. While David Graham is fully-developed character, his team began book 1 as a group of newbie officers. Now in book 8, they're smarter, faster, and more creative.

"Graham fixed Noah with a look that would have dented body armor."

Overall rating for The Case of Sampson's Leap by Alison Golden: 5 stars.

Note: I received a free copy of The Case of Sampson's Leap from its author Alison Golden being a part of her street team. This did not in any way influence my review of the book. I was already a big fan!

And while I originally finished the book in the allotted time, I had a reviewing-block (spent 7 months not writing book reviews). Hence my review is coming quite late.

Other books in the series and reviewed on Nadaness In Motion: 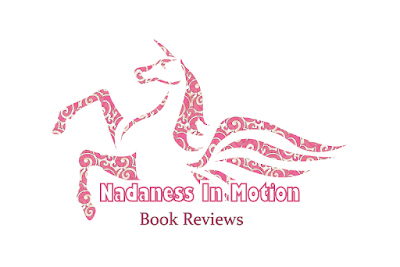 My first blog post for 2022 is a book review and it's a quick cozy mystery by a new author for me. 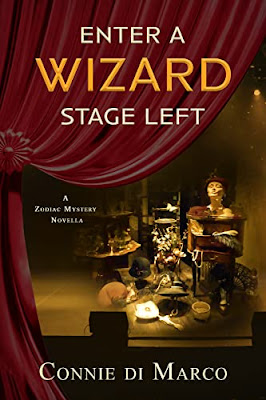 Julia Bonatti wasn’t always a crime-solving San Francisco astrologer. She was a young woman, engaged to the love of her life, preparing for a teaching career when tragedy struck. Her fiancé was killed in a hit and run accident. As Julia struggles with her loss and attempts to find meaning in her life again, she takes refuge with her grandmother Gloria.

But there’s little time for grief or rest because Gloria, a retired seamstress, needs Julia’s help. Gloria’s been hired to create costumes for a production of Agatha Christie’s Appointment with Death at the newly opened Theatre Mars in San Francisco’s North Beach neighborhood.

Theatre Mars is a stunning jewel, the cast is supremely talented and the script is brilliant. What could go wrong?

Julia gets the first hint of trouble when her new friend, the owner of The Mystic Eye bookshop, warns that all might not go well. Opening night will take place during the dark of the moon, the last three days before the new moon, a time that bodes disaster for any new project. The dire prediction comes true when the lead actress is murdered before the final curtain, echoing the play itself.

Julia discovers a vital clue to the murder, but a clue that puts Gloria’s life in grave danger. Can Julia rescue her grandmother before it’s too late? And will a black cat play a leading role?

"What?" Natalie looked around, confused.

Enter a Wizard, Stage Left by Connie di Marco, a novella and prequel to the Zodiac Mystery Series.

Comprising 19 chapters, the story is short and quick. Although the death scene takes place towards the middle of the book, it's not boring and you get to meet the main characters in future books.

Enter a Wizard, Stage Left opens with a play, a remake of Agatha Christie's Appointment with Death novel and the characters and the roles they'll be playing.

We meet the main character Julia, who has just returned to live with her grandmother Gloria following the death of her fiancé. Gloria is in charge of making the costumes for all the actors and actresses in the play. She enlists Julia's help ahead of opening night.

Julia receives foreboding news that something bad will happen during opening night.

And during the play's opening, one of the play's characters is killed on stage! And soon after Julia's grandmother Gloria disappears.

As Julia frantically searches for her grandmother, her curiosity allows her to overhear discussions and meddle around the theatre.

Enter a Wizard, Stage Left in fast-paced and you can easily finish it in a sitting or a couple of hours.

However, due to this short length, there isn't 'a lot of sleuthing.' I also felt that some of the dialogue was a bit childish or obvious. (But then again, my last read before this one was an Agatha Christie novel).

That said, Enter a Wizard, Stage Left sets the scene for future books. In this one, Julia is curious about astrology and begins reading books about it. The rest of the Zodiac Mystery Series introduce Julia as an astrologist.

Note: I received a free copy of Enter a Wizard, Stage Left by Connie di Marco as part of a blog tour with Lori Great Escapes Virtual Book Tours. This did not in any way affect my review. 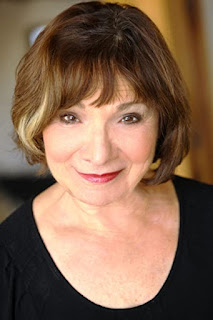 With the Zodiac Mysteries, featuring Julia Bonatti, a crime-solving San Francisco astrologer, Connie di Marco has combined her fascination with astrology and her love of writing mysteries.

Writing as Connie Archer, she’s the national bestselling author of the Soup Lover’s Mysteries from Berkley Prime Crime. You can find her excerpts and recipes in The Cozy Cookbook and The Mystery Writers of America Cookbook.

She is a member of International Thriller Writers, Mystery Writers of America, and Sisters in Crime.  She lives in Los Angeles but dreams constantly of the San Francisco fog.

As part of the blog tour, there's a giveaway for 10 digital copies of Enter a Wizard, Stage Left. So be sure to enter using the widget below.

a Rafflecopter giveaway
Posted by Nada Adel at 5:30 AM No comments: