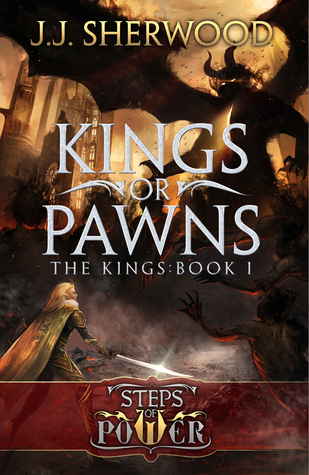 8,994 P.E.—The elven city of Elvorium has become corrupted to the core by politics. With his father dead and the Royal Schism at his back, Prince Hairem ascends the throne as king of the elven world on Sevrigel. Young and bold, Hairem is determined to undo the council’s power, but the brutal murders by an assassin loosed within the city threaten to undermine the king’s ambitions.
As corruption and death threaten to tear Elvorium apart from within, the warlord Saebellus threatens the city from without, laying siege to Sevrigel’s eastern capital. With the elven world crumbling around him, Hairem finds himself in a dangerous political balance between peace and all out war.

Damn! That was a good book! (And I rarely ever start my reviews like this!)
Kings or Pawns by JJ Sherwood is the first instalment in the Steps of Power series. And what a start!

The novel deals with Hairem, who has ascended the throne after his father's passing, and who has to deal with a council of corrupt members, all working on their personal gains and away from the needs of their respective elven realms.

There is also the army general Jikun, whom we see as a bit selfish but nonetheless skilled and who at least has an idea about the duties of his role as a general and the sacrifices he has to make.

Moreover, there is the general's captain Navon, who dabbles in necromancy, despite his general's orders and despite there being a death penalty for such a practice. I particularly liked Navon's character: cynical, funny, wise and above all kind and loyal.

I also loved and enjoyed Sherwood's ability in creating her settings, which is made clear from the beginning of the novel.

There is character development – for good or worse – for various characters in the novel, including King Hairem, General Jikun and others. I also loved Alvena, a mute handmaid with a surprising role to play. She and Navon were my favourites in the novel.

Basically every character in Kings or Pawns has a role to play. No characters are redundant; those who come and go like messengers are not given names as they are not important. The author is lauded for that.

"The temperature in Darival had fallen with the sun, who had also, it seemed, taken her blanket of clouds with her."

Kings or Pawns had me thinking throughout and occasionally wondering if some characters were not as they appear. It also grabbed my interest towards the politics of running a country, albeit a fantastical one, and had me wondering what happens when a good leader is surrounded by corrupt ones.

It is going to take me sometime to shake off the brilliant political intrigue and storytelling.

"Unlike the palace treasury, [the personal finances] of the council members were filling up like a halfling's pockets in a treasure trove."

I also liked the theme of entitlement throughout Kings or Pawns, which is seen in many characters but particularly the council members.

There are also several songs and poems in the novel, highlighting Sherwood's ability in writing both prose and poetry equally well.

The word flow throughout the whole book is exceptional. You don't want to miss a beat, even when things are calm and we're just given a description of place.

Kings or Pawns is fast paced and will probably keep you reading up all day and night as it did me. There might be some nail biting especially towards the second half of the book.

I would definitely love to pick up the second book in the Steps of Power series, but I need to get some sleep first!

My review is part of the August-long Steps of Power blog tour. I wanted so badly to go through the posts but did not want to come up on any spoilers. Check out the full tour here, which includes artwork, interviews, other reviews and more. 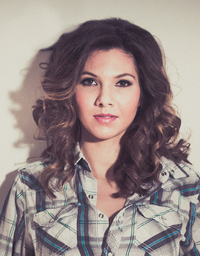 J.J. Sherwood lives in Ohio with her husband and four near-identical cats. Her childhood was spent tearing through the woods, playing out fantasy worlds, and tying Barbie to the roof so that the Power Rangers might rescue her. Middle and high school carried on this roleplaying, while college encompassed creating and refining over 250 characters in the world of Aersadore. When not orchestrating the lives and deaths of the people of Aersadore, JJ’s hobbies include drawing, video gaming, wearing a bathrobe, and eating too many baked potatoes.

Note: I received a free copy of Kings or Pawns from the author in exchange for an honest review as part of the blog tour.
​
Posted by Nada Adel at 5:08 AM