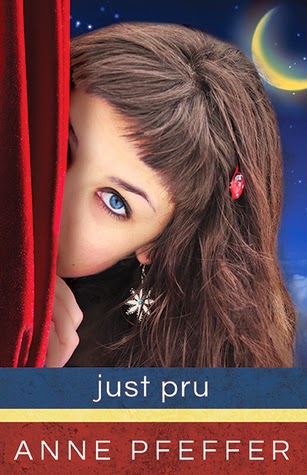 Just Pru by Anne Pfeffer is simply a beautiful book. It's down to earth, quick and mind-opening.
The book is about Prudence, a girl of twenty-five who has several psychological problems particularly those relating to interacting and dealing with people. The novel is narrated in the first person from Pru's perspective and opens with her therapist having died two weeks before and she has been unable to drive or go out into the world since. Dr. Abbott, her therapist, played a key role in helping her leave her parents' home and move to Los Angeles to become independent of her overbearing and overprotective parents.

Although her name is Prudence, she is far from being wise; at least she thinks so and acts like it often.
"Pru."
"As in Prudence?"
"Just Pru." I was not a Prudence and never would be.

Each chapter opens with a small bit from Pru's diary. In one of her entries, she writes:
"My mother told me once that my dad had wanted to name me Obedience, but she had intervened. She later claimed she had been joking, but I'd always half believed the story and amused myself by making up even worse named he could have chosen.
Subservience, Diligence, Timidity.
Each one, a bullet dodged."

Pru's experience with humans comes from the hundreds of shows and series, she's watched; however, these play an important role in her later interactions and transformation.
The novel opens with a fire in Pru's building. She is rescued but her apartment is mostly consumed by the flames. Not only is she now homeless and broke, she is terrified that if her parents find out about this, they will reign her back in and lock her up in their home in Clayton.

As the less-affected neighbours offer their services, Pru is housed by Ellen, a playwright and director, who is Pru's exact opposite: sociable, friendly, busy and independent. Pru finds it hard to talk to people, let alone look them in the eye. She has lived in her new apartment for two months but has never met any of the neighbours or mingled with them.

I like how the novel opens at a turning point in Pru's life. She has to think and go beyond her comfort zones, which aren't many, in order to survive.
I also like how author Anne Pfeffer shows and handles the psychological dilemmas of both Pru and her neighbour Adam. Each of them suffers from something, and don't find it strange when they talk about it. The psychological aspect of the novel is done quite well. Also, Pru constantly remembers what her therapist, Dr. Abbott, used to say or would have said in every situation, enabling her to push on and keep moving forward.

"I thought longingly of my pills. They were the colours of summer – a pale baby blue one, same as the sky, and a lozenge in cheerful green and white, like striped lawn chairs."
I don't think anyone has ever thought so lovingly of medication, especially for depression.

I also enjoyed the contrast between Pru and Adam; both have psychological problems, see therapists and take medication, but one manages to interact with the world and the other hides away. Adam is successful despite his problems and indirectly helps Pru with hers.

The novel also contains the element of mystery as to who started the fire that burnt half the building. Since, the fire started somewhere near Pru's apartment, we get the insinuation that she may have started the fire – even by accident.

The novel entails a play, which Pru is thrown in and becomes a coach to one of the actors. Starting this point, we begin to see the change in Pru. She slowly matures and feels more responsible. We also see how she begins to interact with the opposite sex, a gender she rarely had an interaction with before.
Since the novel is narrated from Pru's perspective, we see her fight her problems. Sometimes she
succumbs and at other times, she struggles and stands up to them. She is quite brave considering her condition. She is also "funny and smart" as one of the characters later tells her.

I like how Pru moves from wearing dark and loose clothes and trying to stay invisible to learning how to look, feel and want to be beautiful. All her life, she has been self-conscious about her size, but slowly she learns that it's not everything.

Just Pru is a story of self-discovery, beauty and maturity. It's a story of standing up to obstacles and family, a story of learning to make friends and helping others grow and become better.

Just Pru is a must-read contemporary.

Note: I received a free copy of Just Pru via Random Addition Book Tours (RABT) in exchange for an honest review for a blog tour.

Check out an excerpt of Chapter One in Just Pru here.