Odinsmal, the Rise of Jotunheim by Sammy Zakaria – Book Review 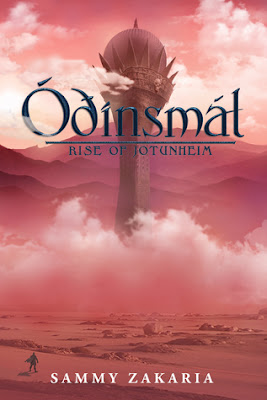 Forced to flee from his home on the island of Algir Oya, young Odin finds that the evil he'd barely escaped is already causing death and destruction on mainland Midgard. In a bid for survival, the humans of Midgard have united and taken up arms in a battle which Odin unwillingly must join against the forces of Jotunheim whose ruthless ruler, Loki, is enslaving humans to mine for the precious metal, Blóstein.

Befallen by a lack of strength and resources necessary to stand against Loki's army of savage footmen and bloodthirsty wolflike berserkers, Odin must venture with his friends Thedrick, Vili, and Ve beyond the boundaries of Midgard in search of an ally to stand with them against the Jotun invasion.

Odinsmal, the Rise of Jotunheim by Sammy Zakaria is a tale of Norse mythology unlike the popular Marvel comics and movies we have been watching for years.

The story follows Odin, a young warrior from the distant realm of Algir Oya. It opens with Odin’s father preparing to attack Jotun soldiers, but his plan fails because of wolf-like beasts called berserkers that were created and brought by the Jotun. After that Odin and two of his friends are forced to flee after their land is attacked and brought to ruins by these soldiers.

After that Odin, an Oyan or half-breed from the marriage between a Jotun and a human, begins a journey in which he thinks he is simply running away from the invaders only to have to befriend one of them.

The first in a series,Odinsmal, the Rise of Jotunheim is a story of discovery, curiosity, and prophecies. There are many mysteries surrounding several of the characters, particularly the young Odin.

“The berserkers continued to enter the Muspel capital. They channelled through the small roads and paths of Ginnungagap like a dark substance poured into a clear stream.”

One of the things I liked about Odinsmal was Zakaria’s cinematic technique in narration. It gave great visual and I could picture the story unfold as if it were a movie.

The downside to this technique, however, was that it made the novel longer and often made the language distant from the reader. Some parts, mostly in the passive voice, felt like they were stage directions in a play rather than storytelling.

I think the novel would be an easier read with a map at the beginning detailing the places the characters live in and visit. There were several parts where I was not sure which way the characters were moving. It would also help to know which domains are occupied by the Jotun and which are not, especially since the novel does not take up after any of the Marvel movies.

As the novel progressed, I had contrasting feelings about the book: There were too many characters that at some point I got lost as to who sided with whom and how some characters related to the novel. I realise that much of this will be revealed in part two but having a map – as I mentioned earlier – may help with that as well, since it would show which characters are located where and why would they be important to the story.

Although the novel is mainly about Odin, we do not see him in every scene. There are many intertwined events taking place at the same time. Some intersect, while others keep moving parallel to each other. 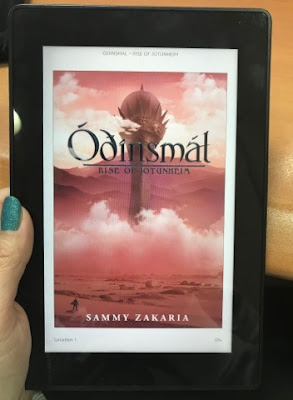 The Odinsmal series has great potential, especially with the revelations that come at the end. But it definitely needs editing – and I’m not talking about grammar, that was well done. No, I’m talking in terms of showing rather than telling, avoiding certain repeated words that jar the flow of the novel, and in some cases removing unnecessary dialogue.

Would I recommend this series? Yes.

One of the characters I absolutely loved was Gialp, a friend in the form of a foe. I will not divulge much about Gialp because that would entail spoilers. But he was kind, wise, and fierce all at the same time.

There were not many notable lines or images in Odinsmal but I enjoyed the action nonetheless. Odin’s character development was minimal, although there was some progress at the end. This is understandable particularly that there are more books in the series; although a little more development especially Odin would have given more depth to the novel.

For those who like mythology, particularly the Norse tales, Odinsmal would appear to them greatly. It’s a clean read (at least this book) with several fight scenes.

Odinsmal by Sammy Zakaria would make its own great action movie.

Note: I received a free copy of Odinsmal from its author Sammy Zakaria in exchange for an honest review.

About the author:
Sammy grew up in Denmark, but today resides in the land of meatballs and IKEA, Sweden. By day he works as an IT professional; by night a progressively balding couch potato. Aside from channel browsing and being fascinated with Norse mythology, he enjoys cooking, reading, and spending time with his family.

Purchase Odinsmal via Amazon
Posted by Nada Adel at 3:15 PM