The Children of Hurin – Book Review 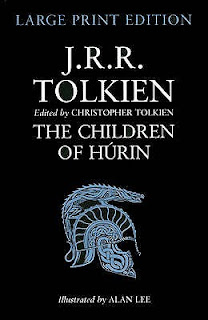 The events of The Children of Hurin by J. R. R. Tolkien or as I would prefer to call it The Series of Unfortunate Events that Befell the Children of Hurin, take place probably thousands of years before The Hobbit and The Lord of the Rings.

There are elves, dwarves, and Men, a wingless dragon, and lots of sadness and destruction.

The main idea behind the story is that Hurin curses Morgoth in his face, so the latter curses Hurin and his family, making Hurin watch his children unknowingly destroy themselves.

"I am the Elder King: Melkor, first and mightiest of all the Valar, who was before the world and made it. The shadow of my purpose lies upon Arda, and all that is in it bends slowly and surely to my will. But upon all whom you love my thought shall weigh as a cloud of Doom, and it shall bring them down into darkness and despair. Wherever they go, evil shall arise. Whenever they speak, their words shall bring ill counsel. Whatsoever they do shall turn against them. They shall die without hope, cursing both life and death."

The Children of Hurin opens with an info dump of the people in the book and who married who, including several names we never actually meet. There is a genealogy tree at the end of the book, which honestly should have been at the beginning because I had to go back to it several times while reading. The info dump wasn't necessary but just got me confused.

Hurin had three children: Turin, who is the main focus of the story, his sister Urwen, and his other sister Nienor who appears towards the end and is dragged into the curse laid upon father by Morgoth.

"The doom lies in yourself, not in your name."

The language is really tough to get around. True, I've been reading modern and contemporary fiction but this was a tough read. Reading this book, one sees how the elements of fiction have changed over time. There is no showing versus a lot of telling. The description is simpler and there aren't many alternatives to "said".

There is minor character development for Turin. Sometimes he's likeable and sometimes he isn't. But it is easy to sympathise and connect with him. In terms of imagery, there aren't many, but there were several sections of rich descriptions.

One of the things that The Children of Hurin has gotten me excited about is rereading The Silmarilion, where there is a powerful tale of Beren and Luthien. People in the story make many analogies between Turin and Beren. I also have The Book of Lost Tales part 2, which I plan to finally start.

"This man is not Beren. Even if he be both as fair and as brave. A doom lies on him; a dark doom."

It is interesting to learn that The Children of Hurin was originally written as a poem – a very long one "running over 2,000 lines", according to the notes section after the novel.