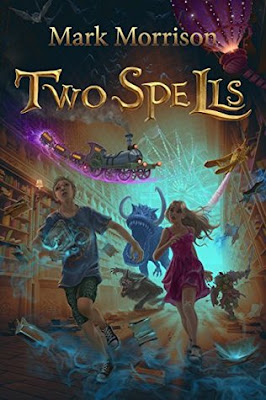 Sarah and her twin brother Jon are heirs to an ancient magical realm and its most valuable treasure, an enchanted library. The library endows readers with the supernatural means of crossing into the uncharted inner-sanctum of the second dimension, inhabited with peculiar and sometimes perilous creatures.

The children are emboldened with a wondrous mystical gift that no other being has ever possessed. But fate intervenes and triggers a disastrous inter-dimensional war that disrupts the fabric of time and space spanning multiple universes, tearing destiny a new and savage pathway.

The two must rescue their world from a phantom hybrid alien race controlled by a demented dark-wizard, Jeremy Sermack. They will either assimilate or be exterminated.

Will they be the saviors the prophets spoke of, or will they retreat to the perceived safety of their distant homeland?

I've been delaying the writing of this review for some time now, a few months actually. But here goes…

TwoSpells by Mark Morrison is a bit of an odd fantasy middle grade novel. Sarah and Jon are twins visiting their strange grandparents. Their mother leaves shortly after they arrive and the grandparents begin telling a tale that sounds like a bed-time story rather than "history." The events and the way they were told aren't believable.

I have mixed thoughts about TwoSpells. On one hand, the pace was really quick but the action and the magic itself took a while to occur. Until half of the book, no real magic had taken place and the reader is unsure how exactly Jon and Sarah are special. True, their mother has many secrets of her own but how are they special? What are their abilities? And, until the end of the book it's not clear what those abilities are.

I felt that the author was trying to cram too many genres together; fantasy with a bit of science fiction and some steampunk. I think it was too much and it didn't help me visualise a few scenes. It also stretched some scenes more than necessary.

However, the interesting part is that they visit a library where readers can join the characters within the books they're reading, provided that they don't alter the events of the book. The parts Jon and Sarah experience entering a book for the first time and their do's and don'ts was fun to read.

"To leave the story, simply open the book to any point in the story and begin reading backward. Finally, the most important rule of all: you are witness only. Do not participate. Do not attempt to change the story. You may end up trapped in there-or worse."

Overall, I think TwoSpells could be a good book but it needs a lot of work. Some comments or quotes that came in the end should have been made at the beginning. Things need to be clearer about Sarah, Jon and their strange but magical family. How does that magic work in this world… among other things.

Note: I received a free copy of TwoSpells from its author Mark Morrison in exchange for an honest review.