Today I'm doing a book review for Zoey's Post-It Notes by Zoey and Jeff Steiner, which is followed by a short interview with the father and daughter.

"Zoey's Post-It Notes is about something that happened to me that I would like to share with you." 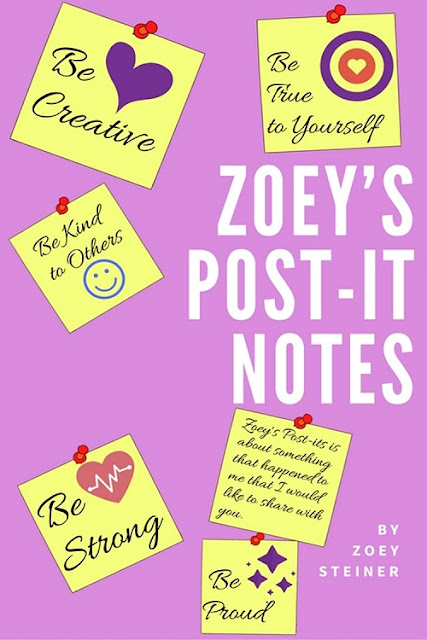 Zoey's Post-It Notes is a beautiful book on bullying and raising awareness about the issue especially for children.

It also a book about self-discovery and has a lovely motivational cover.
The book is divided into incidents then the stories behind each post-it/sticky note, as well as people.

Zoey's a fifth grader who has been bullied at school and has written about it. Some acts may appear trivial to some, but in truth they have a major impact on others, especially young people and teens.

"I finally decided I didn't need others' opinions… As long as it made me happy."

Just because it feels good, doesn't mean it's good. An example of this can be seen in The Flenguin Project chapter.

In the chapter titled "Wilson", Zoey talks about how Wilson would call her names and offend her, even if he doesn't necessarily hit her 'a lot'.

"It wasn't really bullying because he didn't punch or slap me."

Apart from people, there are pictures of the hand-written post-its, each with a something to motivate Zoey and others. The book tells the story behind each note.

Zoey's Post-It Notes is highly recommended for children, early teens and adults and parents alike. If you're 8-10 years old, then you should read this book. Children will easily relate to Zoey and her experiences and learn a few things as well as develop some positive habits.

At the end of the book, there are activities for children as well as classrooms to create their own post-its. They can be done by adults and parents.

Zoey and Jeff have also answered a few questions about the book and other related topics.

Interview with Zoey and Jeff Steiner

Q: You've mentioned a lot of names in the book, are these people's/your friends' real names?
Zoey: Yes, most of the names I have in my book are real names. That was kind of my way of thanking my friends for supporting me when I really needed them. But because Wilson was the bully in the book, I wanted to change his name.

Q: If yes, how do you think people like Wilson will react when they know you've written about them?
Zoey: Sometimes, I think that kids bully other kids more than they realize. And that they don't know how much that impacts the other kid’s life. Maybe this is what happened with me and Wilson. So, when he does find out that I wrote the book, I think that he would be mad and think that I accused him of something he didn't do. But that's just my opinion and others might think differently. 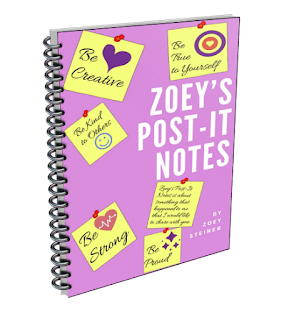 Q: This book is mostly by you, how did your father help you out with it?
Zoey: My dad did a lot. He recorded me while I talked about my sticky notes and my experience with the bullying. But he is the one who typed it and also got the book published, which I couldn't have done.

Q: What are you planning to write next?
Zoey: I don't exactly know what we are planning to write next. We did come up with the idea of talking to kids around the world about their experience with bullying. I think it would be nice to write more than one book and I would love to do it with other kids like me.

And some questions for Jeff Steiner, Zoey's father

Q: What was the collaboration like in the book? Was there anything that as a father you didn't want to add in the book?
Jeff Steiner: Zoey is such a wonderfully insightful, genuine, and heartfelt person. I knew the frame for the book. Who is Zoey?  What happened? How did she deal with it (the Post-it Notes)? Then just asked the questions to fill in that frame with her words. She is so incredibly courageous to open herself up like she did, and there is very little we didn’t include that she shared.

Q: Bullying is very common in schools and the main problem apart from teachers and parents not noticing it is that the children themselves mat not be aware that they're being bullied, especially if it's more psychological bullying rather than physical bullying. Have Zoey's experiences and her story changed anything at home or at school? How can parents make children more aware of bullying?
Jeff Steiner: You touched on a point that stood out to me. Zoey was not as bothered by the physical aspects of it as much as the verbal aspects. This issue has been exasperating for us as a family. The school tries in some ways. But, there are nuances involved with these types of situations that seem to freeze a parent out from being able to “do something” about it. I suspect that most parents are like us and have a pretty good idea what is going on. And, like us, are frustrated that there isn’t much they can do about it.

Q: Going through your list of publications, I noticed the I-Goal book. Can you tell us about that out? Also, did you include any of Zoey's experiences in it or did you publish it before Zoey told you about the bullying she suffered from at school?


Jeff Steiner: Thank you for asking about I-GOAL! My education, training and early career was as a counselor with youth and families. I used all of that to develop goal setting and professional development curriculum for high school aged students. I put those curriculums into book form to have it be on as many platforms as possible. This was when Zoey was a little younger.

Add Zoey's Post-It Notes on Goodreads, and purchase the book via Amazon.
Also, connect with Zoey via her Facebook page.
Posted by Nada Adel at 8:58 PM