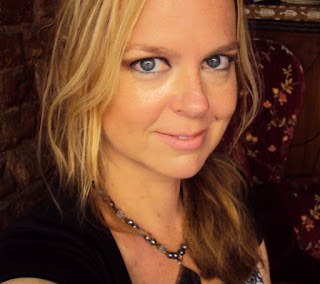 Theresa Braun was born in St. Paul, Minnesota and has carried some of that hardiness with her to South Florida where she currently resides. She enjoys delving into creative writing, painting, photography and even bouts of ghost hunting.
Traveling is one of her passions. Her favorite trip to date is to Transylvania where she followed in the steps of Vlad the Impaler. She writes horror fiction and blogs about all things dark. Her short stories are published in Under the Bed Magazine, Hindered Souls, The Horror Zine, Schlock! Webzine, and by Frith Books.
Upcoming work will appear in Hardened Hearts and Monsters Exist.

Now for the exclusive interview with Nadaness In Motion

Q: First off, thank you for answering Nadaness in Motion's questions. I'll begin with something many have probably asked and you've probably wondered about yourself, why do you prefer writing horror stories?
Theresa Braun: Well, I’ve been a bit of a Goth since as far as I can remember. My closet is almost entirely black. Also, I’ve always liked reading dark fiction and watching dark movies. There’s something attractive about our shadow side and things that can be dangerous, like the supernatural. So, I suppose the subject matter and the psychological aspect of horror really inspires me.

Q: Horror books often have a bit of psychology embedded somewhere in the book, how do you go about that part? (Research or do you have a minor degree in psychology or a psychologist friend…)
Theresa Braun: Although I chose to study literature, I came really close to getting a degree in psychology. Human motivations have always fascinated me. Fortunately, I do have one or two friends who are therapists, so I sometimes get to pick their brains about things I’m working on.

Going on about TB's books

Q: Tell us about your Groom & Doom, what inspired it? Is there a paranormal aspect to it?
Theresa Braun: I wrote that book as therapy after I got divorced. It was my first attempt at longer fiction, so it’s rather rough. It really needs some serious revision. I’ve grown a lot as a person and a writer since then. There’s some magical realism, but it’s not that supernatural in nature. It’s more of a dark romance with an unhappy ending.

Q: You've mentioned before that many people/readers have asked you if you've considered writing a sequel to Dead over Heels. Have you reached a decision about that? Would it be just books 1 & 2 or a whole series?
Theresa Braun: Right now I don’t have plans to write a sequel. However, it makes me happy to hear that readers want more because it makes me feel like I did something right with the story. Who knows, I might change my mind at some point. My retirement might involve revising or revisiting my early work.

Q: What are you currently working on? Can we expect other short stories like “Dead over Heels” or full-length novels like Groom & Doom?
Theresa Braun: At the moment, I am really into writing things about the length of Dead over Heels. It’s been my comfort zone for a while now. However, I’m experimenting with writing shorter pieces, and I would really like to eventually get in the habit of working on novels. It takes me a long time to write, so one of my fears is that I won’t finish something longer any time soon.

Q: What/where is your favourite place to write?
Theresa Braun: If I can travel, that’s my ideal environment. I love to sit at a café in an exotic location or in a hotel overlooking a place I’ve never been before. When I’m not traveling, I prefer to write in my bedroom. I pile up lots of pillows and my cats are snuggling nearby. Depending on my mood, I’ll play some music or not. I can really get into the zone in that comfortable space.

Q: What writing tips would you give to an author interested in trying their hand at horror?
Theresa Braun: The best writing tip is to read. Stephen King has been quoted as saying that if you don’t read, you will never become a good writer. I think that’s so true. You have to see how other authors are treating plot, characterization, and setting, including how to write about gore or how to leave it out or imply it. I’m part of a writing group and some of what we do is read established writers and talk about what they do that works. It’s really helpful.

Q: Most people say that writers should write at least 10-15 minutes daily, do you keep a writing routine or do you just write when inspiration hits?
Theresa Braun: Daily writing is a fantastic practice, but I can’t say that I stick to it consistently. Life sometimes gets in the way. For example, I had a root canal recently, and it left me with little desire to be creative. So, I switched to editing mode or reading mode. Ideally, I would love to write for at least an hour every day. When I’m really on a roll, I tend to write for about five hours at a time, sometimes more. It makes me a little delirious, but it’s a wonderful feeling to have been able to spend a chunk of time on a project.

Q: Is there anything else you'd like to add?
Theresa Braun: The only thing I’d like to add is that I have a few stories that will be released. Unnerving Magazine is putting out an anthology called Hardened Hearts which will include my piece entitled “Heirloom”. It’s about a therapist who inherits a mirror that has the power to send her into the past against her will. Her whole world gets turned upside down. I’m really excited about its release. And, I’m finishing up a monster story that will be in an upcoming Deadman’s Tome collection called Monsters Exist. There will be 15 amazing stories in there, and I’m thrilled to be alongside some very talented storytellers. My other pieces are still looking for homes at a number of magazines. Fingers crossed.

Also, check out Nadaness In Motion's book review of her novella Dead over Heels.