The book sounds exciting and from the excerpt, I already love the author's writing. 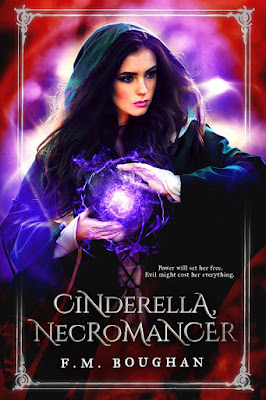 CINDERELLA, NECROMANCER is CHIME meets ANNA, DRESSED IN BLOOD and was inspired by a real medieval grimoire of necromancy from 15th-century Germany.
Ellison lost her mother at an early age. But since then, her father has found love again. He’s happy and doesn’t quite notice that Ellison does not get along with his new wife or her mean daughters.
When Ellison discovers a necromantic tome while traveling the secret passages of her father’s mansion, she wonders if it could be the key to her freedom.
Until then, she must master her dark new power, even as her stepmother makes her a servant in her own home. And when her younger brother falls incurably ill, Ellison will do anything to ease his pain, including falling prey to her stepmother and stepsisters’ every whim and fancy.
Stumbling into a chance meeting of Prince William during a secret visit to her mother’s grave feels like a trick of fate when her stepmother refuses to allow Ellison to attend a palace festival.
But what if Ellison could see the kind and handsome prince once more? What if she could attend the festival? What if she could have everything she ever wanted and deserved by conjuring spirits to take revenge on her cruel stepmother?
As Ellison’s power grows, she loses control over the evil spirits meant to do her bidding. And as they begin to exert their own power over Ellison, she will have to decide whether it is she or her stepmother who is the true monster.

Excerpt from Chapter Two: The Beginning

On the morning of my fifteenth birthday, my mother died. It was a cruel and terrible death, wrought with pain and suffering and moments of relief between the screams.
When death finally took her, the darkness hovered like a plague over our home, my father and younger brother and I only moving and breathing to survive, though if anyone had asked us why, we couldn’t have given an answer.
On the morning of my sixteenth birthday, the darkness descended in a form incarnate, though at first, we couldn’t see it.
Why should we have?
Father thought he’d brought me the best birthday gift a father could give his daughter: a new mother.
I saw nothing but a vile attempt to replace someone utterly irreplaceable.
I screamed, threw the pot I was holding at his head, and locked myself in my room for three days.
On the fourth day, six-year-old Edward knocked on my door.
“You can’t stay in there forever,” he said, his small voice wavering. “Father is threatening to call the locksmith. Mother—”
“Don’t call her that or I won’t speak to you,” I said.
He paused before continuing, an awkward pause that made me wonder—no, suspect—that she stood outside my door too.
“She is threatening to take a hatchet to your door,” he whispered, so soft I could barely hear.
Was she now? I wanted to see her try. Difficult, though, being on the other side of the door.
“And ruin Father’s fine craftsmanship? She wouldn’t.”
But I didn’t know if she would or not. After all, I’d only caught one glimpse and hadn’t even seen her face. Or looked in her eyes. I’d been a fool.
One’s eyes say so much more than most people suspect. While the superstitious bustle about, trying to hide their true names—for they believe there is power in names—they should really be wearing dark glasses and learning to speak while gazing at the ground.
Names? Please. Child’s play.
To learn the state of one’s soul, find their gaze and hold it.
But I’d thrown a pot and run away.
How differently things might have turned out if I’d only followed my own rule.

F.M. Boughan is a bibliophile, a writer, and an unabashed parrot enthusiast. She can often be found writing in local coffee shops, namely because it’s hard to concentrate with a cat lying on the keyboard and a small, colorful parrot screaming into her ear. Her work is somewhat dark, somewhat violent, somewhat hopeful, and always contains a hint of magic.

You can follow Faith on Twitter (@FaithBoughan) for plenty of flailing about food (she likes to cook!), TV shows (she watches too many), and world dance (did you know she's been performing & instructing in Bollywood-style dance for over 8 years?).


F.M. Boughan is represented by Bill Contardi of Brandt & Hochman.

Keep up with the rest of the tour for interviews, reviews, and other excerpts.