Academia of the Beast by KN Lee - Book Review

Academia of the Beast by K. N. Lee is a fast-paced fairytale retelling of the Beauty and the Beast with a dark twist. I couldn't put it down and finished it in two sittings! 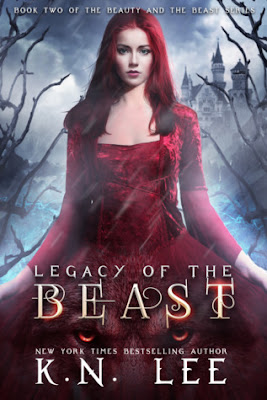 Allyn is a witch, a breed that's being hunted down by the rulers of Elastria. Her good-for-nothing boyfriend leaves her penniless to the point where the police take her small apartment right before the winter season where their small town closes-shop for six weeks.

"Allyn didn't want to be a princess. She just wanted someone to be good to her."

Right before the winter begins, Allyn goes to a party where she meets one of the princes of Elastria, Conall, a man she has met many years prior. The two connect and their once-innocent love is rekindled. From there, the novel picks up as Conall has to leave for the winter but promises to return once the cold season ends. Shortly after that Allyn is more or less kidnapped.

"As those words fell from her lips [Allyn] began to wonder who the witch was in this scenario… because she was sure Conall had her under a spell."

Characters in Academia of the Beast are beautifully flawed. You can't help but love them all, even the dark and evil ones. Character development is strong and pleasant to see.

I loved the twin brothers, my heart ached for Lennox, whom I despised at first, but grew to love as the book progressed.

"We found her."
Conall froze. "What?"
"You heard right…. Not just any witch. We found the one that Lennox told your father about. She sounds incredible. None of the others were able to do the things she did that night in the woods. And no one escapes Lennox."
"Whatever you do, don't let Lennox find out."

The novella keeps you on edge full-time with lots of dark twists even till the very end. It also had several beautiful lines and dialogues.

"She saw within him a soul just as lost as she was. When he held her hand, she was at peace."

One of the cool things that popped up a couple of times in Academia of the Beast were the quotes from the original Beauty and the Beast movie/cartoon.

Overall Academia of the Beast is a must-read. After I finished it, I went over a couple of parts I had enjoyed. I would definitely read this again.

Add Academia of the Beast on Goodreads.