"How could [Mark] tell his father the house was like the witch in Hansel and Gretel tempting the family with baked goodies before pushing them into the oven?"

Fountain Dead by Theresa Braun is a paranormal horror that runs on two levels and point of view characters over a hundred years apart. 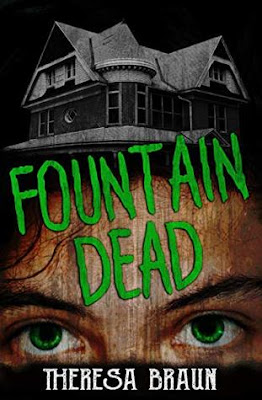 Though the book in narrated in third person, the point of view character is Mark, who in the present day or in 1988, is forced to leave his home because his parents have gotten jobs in a small city in the middle of nowhere. There they live in a grand Victorian mansion, where things aren't as they seem.

And as soon as Mark sets foot in, he begins to see things that shouldn't be there. For the reader, other events are happening in the "Victorian" but in the 1800's. A family is moving to the Victorian to settle there and on the way, tragedy strikes, leaving behind Emily, the only daughter in a household of brutes, well minus one decent brother.
As the novel progresses, the two timelines slowly begin to collide, which naturally doesn't bode well for Mark.

"Unbeknownst to Mark, the Victorian planned his summer boot camp the minute he stepped onto the property."

In terms of characterisation, I felt there were a lot of characters. In the modern world, there is Mark, his sister, their parents, and their dog. In the past, there is Emily, her two or three brothers, father, and two recurrent guests. At times, I kept losing track of who was doing what. In addition, in the present day, Mark begins to see or rather sense spirits. I tried to connect the dots between which spirit was which person in the 1800's but often failed.

In the first few pages, I felt that there was some kind of distancing and shifts in the narration like "the father asked his daughter" and "wrapping his arms around his wife, Dad…" and the like. That could just be me.

With two timelines in motion in Fountain Dead, we see each of the main characters struggling personally; Mark with feelings for Jack and leaving on a bad note, and in the late 1800s Emma is struggling with the death of her mother, and her brother Riley secretly blaming her for it.

"Following a drowsy blink, his sister was suddenly sitting up. The pipe Mom had found perched in Tausha's hand. Tobacco embers smoldered. Her eyes flamed red with malevolence, worse than any portrayed in a scary movie. "It's in the blood," she whispered.


Mark swallowed his heart and lost his balance.
With the next blink of his eyes, his sister slumbered just as before."

The book isn't divided into chapters but time periods. You can stop at the beginning of each shift in the timeline. 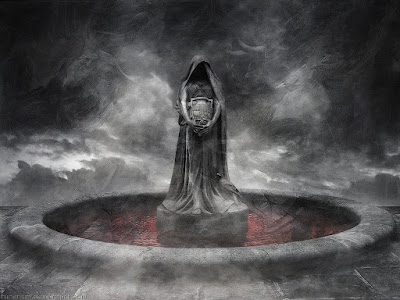 My biggest problem with Fountain Dead, and which is why it took so long to write this review, was with the ending. I felt confused. And now that several months have passed since I've read the book, I don't feel like I can review it well. My notes aren't helpful although I was able to connect some dots as I checked my notes.

I liked the setting in Fountain Dead, the Victorian mansion is the perfect place for horror and the house literally goes bump in the night. There are also several layers of horror here, the sections with Emily show the horrors of the civil war and her family of brutes. On Mark's end, there are several levels and instances of creepy. I really liked that.

Fountain Dead would make an interesting Halloween read and it will keep your mind working.

Overall rating: 3 to 3.5 stars
Note: I received a free copy of Fountain Dead from its author Theresa Braun in exchange for an honest review.