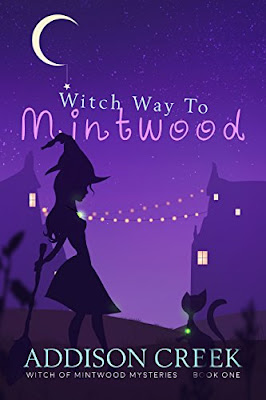 House falling down? Check. Pet sitting job with annoying clients? Check. Ability to speak to ghosts, which has the unfortunate side effect of having to listen to what they say back? Double check! Hot high school crush still in town being all successful and stuff while you protest his building projects? All kinds of checks! Did anyone say Witch of Mintwood? Yup! Just add murder and this will be a week to remember!

Character Guest Post by Lemmi, the witch of Mintwood (told by Addison Creek) – Exclusive to Nadaness In Motion

I’m Lemmi, the witch of Mintwood, and I’ve been thinking a lot recently about what it’s like to have a ghost for a pet.

There are a lot of downsides to having a ghost cat. In my case, it’s mostly because my ghost cat can speak. If he were quietly judging me with just his eyes, it might be less of an annoyance, but he isn’t. His favorite pastime is to order me around. What’s worse is that since he’s so helpful, and I secretly love him to bits, I usually let him. Even more important is that he was my grandmother’s before he was mine. My grandmother was the previous Witch of Mintwood. She entrusted the job to my care, and the job includes Paws the talkative ghost cat.

Together we solve crime. Ghosts are very useful for that. They can go where I can’t, especially the cat variety. Paws is always there in a pinch, in a jam, and in a murder investigation. He offers unfiltered and often unsolicited opinions that more often than not prove to be very helpful.

What is it like to have a ghost cat as a pet? I’d recommend it to anyone.

To assist us in our work, we also have my two roommates. Charlie and Greer are an integral part of the Witch of Mintwood team. Paws likes one of my roommates but not the other. Discord does not always lead to a lack of productivity, but in the case of Paws and Greer it certainly does lead to hostility. In the end we all get the job done. Come by and you’ll see. The four of us live together in an old farmhouse in Maine. Paws lives on the porch. He’ll be there to greet you.

Hello! I'm the author of the Witch Way to Mintwood series and the Spooky Business series! I live in New England and love it. I survive the winter by layering, good-natured complaining, and more layering. In case you were wondering. Hearing from readers is always lovely, so come visit me here me on my blog or Facebook.

Purchase Witch Way to Mintwood by Addison Creek via Amazon

Books in this series:

2. Witch Some Win Some

4. A Witch on Mintwood Mountain

Keep up with the rest of the blog tour for book reviews, interviews, character interviews, and spotlights.