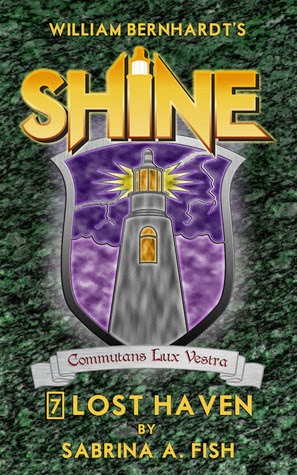 Lost Haven by Sabrina Fish is the seventh part in William Bernhardt's Shine Series. Each part is a standalone novella but related to the whole bunch.
Lost Haven opens with Camille trying to escape her ex-fiancé at a fair. During a confrontation, she wishes he were blind and her wish comes true or so we are led to believe.
Camille is a Shine, a person born with a special ability. There are other Shine people all over the world, but they are constantly accused of causing many catastrophes and acts of terrorism, especially by the media, and are therefore hunted down by individuals and governments and the church.
Camille is torn between being forced to sell her family's property and keeping it, but being unable to maintain it. Selling the property is not an easy task, especially for a Shine. Camille also suspects their neighbour, Mr. Walker senior, who has had his eye on their land for ages, of being behind her family's deaths.
Lost Haven is quick-paced young adult novella, so the reader quickly learns about Camille, the mystery of her parents' deaths, her life, friends, and her ability, though the truth about what she can really do is nicely stretched throughout the novella.
Lost Haven is action, sci-fi, romance and suspense masterfully woven in a novella that has all the characteristics of a full-length novel.

Author Sabrina Fish said she plans to contribute one or two more parts in The Shine Series to expound the characters, give them more depth and allow Jeremy to redeem himself.

About The Shine Series:

Shine is a multi-author series in which you want to read each author's work together. William Bernhardt wrote Shine 1-5, with his own story line and characters set in this world. It's set in the Shine world so that is similar to the other authors, but that's about it. And so on with Tamara Grantham's Shine stories, etc. It's called episodic fiction. One could read Tamara's work before Bill's and be fine, or Sabrina Fish's novellas before Tamara's and the reader would not feel lost.

Should one choose to go back and read them all, they'll learn more about the overall Shine world and be better for the experience, but one can read Lost Haven and feel like its a stand alone with an upcoming sequel as Ms. Fish has left it open to that. It has an ending, but one knows it continues.

Its sequel, Road to Nowhere is finished and was published on 11 October 2014.

Connect with Sabrina Fish via Twitter.
Posted by Nada Adel at 12:52 AM