A Fistful of Evil by Rebecca Chastain - Book Review

There is evil and there are Enforcers to do something about it. 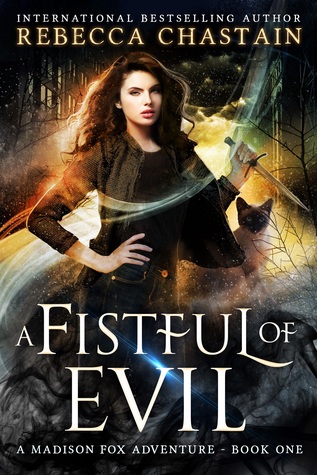 Madison, the protagonist and narrator of Rebecca Chastain's A Fistful of Evil, possesses an ability she calls "soul-sight", with which she can switch her vision to see people and the world from a different view and perspective literally.

When Madison switches to soul-sight or Primordium, she sees people's souls and life force. Every person's good or bad deeds give them a colour, a particular shade of white, grey or black.

Madison does not like her ability, after a sad experience in her teens, and wishes she could forget about it or get rid of it. However, while searching for a job, she finds herself part of the world of Enforcers and evil-fighting.

Narrated in the first person from Madison's perspective, A Fistful of Evil has a lot of sarcasm, owing to Madison's character, making the humour element ever-present in the novel. One of the thoughts that come to her is after starting her new job and having to buy a phone. She says/thinks “A cell phone yesterday. A video conference today. Watch out, world. I might get a Twitter account next!”

What I also truly loved about A Fistful of Evil is the fact that it does not have a love story or that the romantic element is neither the centre nor is it even in the periphery. Madison and her best friend Bridget do talk about men and Madison has a crush on several, however, there is no romance in the novel. Applause to Rebecca Chastain for that.

All the characters in the novel are well-crafted and loveable. Even the demon, one cannot seem to hate him entirely. Rose is funny, flirty and helpful. She is also the one who "babysits" Madison at first. One of the funny scenes I enjoyed was this:
“Mr. Pitt snorted. He redirected his gaze to Rose. “Make sure she doesn’t do anything stupid.”
“That’s above my pay grade.”

A Fistful of Evil shows Madison's character as it grows, falters and gets up again. Madison has several moments of revelation, of light and realisation, that lead her to her decision as to whether she wants to accept her soul-sight and become an Enforcer or not. It is also the little things that make us great people, as both Madison and the reader realise and as Chastain so beautifully reveals it.

There are many beautiful lines, images and scenes in the novel. One of them has Madison contemplating and weighing right and wrong when doing good; how much wrong or rule-breaking is a person allowed to do in order to do good?

“I may not be proud of my job history, but I’d never committed a crime before, let alone a crime in the name of my job. Then again, I’d never done anything as important as battle evil. My other jobs had been meaningless or boring—often both. At least as an enforcer, I was positively influencing the very balance of good and evil. That had to outweigh the minor transgressions I’d made along the way, right?”

Imagery is an important aspect in the novel and Chastain is highly lauded for her choice of imagery and humour. A favourite is the funny and realistic “But there was nothing like a hound of death on my heels to give me an Olympian-worthy boost.”
Also, “The horror reel played out in my head, with the hosts scattering across the continent, then the world, a pandemic of evil” is a highly visual image.
Also, when she was scantily dressed, she thought to herself: “embarrassment came complete with its own heating system.”

After battling a demon and nearly dying, Niko – also known as "Mr. Dark and Deadly" - takes Madison to refuel or "recharge" her energy, which includes having something to eat. One can proudly say that they will look at green salads differently after reading this novel.
“Niko selected Cobb salads for both of us—without bacon!—plus four large sides of grilled vegetables.
Screw that. I’d almost died tonight. I deserved something better than rabbit food.” Later, Niko explains why it is important to eat greens and why Madison's comfort food of fries and a milkshake do nothing to fill her up or recharge her energy.

Overall, A Fistful of Evil is an enjoyable, quick-paced fantasy novel. It's fun, it's different and it makes you think.
It is the first instalment in the series and I look forward to reading the second part.

An interview with author Rebecca Chastain is in the making! So stay tuned!

Note: I haven't done my usual page quoting because I was reading on ePub and the page numbers differ significantly from the .mobi or other ebook editions.