Bound by Prophecy is the third installment in the Bound series by Stormy Smith. Like its predecessor, it picks up where the second book left off – straight into the action. 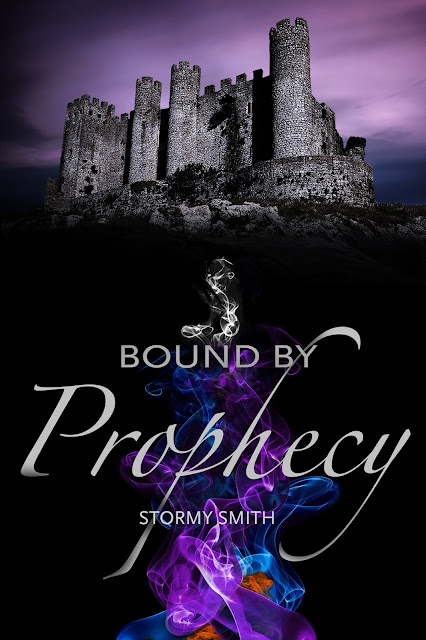 Amelia had fallen into a kind of coma after the battle at Cresthaven and Aidan could only reach her in his animal form.

I felt that I could have used a quick reminder or short summary of what happened in the previous books, even though I read them, but unlike the other two which I read almost simultaneously, there were several months between the second and third books.

Bound by Prophecy is more focused on Aidan and Amelia's relationship, which means there is more romance than the previous books. It's still a clean novel, but I sometimes felt I needed less holding hands and kissing and more moving forward with the plot, which has several twists and turns that I doubt anyone saw coming.
"His fear washed over me like the first swim of summer, the water like ice until you're fully submerged."

Quick-paced, the novel shifts between three perspectives this time, namely: Amelia's, Aidan's and Micah's. We also get to see the characters from book two more in-depth, especially Baleon and Micah.

When the characters started travelling, I got confused, especially since there was Cresthaven and Syria. What was in Syria and how did they know? This part was a big question mark for me especially since I didn't remember it being mentioned in the second book – it could have been there but my memory fails me. Also, why is their home in Syria not Cresthaven?

There were several instances in the novel that I felt Amelia was selfish, which is understandable and an important aspect in her character as a to-be leader, still sometimes I felt it was a bit much.
There is also a lot of speculation as to Amelia's powers and her Keeper power, which has been a bit of a vague subject since the first book.
"I'm not part of some destiny or prophecy. What I am is a curse."

There is also the strained relationship between Micah and Bethany, who dated briefly before Amelia was forced to be with Micah (end of book 1 & most of book 2). Still there were some indications of hope.
"Micah walked slowly toward Bethany, as cautious as a zookeeper approaching a big cat, and likely for a good reason."

Bound by Prophecy is filled with beautiful quotes and speeches by a variety of characters.

Here Cole tells Amelia about their father's choices:
"He looked at me, and said, 'Cole, there are times when you have to rip your own heart out to show it how to beat.' I thought he was crazy, but I get it now. We were his heart. And what he had to do to us tore him up, but we had to learn how to beat alone."

One of the characters that develops significantly in Bound by Prophecy is Micah, who moves from a prince put down by his mother to a strong leader.
The parts narrated from his viewpoint are interesting, quick and calculated. He doesn't have time to lose and the character development is clear. His speeches were among the best in the novel. Below is the confrontation scene between him and his mother, Queen Julia.

"Power is held by those who take it. It is kept by those who wield it unflinchingly. It is earned by those who are willing to compromise anything to achieve their purpose."
"No mother," I interjected, "that is where you are the one who has it wrong. Power is earned by those refuse to compromise their ideals and beliefs. It is kept by those who put the greater good before themselves. It is held by those who are supported and believed in. Power is merely having the resources to accomplish your objectives, and it is fleeting to those who throw people away like garbage when they don't conform.
"Power is celebrated and revered by those who benefit from it," I continued. "You have maintained your power through coercion and fear, and that is why you are dying. You couldn't sustain your power because it was never meant for this purpose. You are dying because your life is not worth the air you need to breathe. You're dying because you are evil in the world needs rid of you."

Although Bound by Prophecy was not my favourite book in the series, I enjoyed the first and second books more, it still earns a 3.75-star rating and is an interesting, fast-paced conclusion to the series – which Stormy Smith has said she might write new books using other characters J

Note: I know this review is long overdue – I finished the book in time but I did not have time to write the review. My apologies for the delay.

Note II: I received a free copy of Bound by Prophecy from the author and as part of a blog tour in exchange for an honest review.