Excerpt from Skye by Kimberly Loth


Rowan Winters is completely in love. With a shifter dragon. 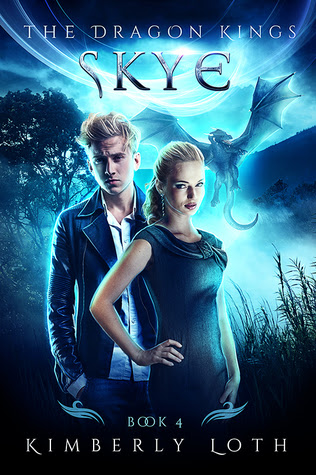 But the drop-dead gorgeous Skye only thinks of Rowan as her best friend. But when she turns up in his room in the middle of the night in tears, he yearns to do whatever he can to help her. Even if that means running away and letting his family think he’s dead.

Skye’s entire world turns upside down the day her scales turns black. She knows she’ll have to flee to find answers. But she wasn’t planning on Rowan coming too. She just wanted to say goodbye. He is so eager to help that she can’t leave him behind even though she knows she’ll never be able to love him in return.

Together, they fight off murderous dragons and uncover sinister plans. But can they find the answers Skye so desperately seeks? And can Rowan sacrifice everything he knows to win her heart?

Skye was a coward. She knew that, but she couldn’t bring herself to stay and watch Sid and Aspen commit suicide. There was no way the council would allow Aspen to become queen.
Not to mention that then Skye would have to know the exact moment when she died, because anyone who pledged loyalty to Sid would die the second he did. No, running away was better. She should have enough time to get to her parents before death came. She’d able to say goodbye.
This was her fault. Pearl had told her to keep Aspen safe. Instead she’d gone and made everything worse. Maybe if she’d kept Aspen at home, Sid would’ve been fine.
If she’d never given Sid that damn loyalty seal, she wouldn’t be this close to death. She wasn’t sure what she was thinking at that time. Part of her thought he’d make it. Another part didn’t care whether she lived or died. It wasn’t like she’d have much of a life anymore.
When Sid became King she found Everett and begged him to remove the seal that marked how much she loved him. He did and now she longer had a swirl of gold on her ankle. But Everett warned her there would be a price to pay. She gladly paid it at the time, but but she hadn’t expected to feel so empty.
For a half second she thought about heading to Everett’s instead of her parents. Maybe he could remove the loyalty seal before she died. She shook her head. How cowardly of her. The price would not be worth it. That was for sure.
She was only fooling herself though. She would make the same decision if given the choice. Aspen was the only way they could possibly survive. When Skye dropped Aspen off , there were three possible outcomes. One, she and Sid would die and all those with loyalty seals would as well. Two, Helios, the final dragon that Sid needed to secure all the loyalty seals got to him before the council had a chance to killed him. Or three. Aspen could be become queen. She’d have to convince the council that she should be queen and pass the queen’s tests She hoped Aspen could do it.
She felt her wings tiring. This could be the beginning of her death. She hadn’t known anyone who had died because of the loyalty seal and didn’t know how it worked. She spotted a lake below her and decided to stop and get a drink. She had to make it home.
Skye landed a little rougher than normal. This had to be the end. She staggered over to the water and took a deep drink. The water sparkled under the full moon. Skye stretched her wings out and swiveled her neck around to scratch her nose. She froze. Her wing was no longer silver.
This must be part of her death. Or at least that was what she tried to convince herself of. Adrenaline coursed through her veins and she no longer felt tired. Dragons didn’t change color before they died. In fact dragons never changed color. Except when they became king. Then they turned black.
Skye spun neck around the other direction. It was more than her wings that had changed. Her whole body was now a deep coal black.
This was impossible. There was no way she could become king. Sid was king. Unless he died. Then someone else would take his place, but that someone had to be a full royal dragon and male. Of which she was neither. There had to be some huge mistake. This had to be a dream. She stuck her head in the cold water and came out again. Still black. This wasn’t possible.
Unless.
That stupid prophecy.
The one that said three kings would rise. The one that said they could come from other races. But she was still female. Something was definitely wrong. She was also still very much alive. She couldn’t go see her parents now, not like this. No, she had to go see the one dragon who could explain how this happened.
She wracked her brain trying to think of everything she’d learned about the prophecy. She loved history and so she studied a lot, but this baffled her. Nothing in the prophecy said anything about a girl. She’d spent hours listening to Everett’s boring details about the prophecy, yet he hadn’t mentioned that females could become kings. He was so in for it.
Goodreads / Amazon 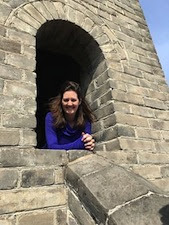 Kimberly Loth can’t decide where she wants to settle down. She’s lived in Michigan, Illinois, Missouri, Utah, California, Oregon, and South Carolina.
She finally decided to make the leap and leave the U.S. behind for a few years. After living in Cairo, Egypt for 2 years, she's decided to go to the Far East and currently calls Shenzhen, China home. She loves romantic movies, chocolate, roses, and crazy adventures.
Website / Goodreads / Facebook / Twitter