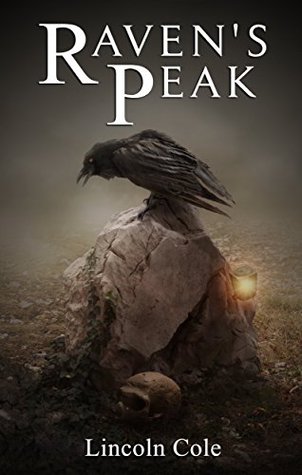 Raven's Peak by Lincoln Cole is a fast-paced paranormal action thriller. It was also quite scary in places, and were it a movie with a bit of sound effects, it would definitely be creepy. It is the first instalment in the World on Fire series.

The novel opens with a lengthy but action-filled prologue where we are introduced to Abigail, a demon hunter, who was out on a mission but had been possessed by the demon she, along with two others, was sent to destroy. Her mentor, Arthur goes to rescue her and is instead taken by the demon after a bone-breaking supernatural fight in a church.
Though long, the prologue is eventful and exciting.

"What stood before Arthur was only the shell of the girl he loved. Something else was in control. He could feel the rage and hatred emanating from Abigail's lithe body. Her skin was covered in a heat rash, her flesh barely containing the demonic presence within."

After the prologue, the novel begins five months after the events at the church, where we meet Haatim, a theology graduate who recently lost his sister to cancer and returned to the US from India, feeling angry at his father and God. He is given a kind of freelance job, by a man named George, to take pictures of Abigail, who is seen following George.

From there, things progress as Haatim is thrust into the supernatural world of which he had no knowledge. Abigail attempts – at first – to withhold information regarding Haatim's father, who is a member of the Council that sanctions the missions against the demons.

The duo then flees from otherworldly creatures trying to kill or capture them. Abigail, secretly, tries to find out more about the demon that took Arthur and seeks to save him.

"They could feel the supernatural presence, the sheer wrongness of it, as easily as he could. Even the forest could sense something was amiss."

Abigail is tasked to go to Raven's Peak after rumours that there might be a minor demon in the area. From there, things take a whole new level of surprising and scary for both the demon hunter and Haatim.

Character development in the novel is significant for both Abigail and Haatim. Abigail is also a sarcastic though often serious character, making her interactions with Haatim quite funny, especially since he is new to the whole supernatural scene.

"I thought you said I wasn't worth anything to them without the pictures."
"I didn't think you were," she said. "Turns out, you're worth a whole hell of a lot."

The only things that can be said are that I felt that the cover did not reflect the content of the novel, and that I would have liked a small explanation as to how demons move if they are not possessing a body - from a fictional perspective.

Raven's Peak had many scary parts, some nearly had me biting my nails with suspense, but overall it wasn't horrifying. The pace is very quick, even the longer chapters slip by and you're hungry for more.

"What happens when I don't come back? When I become the new threat and you have no one else to send?"


Check out the book trailer for Raven's Peak here.

Note: I received a free copy of Raven's Peak from the author in exchange for an honest review (which was originally planned in October.)
Posted by Nada Adel at 6:26 PM