Book: Bentwhistle the Dragon in A Threat from the Past
(Book I in a Trilogy)
Author: Paul Cude
Genres: Adventure, Fantasy, Young Adult, Sports
Publication date: 19 October 2011

Bentwhistle the Dragon in A Threat from the Past is an adventure story children and adults alike will love, about the present day world in which dragons disguised as humans have infiltrated the human race at almost every level, to guide and protect them.
Three young dragons in their human guises become caught up in an evil plot to steal a precious commodity, vital to the dragon community. How will the reluctant hero and his friends fare against an enemy of his race from far in the past? Fascinating insights into the dragon world are interspersed throughout the book. 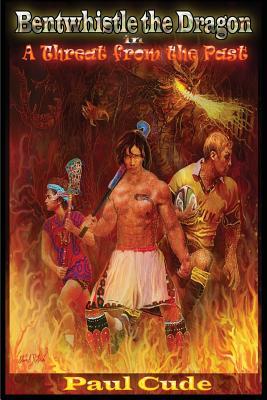 After that the reader gets long alternating chapters narrated in the third person for two characters: Flash and Peter. Other chapters include a number of prisoners, where the reader gets a different from view point from the characters.

The chapters with Flash are action-packed, exciting and fly by. The same cannot be said for the chapters with Peter, which are mostly mundane and boring, not to mention very slow. Some of Peter's chapters also involved sports, which I were not enjoyable for me and felt could be cut out. Others might find them fun, but I thought they were too long and not needed. At some point, I thought one of the games was going to affect the dragons in the long run, but it just turned out the dragons in human form were too tired, so I felt it was wasting time (for me).

"He knew now that his life hung in the balance, dependent on whether he could choose exactly the right window of opportunity, show one even exist."

There was a lot of unnecessary descriptions and scenes for me, again in the chapters with Peter in them. At some point, I got the impression that every writer wants to include everything they've thought of in the book, but some of it just extended the length of the novel, which is an already long one. At some point, I felt I wouldn't be able to finish the book but I wanted to get to the end, so it spurred me forward. However, there were some points where I started skimming and skipping bits just to finish.

"It was something all of his years of training had never prepared him for…fear, deep down, genuine fear, with a capital F."

The novel would have moved a lot faster if the chapters were shorter, especially since there were breaks within the same chapter to alternate scenes and character perspectives.

One of the things I truly disliked about Bentwhistle the Dragon was how the narrator addressed the reader in some parts, like saying "Something quite literally magical happened." And "I don't mean no energy to run, jump or swim. I mean he simply wanted to give up."

When emotions and events are repeated over the course of the novel, they are often repeated using the same description or terminology. There were also bits between brackets, like the author was explaining to the reader what was happening. I preferred if that were integrated in the text itself. These bits bothered me.

The problem that kept nagging at me was that Peter Bentwhistle is too ordinary. There is nothing special about him that would promote him to hero, as opposed to Flash who is likeable, practical and brave, and who has all the qualities that make him a hero.

"Risk and thrill seeking were simple part of his nature, as much as a twenty-foot tail, brown shiny scales, and teeth that a crocodile would die for, were part of his body."

On the other hand, I loved the Lavapool game. It reminded me of Quidditch from the Harry Potter series, only played by dragons. I would have preferred I was given an idea how it was played rather falling right into it and having to figure it out for myself.

There were however many interesting images and similes.

"Richie, normally cooler than a cucumber in a Siberian fridge, flinched just a little uncomfortably in her seat."

"Huge icebergs the size of houses littered the landscape like popcorn on a cinema floor."

I have no idea how the cover relates to the novel. There were no incidents of Native American history or events. I rarely comment on the cover, unless it's truly amazing or if it strangely does not reflect the content of the book.
I also couldn't find the threat from the past. I think the novel needed some tuning in terms of redundant parts, so as not to lose the reader, and in some cases not to bore the reader as well.

Overall rating: It took me a long time to write this review because I felt the novel didn't meet my expectations when I finally finished it. On closer inspection of my notes and while rereading bits for the review, I think a fair overall rating would be: 2 stars.

Note: I got a request from the author for an honest review.

The book is free via Smashwords here.