A little overdue but finally here. The Drago Tree by Isobel Blackthorn is a story of self-discovery and understanding oneself and life. The story is mainly about Ann, along with two other characters, Domingo and Richard, who teach her different things about herself and life. 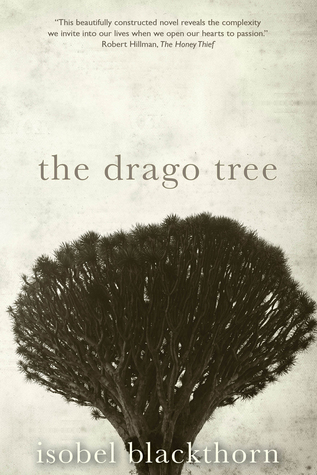 Ann runs away from an abusive husband and travels to the exotic island of Lanzarote, a Spanish-speaking island off the coast of Morocco. Personally, I had never heard of it but having read this book, I fell in love with it.

The Drago Tree is a beautiful example of travel literature, as Blackthorn gives the reader exquisite detail about the setting and the country.

"For Ann, names were important. A change of name wasn't just about change of ownership; it involved change of identity. Even married to Andrew, she'd held onto Salter."

When Ann arrives on the island, she begins by writing a single sentence and is quite critical of herself. She meets the handsome author Richard, who gives her harsh criticism, but also introduces her to the local potter-maker Domingo.

Ann then begins to write regularly, but the story takes up after many of her experiences and her family problems, particularly those of her sister and failed marriage – both of whom we are introduced to in the form of flashbacks.

"Too many times she'd been shut in this courtroom of a marriage, forced by her own sense of injustice to defend her position to an irascible judge."

Some of the flashbacks were a bit confusing for me, especially when they were in a new chapter. Both Ann and Richard have flashbacks.

The Drago Tree is full of stunning imagery, quotes, lines and setting. The pace is very slow; however, the book is an experience in of itself.

The overall description, whether for characters, emotions or setting, was done very well. If Blackthorn ever decides to give writing courses, I'll be the first to sign up. The narrative is simply brilliant.

"He was a bulldozer of a man, with a deep gravelly voice. He had bushy eyebrows, flaring nostrils, and a coat hanger of a moustache."

I particularly liked the idea of Ann writing, first a sentence, then later a book. The writing process is a kind of catharsis for her – and many writers can relate to that. It was interesting for me to see how her views of her writing and of Richard develop in the course of the novel.

"While her writing allowed for a certain outpouring of emotion, the narrative was about as therapeutic as a knife twisting in her guts…May be she needed to change the characters' names, make them less like their real life counterparts."

Character development is significant for the main character Ann. I liked Domingo, whom Richard sees merely a source of information and history to help with his book, but who is truly a wiser person than Richard, with his colonialist views, is.

"Before long she was a faucet turned on full, words blasting out of her, tumbling so fast her pen could scarcely keep apace."

To get a feel of The Drago Tree, check out an excerpt along with a short interview with author Isobel Blackthorn here on Nadaness In Motion.

Note: I received a free copy of The Drago Tree from the author in exchange for an honest review.
Posted by Nada Adel at 3:44 PM