Author Interview with Excerpts - The Good Dictator by Gonçalo Dias

Today, I'm excited to be featuring a new author. Meet Gonçalo J. Nunes Dias, author of The Good Dictator (The Birth of an Empire), the first book in a trilogy, originally published in Portuguese.

Gonçalo has answered a few questions and provided excerpts from his novel especially for Nadaness In Motion. 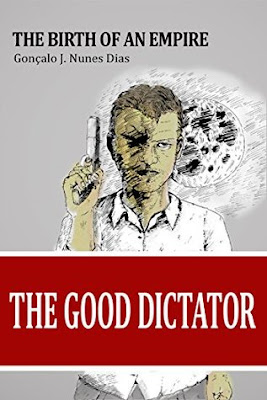 An unidentified object parked on the moon - and no one seems to know where it came from. Gustavo, a middle-aged computer programmer with a comfortable and grey life, decides to make a list of what he would need to survive a hypothetical attack. He becomes obsessed with the list, spends a fortune, robs a drugstore: his own family thinks he is going insane. After the attack, it’s the insane who are well-prepared for a new era in society. First book of a trilogy.

Note: The Good Dictator was originally written and published in Portuguese. The book is currently available in both English and Portuguese.

Nadaness In Motion: Tell us about Gustavo, the main character in The Good Dictator

Gonçalo Dias: Gustavo, the main character, is a regular person with a comfortable job, nice house, and kids. However, he is no longer in love with his wife, Marta.
“… he had not loved her for some time. He did not think about getting divorced, Marta was a good mother for his sons, they had both gotten a good home, they even had a comfortable life; he was sure that. [Were it not] for the children, he would have already filed for divorce.”
“He had committed many mistakes in his life, he had failed in many aspects, but he wanted to be a good father, and the best thing for his kids was to be close to their mother, even if this meant he had to spend the life with someone so futile like Marta.”

Gustavo is also a competitive person, even with his friends:
“Everybody turned to Gustavo waiting for a serious answer, without jokes. Everybody knew he was calculating, practical and very logical. Gustavo, in turn, was sometimes rather competitive and knew that if he exposed his theory, they would want to do the same and this could lower his percentages of survival. At this very moment, he hated himself for thinking in such a selfish and competitive way with his old friends and that he probably would not see them again.”

When the object got parked on the moon, he got obsessed with the list:
“The creation of the list had brought some adrenaline to his life, some hope in something new, in some sort of change. And now, there he was in one of his favorite places, was thinking that he had failed, that the poor emotion he had for life had led him to the exaggeration of spending too much money, putting at risk his work place, and even worse, risking his freedom after an unnecessary robbery.
While he was immersed in these thoughts, he saw his father open the old gate of the property and approach him. Gustavo sighed and thought that he would now have to hear his old father give him a moral lesson about life; accept your mistakes and don't fly into paranoia or exaggerations. That was exactly what he did not want right now, he had come to that place to be alone and now he would hear his father in a speech about common sense.”

Nadaness In Motion: What are Gustavo's strongest and weakest traits?

G.D.: Gustavo’s strongest aspect is probably his ability to quickly adapt to any new situation. He is also planner-type of person.
“Gustavo laughed again, he looked down with an amused look and saw the great hate that emanated from The Fatty.
- Do you know why it came down to this? You on your knees and me standing and observing your village in flames? Because you’re the weakest link. You know, you fatty, in the animal world, the ones who adapt the better to the environmental conditions are the ones who survive, and just between you and me, we both have the best example of it. You still think you are the GNR commander and that someone will come from the past to make me pay for my deeds, while I have quickly adapted to the new reality: as soon as the craft landed on The Moon, I made a list of indispensable things, I spent a lot of money in this list, I robbed a drugstore and was considered to be crazy by my family, but when the attack occurred, this crazy one was the one who had adapted the best to the new environment. And, let me tell you: I longed for this attack; I was fed up with living my comfortable and gray life behind a computer.”

Gustavo’s weakness is probably his inability to improvise.
“Gustavo remained quiet, feeling uncomfortable that Ramiro was better prepared than he was. He would've liked to have had a few minutes to think about some excuses, but he remained still, with no excuses, awaiting another wave of accusations and with some fear of what would come.”

Nadaness In Motion: Is The Good Dictator a dystopia or utopia?

G.D.: I think dystopian and utopian at the same time, and depends on the perspective of the reader. When the book was released in the Portuguese market, some said: it’s a post-apocalyptic novel, others a dystopian, while others claimed it was a utopian novel. Gustavo and his friends can be seen as utopian, because they try to build a better society. In one of the instances in the novel, Gustavo says:
“- I don’t do this for the power, Ramiro, I do this for our children, so that the future generation doesn't have to live in an unequal, corrupt and unprincipled society. I don’t want to be in power forever, I’m in favor of creating a law that one will only be able to be in public positions no more than eight years; after which, no privileges or special treatment are reward so that they have to go back to their work. Politics will be seen as a contribution to society and not as an opportunity to get rich and find well-paid state jobs for your friends. I do this so that your daughters and my children only hear about Swiss banks, tax havens and stock exchanges, like Wall Street, as things of a dark and greedy past from a lost society. I won’t allow you and your friends to change my view of the future.”

Connect with Gonçalo Dias via Goodreads, Twitter and his blog.

Purchase the book (in English or Portuguese) via Amazon. The English version is currently FREE for kindle and the Portuguese one is for $0.99 (as at the date of publication of this post).