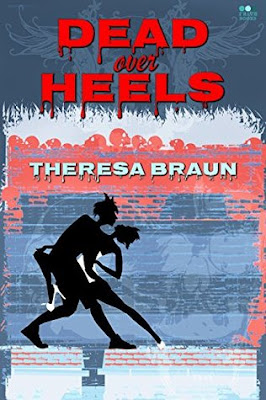 Veronica’s first date with Sebastian not only stirs up a powerful attraction, but also a series of supernatural events that will tear them apart.
After countless hours of dead end online dating, Veronica meets up with Sebastian at a reportedly haunted restaurant, since he knows she has a fascination with the paranormal. While enjoying their meals and each other’s company, they share a shocking supernatural experience. Their romantic connection is overshadowed by the ghosts of their own pasts that threaten to destroy their budding relationship. Veronica decides she must return to the restaurant to face her past and dig up more answers. Unfortunately, she realizes she must go back, this time with a reluctant Sebastian. In the end, they join forces against the evil that stands between them, but will they make it out alive?

Dead over Heels by Theresa Braun is a fast-paced paranormal short story.

The story is narrated from the first person perspective of Veronica, a woman who has spent years under the illusion that her mother left her and her father "because she didn't love them".

Veronica has spent years in search of love. She decides to make a wish on a candle then, after giving up hope, meets Sebastian via an online dating site. After they meet, the two feel as if they've known each other for a long time.

I liked how the story has a strong opening that ended with "I never knew that finding the one would be such a double-edged sword."

The two decide to meet at The Riverside Restaurant, which is rumoured to be close to a haunted area.

Veronica is cynical but entertaining. She's also quite descriptive, very down to earth and relatable.

How long does it take to read Dead over Heels? An hour tops. (An hour and a half if you're a very slow reader).

Overall, I enjoyed reading the – sad but – interesting story.

"Hey, could you send a couple of drinks to that table over there?" Sebastian shot me a wink as he spoke.
The server's mouth fell agape. "Sir, who do you mean?"
"The two over there." Sebastian motioned to the couple.
Just then, the pair released their hand-holding, got up and started toward the door. She adjusted the sweater over her shoulders. He cradled the small of her back, kissed her temple and they were gone."Sir, no one has been sitting there all night."

Note: I received a free copy of Dead over Heels by Theresa Braun via the Xpresso Tours Review Opps in exchange for an honest review.
Posted by Nada Adel at 2:06 PM