Crystal Cropper, editor of the Elmwood Gazette, has added incentive in finding out who killed Horace Q. Ogilvie, owner of the local radio station and the most reviled man in town. Horace turns up dead minutes before he is supposed to broadcast his next malicious editorial, designed to destroy yet another Elmwood luminary. Fortunately for the police department, Horace's list of future targets provides an abundant pool of suspects. Unfortunately for Crystal, her name is at the top!

"There's not a single, solitary person in this town who Horace Ogilvie hasn't ticked off, insulted, or ruined – or at least tried to."

Dead Air and Double Dares by Janis Thornton is the second book in the Elmwood Confidential Cozy Mystery series. The book opens with Elmwood local Gazette Editor-in-Chief Crystal Cropper going on a short plane trip with the local mechanic Clip Parker and nearly crash landing near the courthouse.

The pair is confronted by none other than the town's most obnoxious person, who also happens to be the owner of the local radio station, Horace Q. Ogilvie, and who fortunately for most but unfortunately for himself turns up dead with all the evidence pointing to Clip.

With so many people having so much hate for Ogilvie, Crystal has her hands full because anyone and everyone can be a suspect. And she tops the suspect list.

Although the evidence points to Clip as being the killer, particularly after his run-in with Ogilvie, Crystal doesn't believe it and rushes to clear his name. Only problem is the sheriff can't find Clip to charge him and he's not picking up his phone. 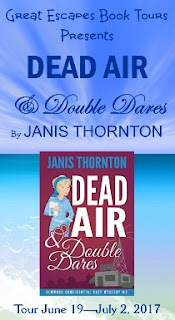 Dead Air and Double Dares has an array of fun, friendly, intelligent and interesting characters. There is Crystal, the protagonist, her informant and former housemaid for half the town, Gertie, and her friends. Gertie is definitely my favourite in the entire book, with her sarcasm and intelligence.

One of the things I liked, being a news editor myself, was Thornton's inclusion of some of Crystal Cropper's articles and editorials in the story, highlighting her journalistic style, news and criminal jargon. I loved it and learnt a lot from it too.

"Apparently, there had been no end to the man's malevolence. Would it have killed him to mind his own business? I thought not."

The characters in Dead Air and Double Dares are relatable, particularly Crystal who reminded me of a former manager, especially with her commitment to "real journalism". Despite the age difference, I connected a lot with Crystal. I loved the ever-skilled Gertie.

Janis Thornton has created a well-crafted and exciting mystery, with a wonderful cast of characters or better yet suspects. Thornton kept me interested and guessing till the end. Five stars for the finale and the results.

The language was simple and the imagery used was well-placed and fun. There was some character development for Crystal, particularly in the instances she couldn't wrap her mind around certain ideas or aspects. Still, Crystal is a well-developed character. Her interactions with her new part-time teen assistant were hilarious, especially when the assistant attempts to explain the internet to the sixty-something year-old Crystal, who hates technology.

"After living ninety-one years, Ogilvie could have died from any number of age-related health issues, all of the natural. But instead he died at the hand of a killer."

Note: I received a free copy of Dead Air and Double Dares by Janis Thornton through Lori Great Escapes Virtual Book Tour in exchange for an honest review for the blog tour. 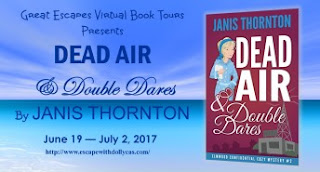 Janis Thornton is a freelance writer, personal historian, and award-winning journalist. She is the author of two local history books, Images of America: Tipton County and Images of America: Frankfort. She is a member of Sisters in Crime, the Indiana Writers Center, Association of Personal Historians, and the Midwest Writers Workshop Planning Committee. She lives in a small Indiana town not unlike Elmwood. Dust Bunnies and Dead Bodies is her debut cozy mystery.


Keep up with the rest of the Tour: