The Corpse with the Diamond Hand by Cathy Ace - Book Review 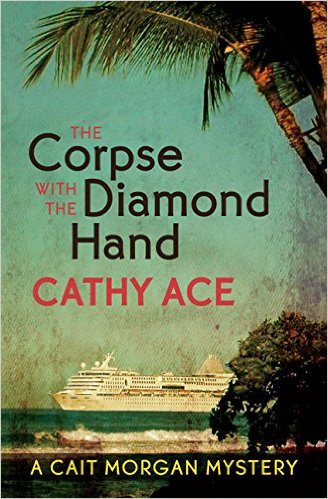 The Corpse with the Diamond Hand by Cathy Ace is a new stand-alone installment in the Cait Morgan mystery series.
Narrated from the first person perspective of Cait Morgan, the novel is a fun, mind-provoking cozy mystery.

Cait and Bud Anderson have recently said their "I do's" and are on a two-week honeymoon cruise to Hawaii, but the mystery-free getaway changes course two days before the trip is over, when Tommy Trussler, the ship's card instructor drops dead on the game floor.
To everyone on board, it appears that Tommy died of natural causes, but to the mystery-solving psychoanalyst, the man appeared to have been poisoned.

As soon as the incident occurs we are introduced to Ezra Eisen, the head of security on the ship, the nurse, doctor and other ship personal, in addition to the people who were in the ship's game room, each of whom has a secret to hide and a reason to kill Tommy, as Cait later discovers.

Cait has a special skill that has enabled her to solve crimes in the past. She literally remembers everything. However, she explains to Ezra how people perceive things, saying "As human beings, we're not capable of experiencing the world as it is – we always experience it as we are, with all our faults, flaw, preconceptions and prejudices filtering and infusing everything we perceive."

Since the novel is narrated from Cait's perspective, we get her first impressions on everything. She's quick to notice things, especially the slight tremors and changes in people's movement or behaviour. For example, a little after Tommy dies, we meet with the captain of the ship.
"But the captain's micro-expressions told me he was still feeling the weight of the suspicious death on his shoulders."

One of the lines that made me smile while reading and that is interesting for people looking to enter the mystery or crime genre was something medical, to which the Rachel, the ship's doctor said "It doesn't always happen, and it certainly doesn't happen as often as those who create fiction would have us believe, but it seems to have happened here." It is both funny and ironic.

I liked the author's use of "show don't tell" and her ability to make the reader see, smell and connect things in her book with real life. For example, when Cait says "My nostrils told me we were nearing the medical area," the reader immediately remembers the smell of anaesthesia and disinfectant.

Although there isn't character development, as is the case with most mystery novels, yet the reader comes out enlightened about several notions and ideas in life.
The Corpse with the Diamond is not free of gala dinners, elegant dresses, tasty food, that had me wishing to go on a cruise ship, and confrontations.

I enjoyed Cait's comments to herself as well as her quick assessments and body language readings of others. The novel was fairly-paced. Although it covers a period of two days, still I felt the ship's passengers were doing "a lot" in those two days.
I also liked how the author managed to make every character have a motive and I enjoyed the gathering they had where Cait drew out the perpetrator(s).

Finally, I was intrigued by the pun in the name of the book The Corpse with the Diamond, but I'll leave it at that and that it had me going in another direction.

"Experience changes us all…Sometimes it hits us like a wall, so fast we cannot fail to acknowledge it. Other times it seeps through the cracks in our daily lives until we accommodate it, almost without noticing. But it changes us all."

Other books reviewed in this series:

Originally from Wales, now-Canadian Cathy Ace writes the Cait Morgan Mysteries. Her series has found her criminal psychologist, foodie sleuth stumbling upon Corpses with a Silver Tongue, a Golden Nose, an Emerald Thumb, Platinum Hair, Sapphire Eyes and, now, a Diamond Hand during her globetrotting. The winner of The Bony Blithe Award for Best Light Mystery in 2015, when not helping Cait solve traditional, closed-circle mysteries, Cathy’s a keen gardener, ably assisted by her green-pawed chocolate Labradors.


Note: I received an Advanced Readers' Copy (ARC) of The Corpse with the Diamond in exchange for an honest review as part of a blog tour for the book via Lori's Great Escapes Virtual Book Tours.
Posted by Nada Adel at 12:30 PM