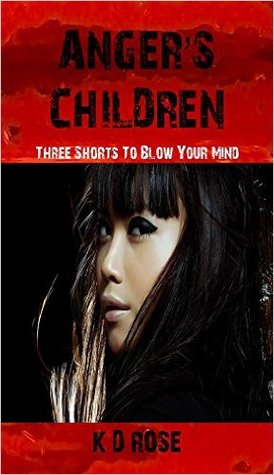 Synopsis:
Strap on your seatbelt for this whirlwind of short stories that take you out of this world—literally!
-A goddess on a mission or a young adult growing up? In the paranormal world, who’s to know?
-Covert Action is supposed to mean “secret” but in a world of regulation, just what is everyone going so far out of their way to hide? Sex is a dangerous game. More than anyone could have bet.
-What if life was as simple as a game of dice or poker? What if human’s lived their lives unaware that they were pawns, played on a board by those who were just a little more than human? Would fate intervene? Would love mean anything? If you were a God among humans, wouldn’t you be just maybe, slightly, bored?
Life ending games? Or are they just the beginning? Dangerous. Risqué. A catch. There’s always a catch. Three tales that will blow your mind. – Note: My mind was far from blown and not in a totally positive way.

Anger's Children by K. D. Rose is collection of three short stories. Judging this book or writing its review is particularly hard, since I hated one of the stories, loved another and one remained in between like and dislike.
I must note, however, that the synopses for the stories were more interesting than most of the stories themselves. Sex is the focus of the stories; some of it was more disgusting than enjoyable.

The stories are not related and can be read in any order. In the first part or story, titled "Under the Shadow of Wings", I did not enjoy the narration one bit. It felt like bits and pieces were scattered and there was no fixed timeline. Also, there was a mention of mighty sword at the beginning but it was never referred to again, which was strange. There was also a transfer of power but there was no rising tension to meet this power surge.
In addition, contradictory tones in some parts, including "She had already won. She had just come back to collect." It's like winning and collecting – we don't know what exactly, probably souls, except that they belong to her and "all her dead relatives" – are being justified.
The story quickly shifts to impossible sex in an airplane restroom, which is tiny for one person, let alone two with one of them having wings! I also found the ideas she thinks are from her dead relatives rather confusing.
"Under the Shadow of Wings" was an overall weird story and I really disliked it. It was the opening story and seriously put me off the rest of the book for a bit.

The second story titled "Eyes Only" is considerably long compared to the first and last ones and makes up the bulk of the book. It is also the most enjoyable of the three.
It is a story within a story within a story with a spectacular twist at the end, making it far more complex than the other two.
With also a lot of sex, "Eyes Only" is bursting with suspense. It boasts several bits of imagery, including: "Like a junkie, my addiction to her had galloped out of control."
"Eyes Only" was not free of confusion, however. Still it is mostly enjoyable and interesting.

The third and final story in Anger's Children is "The Dark Man"
"You remain a poignant gossamer of idealistic dreams instead of a champion of organised power – an actual force to be reckoned with." – these words echo at the end of the story as well, resulting in an unexpected and intriguing ending.
As a reader, I wanted to know who the characters were. Are they gods? Or are they pawn in a game for the gods?
Even though the characters have names, we don't know anything about them, except that they have met – and had sex – several times before and that they have been around for centuries.
I also felt the storyline and timeline were quite vague.

Overall rating: Again hard to judge but 2-2.5 stars.
Note: I received a free copy via Xpresso Book Tours in exchange for an honest review.
Posted by Nada Adel at 12:00 AM