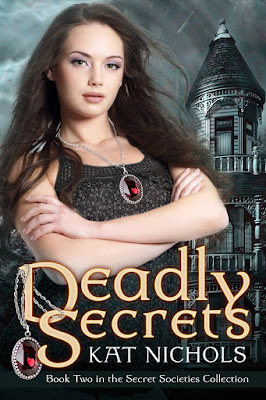 Synopsis:
Sophia Morganthal is in over her head. Her struggles with trying to run a corporation and lead her coven cause havoc in Sophia’s personal life — mostly with her boyfriend, Connor.

Amidst the chaos, a neighboring coven is attacked, pushing Sophia to assume her place on the local council. On the brink of a supernatural war, Sophia must take action as some of the coven leaders seem to have their own agenda.

Running out of options, Sophia seeks help from the last group the council wants to involve. Will the risk be worth the reward or will she lose everything she fought so hard to attain?

Add the book on Goodreads: https://www.goodreads.com/book/show/26129372-deadly-secrets?ac=1

An excerpt from Deadly Secrets

I glanced around for a doorbell, but my eye fell on a hideous door knocker instead. It looked like an angry gargoyle and some superstitious part of me didn’t want to touch it, worried that it would come to life and bite me. I slowly extended my hand to grasp it and the stone was cool to the touch. I laughed at myself before knocking on the door twice. The knocker was heavy, and the thuds echoed in the silence.
Minutes passed. The tiny hairs on the back of my neck stiffened and I whirled around, positive someone was standing behind me. But no one was. When I turned back to face the door, it was cracked open just a tiny bit. “Hello? Is anyone there?” I asked, leaning closer, trying to peek through the open door and into the hallway beyond.
Something slammed into me from behind, knocking me into the house. Arms wrapped around me, like steel bands and I opened my mouth to scream. One of the arms snaked up to cover my mouth, the fingers icy cold on my face, bruising my jaw. I struggled and kicked at my attacker, trying to free my hand to cast a spell and he laughed. “You picked the wrong house, human.”
I tried to scream that I wasn’t human, to plead for my life, but no words made it past my lips. His arm tightened around my chest, constricting my lungs, and my vision started to go gray. His head moved to my neck and I squeezed my eyes shut. Was this how it was going to end?
“Michael! What the hell is wrong with you?”
The sound came from far away and as my attacker jerked, a piercing pain sliced my neck. My eyes flew open. The smell of my blood filled the air and he growled at the woman as she approached, defending his prize. I froze, not wanting to make any sudden moves, so scared I thought I might vomit.
She held her hands up as she walked closer, but her fangs were out, the smell of my blood making her hungry too. “Damn it, Michael. She’s not human. She’s a witch.”

I hope you liked the book because it's GIVEAWAY TIME!
As part of the book blitz and courtesy of the author, there is a giveaway for ONE ebook copy of Deadly Secrets. Open internationally. The winner will receive their copy after 8 November.

A quick Q&A with Kat Nichols

What is the Secret Societies Collection about?
KN: The Secret Societies Collection is a planned series of books about how various supernatural groups interact with humans and each other in northwestern Illinois. Since the series covers multiple groups, each story is divided into two books or a Set. The first two books, Family Secrets and Deadly Secrets, are the Secrets Set and tell Sophia's story. Book three will move on to a new group and therefore will start a new Set. Each set can be read on its own, but the characters’ lives will intertwine with those from other sets, so you can catch up with old favorites or fall in love with new ones.

Q: What are you currently working on?
KN: I currently have several projects going. The first is a short story that will be released to my newsletter followers about Sophia, the main character in the first two books of the Secret Societies Collection, and her first Christmas in Illinois. I’m also working on the third book in the collection, which focuses on a new paranormal group, the Fae. It tells the story of Morgan, who is 16 and completely oblivious to everything supernatural. Finally, I’m working on a New Adult Contemporary about Brynna, a senior in college, who is hiding from almost everyone, including her new love interest, that her father is a convicted serial killer. It’s different from the other things I’ve written, but it’s been fun so far.


Purchase the book via Amazon and Barnes & Noble.

Also, check out my five-star review of Family Secrets, the first instalment in The Secret Societies Collection by Kat Nichols. 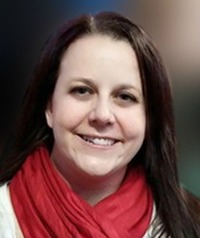 Kat Nichols was born and raised in the suburbs of Chicago. The youngest of four children, she'd been known to play for hours with only a cardboard box for entertainment. Her imaginary friends had friends... and family... and even little cities to play in. As she grew older, she began to put some of these stories down on paper, rather than keeping them in her head.
Writing a novel had always been a dream for her, perhaps an item on her bucket list, but it wasn't until she joined a writing group with other aspiring writers that she finally got to work.When not writing, Kat is reading or driving her son to and from practices and wishing she was reading.It depends on the day.
Kat still lives in the suburbs of Chicago with her wonderful husband, their hilarious son and their sometimes adorable and sometimes annoying cat.