The Secret of the Lost Pharaoh by Carolyn Arnold - Book Review


"The fate of the world could be at stake."
"Not to make too dramatic a statement, but yes, it could be." 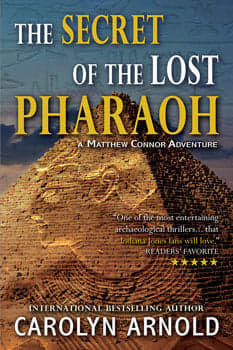 The Secret of the Lost Pharaoh by Carolyn Arnold is the second standalone instalment in the Matthew Conner Adventure series.

Archaeologist and adventurer Matthew Connor receives a phone call from friend and former lover, Alex, to join her on what could be the discovery of a lifetime in Egypt. Alex says that she may have uncovered a pharaoh's tomb AND the famed mythical Emerald Tablets.

Anyone who gets hold of the Emerald Tablets will acquire the secrets of the universe along with major wealth and power, so the myth goes. However, if they fall into the wrong hands, well the world as we know it would be in great peril.

Thrill-seeker Matthew Conner, who is renowned for uncovering or rather debunking historical myths, travels to Egypt with his friends Robyn and Cal. There they meet Alex and her team, who have discovered a possible map that should lead them to the lost pharaoh's tomb and the tablets.

"The perspiration on [Robyn's] brow nearly chilled into a sheet of ice. She had a bad feeling about this, but if she let her body go still to inspect what was going on, her panic would cause her to sink." 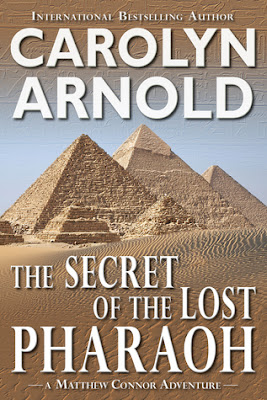 One of the things I loved about The Secret of the Lost Pharaoh is that Arnold does not depict Egyptians as backward people on camels as most "Mummy" and Hollywood movies do. The book is set in modern day Egypt, after 2011.

Although the prologue is the first step of the discovery of what could be the lost pharaoh, the actual visit does not take place until a few chapters later.

"The terrain was sand, but it wasn't without its beauty. The sunlight refracted off the surface, making it look like a sea of diamonds."

The Secret of the Lost Pharaoh is rich in characters, good, evil, and in-between. One of those memorable and sometimes humourous in a matter-of-fact way was Jasper, the one they called The Snake Whisperer because of his ability to deal with snakes. He could also decipher hieroglyphics.

A big chunk of the book handles character relationships, including the aftermaths of the events that took place in book 1, The City of Gold, and how it affected the group, straining certain emotions and making for added tension. Cal is the most impacted by the previous adventure as his fiancé was kidnapped – and nearly raped – and their lives were on the line. Having said that, I must stress that The Secret of the Lost Pharaoh can be read as a standalone. I hadn't read book 1 and didn't feel I was lost at any point while reading.

There is a lot of introspection, especially as Cal struggles with the opportunity to join Matthew on his adventure to Egypt, while at the same time maintain his relationship with his fiancé.

"If he went away with Matthew, he could probably kiss Sophie's smile goodbye. But was he truly prepared to give up these adventures altogether?"

We also get a lot about the Robyn-Matthew relationship and as the novel progresses the Matthew-Alex relationship.

In addition, to the strained emotions between Cal and his fiancé, and Robyn struggling with the Alex-and-Matthew connection, anger surfaces between Alex and her team. So there is a lot of emotional play throughout the book. 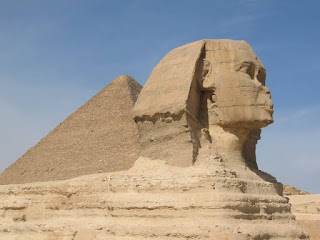 Although narrated in the third person, there are several points of view in the novel, but it is clear who is thinking: Robyn, Matthew, Cal, or Alex. Each view point comes with its emotions and highlights certain ideas and aspects of the adventure.

Character development is evident for the main characters, and I can guess that as the series progresses, they will continue to grow and learn more about themselves.

I like how Carolyn Arnold sneaks in humor whenever possible. Cal is fairly superstitious and is hilarious to say the least; he's also very down-to-earth and makes for great relief, despite his internal struggle, during the course of the novel.

"The wall says our pharaoh was assassinated and his name was stripped from him. It goes on to say that his spirit would be at unrest for eternity."

As an Egyptian, I'm proud to say that The Secret of the Lost Pharaoh is a well-written must-read centred around my country, which is depicted in a positive way. The book kept me on edge all the way.

Overall, The Secret of the Lost Pharaoh is an action-packed exciting adventure set in modern day Egypt with lots of history, laughs, and a mystery or two.

Nadaness In Motion has reviewed other books by Carolyn Arnold from the McKinley Mystery series. Check out Coffee Is Murder (with an excerpt), Halloween Is Murder and Money Is Murder.

As for Arnold's psychological thriller books, check out On the Count of Three (Book 7 in the Brandon Fischer series), Past Deeds, and What We Bury (Book 10 in The Detective Madison Knight Mystery Series)

Note: I received an Advanced Reader's Copy of The Secret of the Lost Pharaoh by Carolyn Arnold in exchange for an honest review. 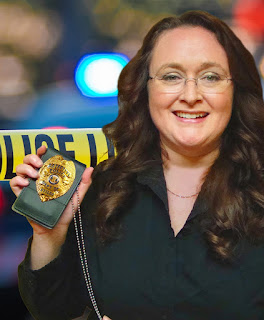