Sherlock Holmes and the Case of the Disappearing Diva - Book Review 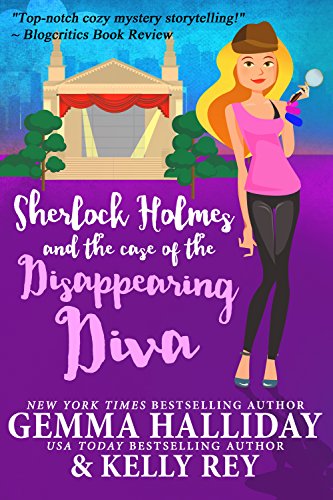 From #1 Kindle and New York Times bestselling author Gemma Halliday and USA Today bestselling author Kelly Rey comes a story about Sherlock Holmes, two savvy female detectives, and one chance to catch a killer and the hot Dr. Watson at the same time…

If there's one thing Martha "Marty" Hudson can't say no to, it's her best friend Irene Adler. So when Irene's little white lie about a fake detective named Sherlock Holmes turns into a real case from an actual paying client, Marty is all in. But their simple missing person case takes a deadly turn when the missing "person" ends up being a missing corpse.

Rebecca Lowery was an opera singer in life and, according to her sister, who hires the famous detective to find her, a diva with capital D. When her body goes missing after a supposedly accidental fall, Marty & Irene can think of several people who might want the diva to disappear permanently—especially if her missing body is actually hiding evidence of her murder. Is it the boyfriend with a temper and a shady record, the jealous understudy who's now stealing the show, the creepy undertaker with possible ties to the underworld, or the estranged sister herself who now inherits everything?

Marty and Irene aim to find out, even while trying to keep cool around the hot ME, Dr. Watson, and dodging questions from the Irregulars blogger, Wiggins, about the mysterious man behind the name Sherlock Holmes. Will the ladies be able to pull this one off? Or are they in over their heads…and possibly about to take their own final bows?

BOOK REVIEW BY NADANESS IN MOTION
Sherlock Holmes and the Case of the Disappearing Diva by Gemma Halliday and Kelly Rey is an exciting, fast-paced, highly enjoyable cozy mystery. I loved every bit of it.

The book has all the aspects Sir Arthur Conan Doyle's Sherlock Holmes is popular for – but differently. Holmes "hardly a celebrity. Especially considering he didn't actually exist" is how the book begins. The address for the now popular but elusive detective is in Baker Street, while Irene Adler is the narrator's best friend and main accomplice in creating the detective façade. Let's not forget Dr. Watson. ;)

Martha "Marty" Hudson and Irene Adler are confronted with a strange case of a missing corpse. A Barbara Lowery claims that upon coming to the local mortuary, she discovers that the woman they were to bury is not her sister, Rebecca, a play singer.

Marty and Irene begin to search for clues leading up to the "disappearing diva" and as they trudge in the investigation, they discover that Rebecca was more than disliked by a few people. Several with motives to take her out of the spotlight.

"So what about Rebecca did someone not want seen?"

The novel is narrated from Marty's first person perspective, showing Marty's constant fear of getting their fake "Sherlock Holmes" business discovered by the police. She is down to earth, and while it would be normal for her millionaire best friend to take the spotlight, I liked that the authors made Marty the narrator. She's also funny and smart and I particularly liked how she began following the clues that made up Rebecca's life prior to her death.

"He pushed up his sleeves, the better to intimidate us with his Popeye forearms."

One of the things I loved about Sherlock Holmes and the Case of the Disappearing Diva is the use of "show don't tell" and the humour. The book is simply hilarious! Both Marty and Irene are cynical and the encounters and people they face make for great laughs.

We also get a bit of romance as Marty crushes over Dr. Watson, whose appearances though few are important. The reader can't help but hope for a happy ending for the may-be-couple.

Sherlock Holmes and the Case of the Disappearing Diva is five-star must-read by all levels. It's pace is fast and as the duo run around trying to solve the mystery and get paid – because Marty's inherited house is falling apart – the reader can't help but keep reading to find out who "misplaced" Rebecca and why.

Note: I received a free copy of Sherlock Holmes and the Case of the Disappearing Diva in exchange for an honest review as part of the blog tour.


Add the book on Goodreads. 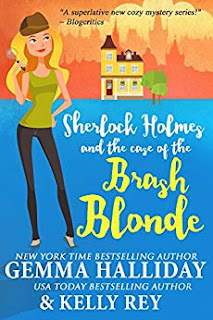 Keep up with the rest of the blog tour via Lori Great Escapes including author interviews, guest posts, and more reviews.

Gemma Halliday is the New York Times, USA Today & #1 Kindle bestselling author of the High Heels Mysteries, the Hollywood Headlines Mysteries, the Jamie Bond Mysteries, the Tahoe Tessie Mysteries, the Marty Hudson Mysteries, and several other works.
Gemma's books have received numerous awards, including a Golden Heart, two National Reader's Choice awards, a RONE award, and three RITA nominations. She currently lives in the San Francisco Bay Area with her boyfriend, Jackson Stein, who writes vampire thrillers, and their four children, who are adorably distracting on a daily basis.

Connect with Gemma Halliday via her Website and Facebook page.
Purchase Links: Amazon B & N iBooks Kobo Smashwords
Posted by Nada Adel at 1:19 AM