Have you ever held onto a secret you've been dying to share, and then finally...you can?

For the last few weeks I've been helping Angela and Becca at Writers Helping Writers keep a BIG secret...what the next book in their thesaurus series will be.

It might seem strange to not tell one's readers what book you're planning to release...unless you happen to write books on Show, Don't Tell like Angela and Becca do! They couldn't resist the opportunity to show, not tell, by waiting for the cover reveal. They even created a *REDACTED* cover for it, which you might have seen floating around.

The next book in the descriptive thesaurus series is The Emotion Thesaurus Second Edition!

It's been 7 years since the original Emotion Thesaurus hit the shelves. Many writers have credited this unusual book with transforming their writing. This guide is packed with helpful lists of body language, thoughts, and visceral sensations for 75 different emotions, which makes it easier for writers to convey what characters feel.

Since 2012, many have asked the authors if they would add more emotions, so that's what Angela and Becca have done. This new edition has added 55 more emotions, bringing the total to 130.


There are other new additions to the book and in fact, it's almost doubled in size! I recommend checking out the full list of emotions (and some sample entries) HERE.

Here's a bonus tip from the new book, which has not been released yet BUT it up for pre-order (links below) 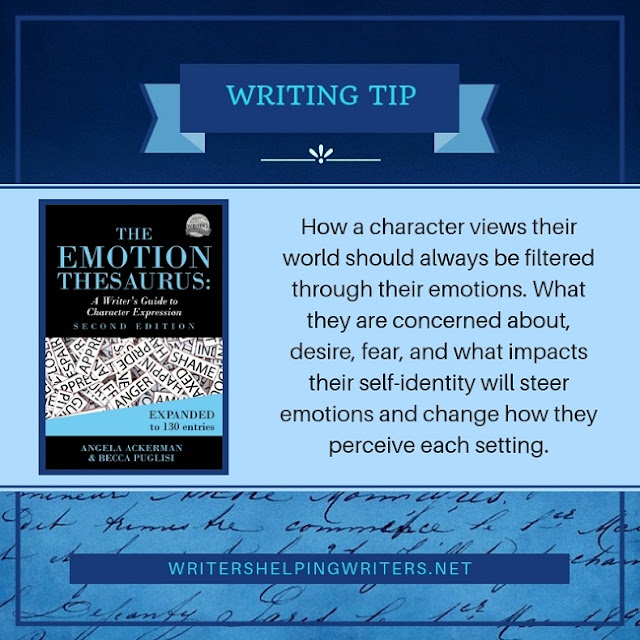 And more good news: this book is available for pre-order! You can find it on Amazon, Kobo, iBooks.and IndieBound.

Angela and Becca are giving away a FREE webinar recording of one of their popular workshops on Emotion. So, head over if this is an area of struggle for you. It might really help!

Last but certainly not least, it gives me great pleasure to tell you that I've received an Advanced Reader's Copy AND I'll be providing a book review of THE EMOTION THESAURUS Second Edition in February.

You can also check Nadaness In Motion's book review of THE NEGATIVE TRAIT THESAURUS by Angela Ackerman and Becca Pugilisi.