Today, I'm featuring an interesting kind of book and novel. I want to introduce you to Journeys through Faladon: The Titan Divide. I won't go into detail but will leave you with a short introduction and guest post by the publisher ForgeFiction and an excerpt from the novel, which was published on 29 July 2020. 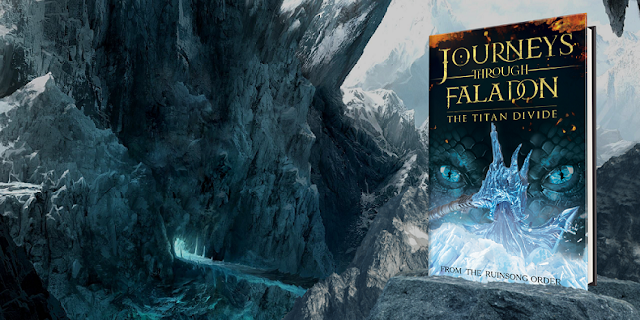 Writing is often thought of as a lonely activity, a singular person sitting behind a typewriter, paper and pen, MacBook, or what have you.

But one book has set out on a mission to change that. Journeys through Faladon: The Titan Divide is an epic fantasy novel created by over 40 people.

It tells the story of Ürbon, treasure-hungry raider of the western seas, who unwittingly finds himself chosen as champion by Bjarl, the rune axe of legend. Stepping forth on a quest he never asked for is Ürbon truly the one to vanquish the approaching darkness? Or could the legendary axe be mistaken, dooming Faladon to its fated destruction.

Uniting together to collaborate on this book, the creators of Journeys through Faladon: The Titan Divide together form the Ruinsong Order. The first novel in a trilogy is available on Faladon.com and Amazon. 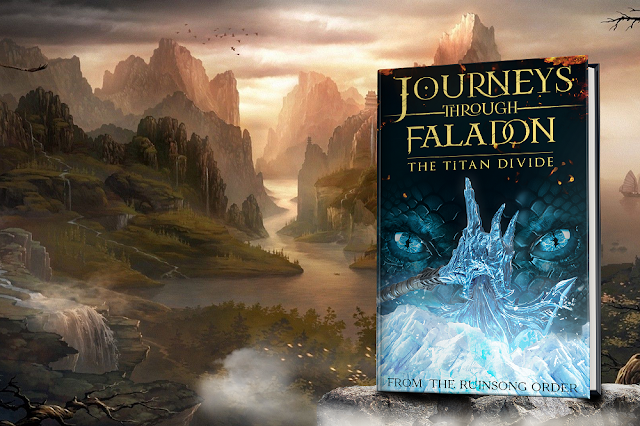 Excerpt from Journeys through Faladon: The Titan Divide

As Ürbon reached the middle, he found the mysterious object to be a block of ice. How did a block of ice come to be in the heart of a volcano? And how did it not simply melt on the spot? Ürbon could not know. He gazed in wonder at the mysterious thing, marveling at how it kept its form despite the heat. What also gained his attention was a handle sticking out of the block. Upon further inspection, he noticed the transparency of the ice and a curious shape within. He thought he could see a large horned head and rows of teeth bared at him. The edges and hairline cracks of the icy container amplified a certain power.

Ürbon did not know why he grasped the protruding hilt. It could easily have been either an act of fate or simply the enactment of childish fantasy; the hilt being the arm of a blade of yore, and he, Ürbon, the legendary hero to lay claim to the fable.

But no amount of fable or legend could have prepared him for this.

As his hands gripped the leather, a white flash engulfed his vision. He tightened his grip to keep himself steady. An ear-splitting crack rang through his ears, the white flash growing stronger. He closed his eyes to escape the blinding light, but it was no use. He felt himself engulfed by it, lost in its freezing glare. He shuddered from the icy light, and, for the first time, Ürbon felt fear, gut-wrenching, heart-stopping fear.

The flash dissipated as suddenly as it began, and Ürbon opened his eyes, still dazed from the blinding light, to find himself in darkness once more. The icy blue glow was also gone, and where once was a block of ice now was an empty space. Yet he still held the hilt in his hand, free of its icy lock.

What was now in his hands was an axe of ice and steel, the haft wrapped in soft leather. He recognized the steel of the axe’s pole. It was a metal used by Jödmun craftsmen, a formula of steel and a rock substrate, creating a virtually indestructible material. What was more impressive, however, was the ice sculpted atop the pole, a visage of a wyrm, whereas the wyrm’s fiery breath was of steel, forming the blade.

Ürbon knew this axe but could not believe it to be in his hands. There was only one such weapon in existence. Bjarl, the rune axe of legend, crafted by the greatest blacksmith of the Jödmun, Volstagg the Mad Smith himself.

He looked at the axe in awe. He could not avert his gaze, its wonder and beauty captivating him. This was a true legend within his grasp. How it ever came to be here, so far from home, he could not fathom.

His eyes barely tore away from the legendary weapon as a scorching fire erupted in the darkness. Ürbon saw red and orange flames, coiling and twirling around a great horned head. It rose amidst a rumble of rocks. Two blazing eyes glared at him as its mouth opened in a snarl, the flames burning ever stronger. Sharp black scales peeked out from behind tendrils of flame which flowed out from a large jaw lined with pearlescent teeth.

As if one legend within this cavern was not enough, Ürbon held back a gasp as yet another rose from the darkness. Any Jödmun would know well what creature this was, for only one could breathe flame, and they were revered as the most terrifying yet majestic of all. It's cold-blue eyes stared as Ürbon stood his ground, holding Bjarl firmly in his grip. Fear would only inflame a full-grown dragon.

Purchase Journeys Through Faladon: The Titan Divide via Amazon.