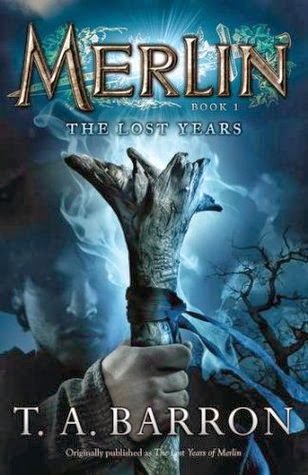 Merlin: The Lost Years is the first installment in the Merlin Saga by T. A. Barron. The prologue is written in the third person, while the rest of the novel is narrated in the first person by a 12-year-old Merlin, or as he is called throughout the novel, Emrys.

The opening lines of the story remind the reader of the popular scene when an arm rises from the water holding Excalibur.

Emrys washes up on a shore, alone at first, and has no memory of who he is and how or why he got to this place. He notices a beautiful woman also washed up on the shore and wonders if she could be his mother but feels she is too beautiful to be so. They are attacked by a wild boar and saved by a stag.
This, slightly strange, beginning is explained after a few chapters.

Emrys is not convinced that this is his real name and is unsure if the woman, Branwen, is his mother. Throughout the novel, he tries to find out who is he is, who is parents are and where he belongs.

Emrys has powers but when he uses them, they result in more destruction than intended and he learns to fear them. Throughout the novel, Emrys considers using his powers several times but remembers the promise he made to Branwen to never use them in addition to the painful memory where he loses his eyesight.

Despite being narrated in the first person, the novel moves at a fairly quick pace. Though the parts about Emrys remembering the painful memory of using his powers are frequent and feel repetitive “the smell of burning flesh...” is repeated several times.
The idea of the “lost years” is resolved in the end, where Emrys, and the reader, come upon some startling revelations.

I liked Barron’s use of the giants and how size does not matter. Shim is adorable, especially in the way he speaks “but I is!”, “certainly definitely absolutely” and “very very very scared” just to name a few instances. The first meeting with Shim is beyond enjoyable.

Merlin: The Lost Years is a journey of self-discovery and is a good start to the world of young Merlin (Emrys). And I look forward to reading the second part of the saga, titled The Seven Songs.