Today, I'm touring Fatal Façade by Wendy Tyson and Lori Great Escapes Virtual Book Tours.
For my stop, I'm featuring an exclusive interview with author Wendy Tyson. Be sure to check out the giveaway as well. 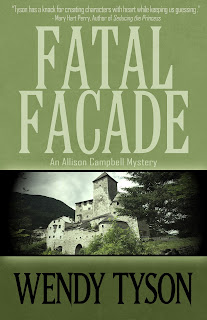 Allison Campbell accepted a dream assignment: a visit to the Italian Dolomites to help Hollywood socialite Elle Rose reinvent herself. A guest cottage on the grounds of Elle’s historic castle promises to be a much-needed respite from Allison’s harried life on the Philadelphia Main Line, and the picturesque region, with its sharp peaks, rolling pastures, and medieval churches, is the perfect spot from which to plan her upcoming wedding.

Only this idyllic retreat is anything but peaceful. There are the other visitors—an entourage of back-biting expats and Hollywood VIPs. There’s Elle’s famous rock star father, now a shadowy recluse hovering behind the castle’s closed doors. And then there’s Elle’s erratic behavior. Nothing is as it seems. After a guest plummets to her death from a cliff on the castle grounds, Allison’s trip of a lifetime turns nightmarish—but before she can journey home, Allison must catch a killer.

Nadaness In Motion's Exclusive Interview as part of the blog tour

Nadaness In Motion: If you could time travel, which era (and country) would you go to?
Wendy Tyson: Ancient Greece. I’m cognizant of the fact that women didn’t fare so well during many eras and in many countries, including Ancient Greece. They were often viewed as the property of their husbands or fathers and had few rights and little recourse under the law. But to time travel for a visit only? That would be fascinating.

Nadaness In Motion: Who are your favourite – and least favourite – classical authors?
Wendy Tyson: Some of my favorites include Charlotte Bronte, Dickens, Victor Hugo, Jane Austen, Hemmingway, and Dostoyevsky.
Least favorite? Probably James Joyce. I’ve really tried, but his work never captured me.

Nadaness In Motion: Which countries are on your bucket list?
Wendy Tyson: I love to travel and I have a very long bucket list. A few from the top of that list are Argentina and Chile (specifically Patagonia), Norway, and Iceland. I’d also like to visit Easter Island.

Nadaness In Motion: What is the hardest thing about writing a mystery novel?
Wendy Tyson: Rewriting a mystery novel. I love writing that first draft—all the freedom, all that white space. While editing is critical, I find the rewrites harder, especially the third or fourth rewrite, when you’re really fine tuning language and making sure every word advances the story.

Nadaness In Motion: How many books can you work on at the same time? Don't you worry about mixing bits and pieces when working on more than one book?
Wendy Tyson: I’m currently working on three books—two first drafts and a line edit of another.  I don’t really worry about mixing bits and pieces. I work on each book separately. That is, when I’m focusing on one book, that’s all I do, and I usually don’t work on two books during the same day (unless it’s editing). Plus, the characters for each book are very different from one another as are the settings, tone, etc. It’s rather like having different groups of friends. You don’t mix them up. Nadaness In Motion: What is the first thing you pick when you decide to write a new mystery? (Place, character to die, book name…?)
Wendy Tyson: Title. Although the title may change eventually, having a great title helps me to define the storyline, consider themes, and flesh out the characters. I like having that word or phrase to root the novel.

Nadaness In Motion: If you could pick one of your books to become a movie or a series, which would it be?
Wendy Tyson: I think the Greenhouse Mystery Series would make a terrific Hallmark Channel movie or television series!

Nadaness In Motion: What has impacted your writing the most?
Wendy Tyson: Two things have impacted my writing the most: my upbringing and my career history.
I come from a family of strong women. My great-grandmother came to this country from Italy as a teen. She had an arranged marriage to an older man, little education, and struggled with English. Nevertheless, she learned the language and the culture and eventually became a successful businesswoman while raising her kids, investing in real estate and flipping properties before it was trendy. I’ve been blessed to experience that kind of grit in many of the women in my family. Their strength fuels my characters.
My career history has also impacted my writing. As a young woman I was a horse farm worker and a veterinary assistant. Later I attended graduate school for counseling psychology and was a therapist, then went to law school. All of these career paths have influenced my characters and my books, but my psych background has probably been the most impactful. I was only in my twenties when I was working with troubled teens and their families. Those kids—their vulnerability, their resilience—have stayed with me and inspired not only the Allison Campbell series but characters and themes in other novels.

Nadaness In Motion: Tell us a bit about Allison Campbell, the protagonist of your mystery series.
Wendy Tyson: Allison Campbell is Philadelphia’s premier image consultant. A dissertation shy of a PhD in psychology, she spends her days helping others reinvent themselves, but her biggest transformation was her own.
Allison had a troubled childhood. Determined to overcome an abusive family life, she decided to become a psychologist. While in graduate school, she grew close to a teenage patient who ran away and was presumed dead. Allison blamed herself. Eventually Allison moved to the Philadelphia Main Line and reinvented herself as an image consultant. She’s able to use her understanding of human nature and her own experiences as an outsider to assist others (and solve crimes), but no matter how successful she becomes, the mistakes of her past haunt her.

Nadaness In Motion: How many parts are you planning for the Allison Campbell Mystery Series?


Wendy Tyson: Fatal Façade is the fourth installment in the series. Right now, I have a contract for six books.

Don't forget to enter the giveaway – open internationally as part of the tour!

Keep up with the rest of the tour: 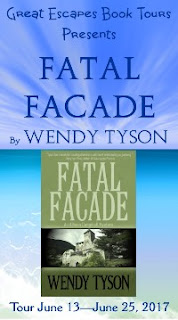 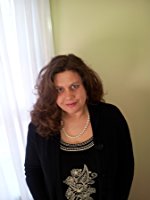 Wendy Tyson’s background in law and psychology has provided inspiration for her mysteries and thrillers. Originally from the Philadelphia area, Wendy has returned to her roots and lives there again on a micro-farm with her husband, three sons and three dogs. Wendy’s short fiction has appeared in literary journals, and she’s a contributing editor and columnist for The Big Thrill and The Thrill Begins, International Thriller Writers’ online magazines. Wendy is the author of the Allison Campbell Mystery Series

and the Greenhouse Mystery Series