When I first picked up Giles Morgan’s The Holy Grail, it was on sale at a local bookstore - @DiwanBookStore – otherwise it would have been too expensive. I’m glad it was on sale because it’s a real treasure. 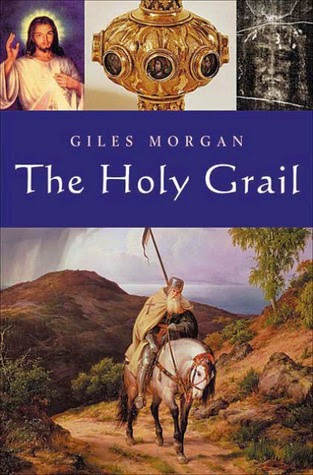 Overall the book is divided into eight chapters. Each chapter is subdivided into shorter parts. It is easy and interesting to read, especially since it intertwines history and literature. Although it does not have any complete stories, The Holy Grail encompasses many smaller and shorter stories within the folds of its pages. The reader is often reluctant to turn the page for fear of forgetting the beauty of the page before it.

The first three chapters are titled: “The Magic Vessel”, “The Cup of Christ” and “Glatsonbury and the Grail”. The first chapter handles the Grail as an idea or a magic vessel; it discusses how various cultures have objects similar to the Grail. For instance, in Celtic mythology, they had, instead of the chalice cup, a magic cauldron. The book also traces the Holy Grail in literature across time, particularly with regards to King Arthur and his knights, who were often, if not always, associated with a quest to seek out or retrieve the Holy Grail. Morgan explores the Grail in relation to Christ and Joseph of Arimathea, who as Morgan explains “plays a key role in the medieval Grail stories, and other than Christ, he is a biblical character mostly associated with [the Grail]. However, like the Grail itself, there remains something mysterious about his identity and his relationship to the chalice cup,” (p. 57-8). Morgan then discusses the various scenarios by which Joseph of Arimathea could have obtained the Grail.

Following that is an entire chapter, excluding other references throughout the book, dedicated to “Arthur and the Holy Grail”. This fourth chapter is followed by another called “The Grail Mysteries”, which explores the Templars, the Cathars and The Turin Shroud, and other religious groups and ideas often associated with the Grail.

The three remaining chapters in the book are titled: “The Grail Revival”, “A Modern Obsession” and “The Cinema of the Grail”.  The first of these three explores a literary revival in Grail-related tales in the eighteenth and nineteenth centuries through prominent writers such as William Blake and Alfred Lord Tennyson. Morgan reveals that the idea of the Grail “belongs outside the orthodox teachings of the Church” (p. 105). Puritans and Catholic Church reformers rejected Grail literature at the time.

The following chapter “A Modern Obsession” handles the Grail through the works of T. S. Eliot, Carl Jung, T. H. White and J. R. R. Tolkien. Morgan claims that “there are undeniable parallels” between Tolkien’s epic trilogy The Lord of the Rings and the Arthurian romances, for both involve the theme of the quest. “Like the Grail romances the quest which is undertaken is perilous and difficult and can only be achieved by one special individual” (p. 131). However, there is a major difference between the Grail and the One Ring. The former has healing powers and is a “heavenly talisman”, whereas the One Ring is evil and corrupts whoever possesses it. Morgan also claims that the Arthurian influence is apparent in the titles of two of Tolkien’s three books, namely the last two. “The Fellowship of the Ring echoes the fellowship of the Round Table and The Return of the King evokes the legend of Arthur’s promised return.” (p. 131). Morgan also compares Aragon to King Arthur and the wizard Gandalf to the Arthurian wizard Merlin.

Giles Morgan also elaborates on the works of author T. H. White, who published a series of books on King Arthur and Camelot between 1939 and 1977. The series begins with The Sword in the Stone, followed by The Witch in the Wood, then The Ill-Made Knight, Candle in the Wind and finally The Book of Merlyn, which was published posthumously.

Finally, the last chapter in Giles Morgan’s The Holy Grail is “The Cinema of the Grail”, which encompasses the representations of the Grail in films by, to name a few, George Lucas in his epic fantasy series Star Wars, Steven Spielberg – alongside George Lucas – in Indiana Jones and the Last Crusade, Monty Python in Monty Python and the Holy Grail and finally in Peter Jackson’s recent adaptation of J. R. R. Tolkien’s The Lord of the Rings trilogy.

There is no doubt that Giles Morgan knows how to present his work and keep his readers interested. The entire book is 155 pages long divided into short chapters, which are sub-divided into shorter topics or ideas. The language isn’t too difficult, though it might be a bit for people who are unfamiliar with Christian terminology. Naturally, there are many references to literature since the Arthurian legends are often associated with the Holy Grail; accordingly, the reader is interested in exploring all of these references to see how each writer draws on the legendary Arthurian romances. Moreover, Morgan’s weaving of words appears to come naturally but has a lasting effect on his readers.

I have finished this book not more than three months ago and I am already eager to reread it as well as other books by Morgan.

The Holy Grail by Giles Morgan is one of those books that you cannot put down and the moment you finish it, you feel like you want to start it all over again. It is, by all accounts, a must-read.