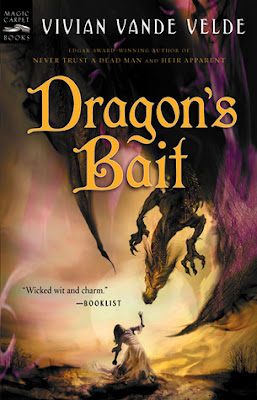 The story revolves around Alys, a fifteen-year-old girl, accused of practicing witchcraft. She is unjustly tried in a farce of a trial and the villagers, along with a ruthless inquisitor, decide to punish her by presenting her as a sacrifice to a dragon.

Alys succeeds in writhing herself free of the binding ropes after the villagers leave her tied to a stake outside their town for the dragon to eat. She begins to welcome death for she has nowhere to go.

When the dragon shows up, events take an interesting turn for the dragon does not seem interested in eating her; it wouldn’t have landed near her if she hadn’t intentionally thrown a rock at it.

In Alys’s first encounter with the dragon, she remembers the stories recounted in ballads and is surprised that the dragon acts differently. I like how Vivian Vande Velde used those stories that people often refer to as matter-of-fact and opposed them.

The dragon decides to assist Alys in taking revenge on those who unjustly tried her, found her guilty and turned her world upside down.

Until almost the end of the novella, I, the reader, like the dragon a lot more than Alys, the protagonist of the story. She is paranoid to the point of irritation. The dragon, on the other hand, is mysterious, does not express emotions much and is often smarter; too quiet for Alys’s taste and needs perhaps. The reader, myself at least, only begins to like Alys when she starts taking matters into her own hands and becomes will to risk her life for others.

In the final chapters of the story, we see Alys mature, as compared to the beginning; she is willing to make sacrifices and sees the cons of seeking revenge. She considers the idea of the ‘soul’ and nearly dies in an attempt to make things right.

The story ends on a happy note.

I’m wavering between giving Dragon’s Bait three-and-a-half and four stars. It is an interesting story that distinguishes itself from the damsel in distress cliché.
Posted by Nada Adel at 6:07 PM