She Carries the World - Flash fiction

"It is said that Atlas carried the world on his shoulders as punishment for going against the gods," Sarah said during her English presentation. "While others claim that he carried only the heavens or the sky," she continued pointing upwards.

"People can argue all they like. But what I am sure of is that mother earth held and continues to hold the earth till today," she said her voice rising with pride.

"And can you prove that, oh wise one?" Mocked Ed from one of the backseats in the classroom.

"Actually, I can." Sarah answered confidently, shutting him up. "But I will have to extend my presentation to beyond the classroom."

"I wasn't joking about the evidence. I can show you after school today."

The teacher had no idea what she was talking about but – under unchallenged persistence - agreed to do a quick field-trip with the rest.

After classes ended, Sarah invited her classmates, all of whom had continued to talk in hushed whispers about her strange request and possibly weirder presentation.

"It's a bit of a walk since we don't have a school bus, nothing you can't handle though," she informed her classmates, directing them towards the edge of a nearby forest.

"We're going into the forest?" Ed questioned, his tone uncertain.

"Yup!" Sarah answered confidently and led the way. "You can turn back if you want but you won't see what I have to show you," she said over her shoulder.

Not wanting to be doubted over his manhood or be called a 'scaredy-cat', Ed followed along with Mr. Oakman and the rest of the class.

"How much farther?" Whined one of the girls a few minutes later.

"Not much. We're almost there," answered Sarah.

Sarah turned sharply at him and responded "We are not lost. And if you're scared you should go back, in which case, you will get lost. Now stop trying to create panic."

"Yes, you are and yes that's what you do when you're not in charge," she snapped at him, her eyes almost glowing with anger.

"We're almost there. I promise," she called aloud to the others trailing behind.
As promised, they reached a clearing. Huffing and puffing, most of the students bent over, their hands on their knees to rest, even those from the football team.

Clearly not as athletic as they claim to be, Sarah thought.

"Well?" said Ed, panting and not looking up.

"You need to look up," Sarah answered, her voice filled with excitement.

Before them stood a large waterfall.

"Look closely behind the water," she instructed.

Mr. Oakman followed her gaze, accompanied by several other students. Gasps followed as they began to see what she meant.

Behind the falling water were patches of pink, blue, green and red, hanging on top of finger-line mountain ridges.

Above that they saw houses seated at the top of another ridge. In the centre of the ridge was an opening, marking the source of the waterfall.

"A hand carrying the houses, and the water coming from its centre or heart," continued the teacher.

Sarah smiled proudly and mouthed "I told you so" to no one in particular. 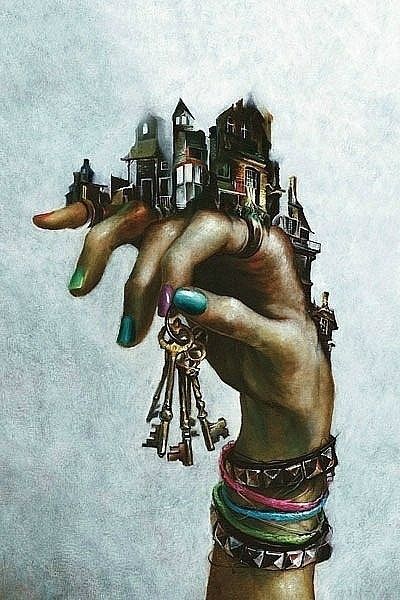