Twice Upon a Time - Book Review

Twice Upon a Time by Hope Irving is the first instalment in the Black Angel Book series. It is the story of the witch Deidre, who, being in love with the calligrapher monk Morgann, casts a spell to reunite their souls in the future. However, while Morgann's hosts remember everything, Deidre's do not. 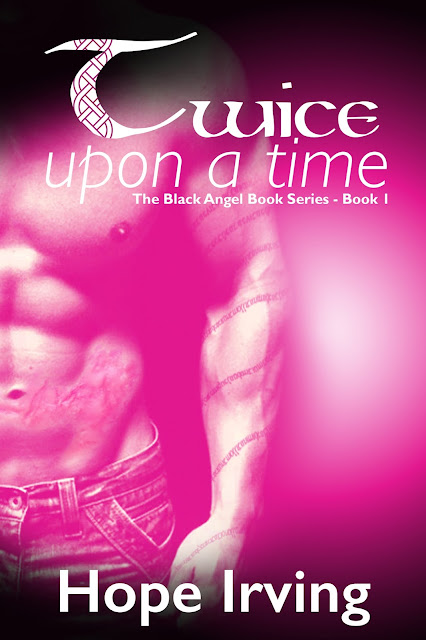 We later learn that the tale of Deidre and Morgann is believed to be legend, especially amongst calligraphers.

The opening chapter though informative is narrated in a casual manner, not from a once-upon-a-time monk; it wasn't light either. Afterwards, the narration shifts between Rose and the man carrying Morgann's time-travelling soul.

The idea that Morgann's current form may or may not appeal to Rose or Deidre is interesting and leaves room for possible problems.

"Somehow my soul remembers it all, hers doesn't.
But how will she remember who she was, who we were?
Will seeing me be enough?
Will I need to trigger her memory?
Will she accept me as I am now?"

Twice Upon a Time sets the backdrop for the upcoming books in the series. There is a lot of action, although not much with regards to bringing Deidre's and Morgann's souls back together.

Rose is also a cutter and I particularly liked how Irving maintained this trait throughout the novel, even when Rose was happy, giving a realistic side to a paranormal story.

"Gifted Deirdre cast the spell that enabled our souls to eventually be reunited. She couldn't bear for us to be apart, and neither could I."

I did not enjoy the too much drinking part of the novel; I felt it was overdone. But that's just me.

Having been in the search for Deirdre's soul for-ever, Morgann or his host seems unable to comprehend that he may have found her, putting him off balance, and making him think irrationally. I liked that. Although, I felt sometimes he was way too irrational (but that's the norm in relationships now, especially when you make assumptions).

Getting viewpoints of the two protagonists allows the reader to guess at events and see beyond what is going on. There were parts when I was biting my nails with worry and others when I was telling off the characters or just going on "No. No. Nooooo!" (So you can probably say it's a bit of an interactive novel.)

Twice Upon a Time is filled with active, fun, interesting and recurring characters, giving the novel a realistic side. The group barely sleeps; however, they do give Rose a breather, allowing her to get her mind off G. often.

Falling under the romance and new adult genres, the novel includes more than just kissing. In addition, Rose's desires are awakened all of sudden and need to be satiated.

"There is no way to find a logical way to deal with this when logic isn't involved."

There isn't major character development for the two protagonists, however, this is expected considering the tale will continue in other parts and hasn't seen major progress in this book. Although Rose does develop a bit, at least she figures out what she wants and that she can't wait for her crush to grow up or take a decision, Morgann's host seems to require several hard slaps on the face to wake him up.

Although there aren't many profound images in the novel, Twice Upon a Time has many beautiful quotes. I also liked the idea of calligraphy and how it connects the characters together, including Rose and her new crush. The following bit will you give you an idea on what I mean.

"To make it work, I have to focus like I do in calligraphy with the ductus; its' the same mechanism: one step at a time in a specific order. I have to remember to breathe. To ensure the fairytale ends well, I will stand by her side until she trusts me and she's ready for me. At last."

I liked that the ending to Twice Upon a Time was different from what I expected.


Note: I received a free copy of Twice Upon a Time from author Hope Irving in exchange for an honest review. I look forward to reading the next part(s) in the series, which I've been told are likely to be published in 2016.

Also, check out these extracts/excerpts from the novel, here and here.