Excerpt from The Flight of the Pickerings by John Grayson Heide

Today, I'm featuring author John Grayson Heide and his dramedy novel The Flight of the Pickerings. Hope you enjoy reading the excerpt below. 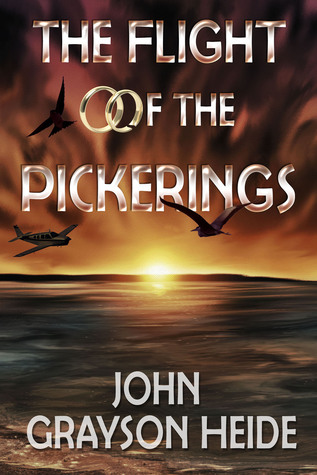 Guy Pickering has the biggest problem of his life. Dorothy, the only woman he’s ever loved, suffers with pain and dementia and has only weeks to live. Years ago, she made it clear to Guy that he is expected to put her out of her misery if she ever got to this stage. And he just can’t bring himself to do it. With love and honor in heart and a dread of loneliness, he decides to go with her and saunter into the afterlife beside his wife.   A plan is hatched, but Guy is not good at this sort of thing and everything is further complicated by a rebellious teenage grandson that shows up unexpectedly and a fame hungry reporter that chases them in front of a world-wide audience. Much to Guy’s frustration, Life keeps getting in the way of death.

The Flight of the Pickerings is a love story that wrestles with end of life issues and our right for self-determination.  Filled with tender moments and comic twists, this book engages the reader in one family’s final journey, a voyage all of us will take, sooner or later.

THE FLIGHT OF THE PICKERINGS
By: John Grayson Heide
2008

“Damn!” Guy glanced sideways out his cockpit’s left window and winced at the roaring chop of a Navy Seahawk helicopter keeping pace at an aggressive distance. High above the bluegreen waters of the Atlantic, Guy’s stalwart but aging Beechcraft Bonanza four-seater fretted forward like a nervous mackerel beside the efficient shark-like chopper.  The helicopter’s pilot miraculously maintained the threateningly close distance between the weaving aircrafts while glaring back at Guy from behind dark wrap-arounds and steadily jabbing a finger at his earphones.  Over the Beechcraft’s radio, an insistent message shrieked.  “November niner niner seven zero two, do you read me?  Repeat! Do You Read Me?”
Further back along the fuselage, the chopper’s cargo door window framed the contorted face of a uniformed man waving and bouncing as if he were on a mini trampoline.
Guy’s hand reached to flick on his microphone, but
hesitated in mid-air and instead pounded the steering wheel.
“Shit!” he yelled out.

At this same moment, in this same space, the living song of a different, but not so different reality/paradigm also is heard…
From beneath the sound of the humming engine, in a voice that saints, shamans and angels can clearly hear, the Bonanza airplane's essence spoke from the depths of its soul.  I’ve never seen Guy like this. He doesn’t know what he’s doing!  Every rivet in Guy’s long trusted aircraft, the stouthearted nineteen sixty nine vintage Bonanza, shuddered with the reluctant embrace of the inexplicably complicated situation.  Those helicopters are so close! Just keep going…  This is terrible!  Nothing to do but keep flying.  Keep going.
The sound of another chop-chop-buzz blind-sided Guy’s attention and he craned his neck over the right wing.  Trailing behind and two hundred yards off to the right, flew a second helicopter—a Bell 407.  A bold red logo announced ‘Channel Seven News, your local On the Spot Source.’   The words ‘On the Spot’ were cleverly arranged around a circular side window.  Framed inside this window were the screaming faces of his daughter and his grandson.  No need to hear their words, Guy already knew the message.  “Shit! You’ve got to be kidding me,” he slapped his forehead.

“Guy Pickering!  What are you doing? Where are we?”  Dorothy’s voice skewered him from the passenger seat mere inches away. “This certainly seems to be taking a long time to get there.”   Grimacing, he turned to face his wife. Random tufts of grey hair stuck out from under her headphones.  On her forehead, a lopsided red blotch marked how hard she had pressed her head against the window in a vain attempt at seeing any form of land below.  Her left brow arched high over a piercing eye and her lips were slightly pursed.  After nearly fifty years with Dorothy, Guy well knew the signs; time was running out.  She waited.  He didn’t have an answer.

The thin metal skin of the Bonanza rumbled and vibrated as the impatient Navy pilot, intent upon recognition, maneuvered even closer.  Guy patted Dorothy’s thin knee and swiped a sleeve across his forehead, “We’re fine, Honey,” he called out above the din. “It will all be… uhh, we’ll be there soon.”  Guy’s voice faded as he stared straight ahead.  A grey haze on the horizon mimicked his thoughts, obscuring the thin edge between sky and water and intent and reality.
“Oh…good,” Dorothy settled back into her seat, pulling the shawl tighter around her shoulders.  She pointed over to the Navy helicopter and nodded in their direction, “Are they coming too?” she said while wagging two fingers to the pilot who remained motionless and grim behind anonymous mirrored lenses.

As if a puff of otherworldly ethers startled him awake, Guy turned and with innocent wonder beheld the face he had loved for so long.  Dorothy’s eyes softened—a trace of a strained smile.  She reached across and laid a hand on his thigh.
Guy sat transfixed, confused by his swollen heart.  For a brief moment, the intense presence of the Navy helicopter and the channel seven newscast helicopter faded away, right along with the whole damn plan.

Purchase The Flight of the Pickerings via Amazon.