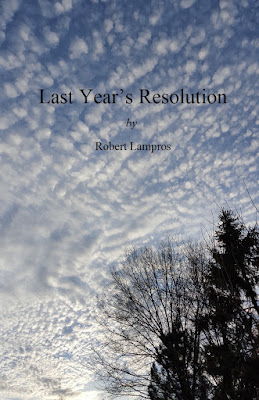 Last Year’s Resolution is a novel about Edmund Stovender, a famous author who falls in love with Marie, a journalist who calls him for an interview just before the performance of his hit play. Their lives accelerate through an epic adventure testing their faith, strength, and love for each other, as they discover that their story might pivotally influence the fate of the world.

Eddie spent the majority of his childhood as most children do, divided between mandatory school work and outdoor adventures with the other kids in his neighborhood.  He loved sports, but that love quickly faded at age thirteen when he took up smoking cigarettes, at which time he turned his attention to skateboarding and playing guitar. Proving successful at neither one of those activities, he spent more and more time reading books, watching films, and writing both fiction and nonfiction stories of his own.  By the time he graduated high school his writing had been published by a number of literary journals and featured in various newsletters, making his parents very proud.  After attending Illinois State University for two years, he dropped out to pursue his career full time, and moved to New York, because that’s what writers do.  Eight years later, Edmund Stovender was the author of three bestselling novels and a National Book Award-winning play, The Hopeful Sigh, then in its third year on Broadway.
This is where Eddie’s story begins:  He sits in a coffee shop, drinking a beer, a mile down the street from the theater where his play will soon start.  His phone rings.
“Hello?”
“Hi, Eddie?”
“Yes?”
“Eddie Stovender, the writer?”
“This is he.”
“Okay, hi.  My name is Marie, Marie Altnikov.  I’m a journalist with The Triune Times.”
“Sorry, I don’t do interviews with people whose middle and first names are the same.”
“You don’t—I’m sorry?”
“You said your name was Marie-Marie, I was making a joke.  Never mind, I’m an idiot.”
“Oh, ha-ha.  That’s… kind of funny.  I actually don’t want an interview, I’m calling because I’m going to see your play tonight, to review it for the Times, and I was hoping you could answer a few questions first.”
“How is that not an interview?  Answer a few questions, that sounds like an interview.”
She was silent for a moment.
“Hello?”
“I’m here.  Maybe it is an interview.  I hadn’t thought of it like that.  Do you have a minute?  I’m sorry to call you out of the blue like this.”
He checked his watch.  “Marie, the play starts in forty-five minutes.”
“That’s fine.  I only need ten, fifteen tops.”
“Excuse me, bartender, may I have another Blue Moon, please?  Sorry.  Alright, fire away.”
She cleared her throat and he heard papers rustling on her end of the phone.  “Question number one.  What inspired you to write The Hopeful Sigh, and what were your goals for this piece when you started writing?”
“Um…  Well, four years is a long time ago—that’s when I wrote the play.  Honestly, at the time I think I was trying to save the world.”
“Interesting.  And you thought writing a play could do that?”
“The right play, sure, if it performed its function correctly.”
“What is its function?”
“Sorry, Marie, I explained all this a long time ago in my other interviews.  Didn’t you read—”
“I don’t read newspapers.”
“But you write for one.”
“Yes, sir.  Do you mind answering the question again?  I’d appreciate it.”
“Sure, fine.  I thought The Hopeful Sigh, if I wrote it properly and it was performed properly, could help people realize… we’re not home yet.  The world we’re in now, it’s really just a stage, and what each of us does here, our work, our families, our dreams, the best parts of our lives, that’s what our true homes are going to be like, you understand?”
“Sorry, I’m writing… ‘what our true homes are going to be like.’  Okay.  I think I got it, like Heaven.  A place where dreams never die.”
“Exactly.  A place where nothing ever dies.”
“Question number two,” she said.  “Who is your greatest influence?”
“Whoa.  Can I do top three?”
“No, you have to choose one.”
“Why?”
“It’s the rules.”
“Then I’d have to say Shakespeare.  I mean everyone says Shakespeare, but it’s true, he really is the most influential writer we’ve got.  War, politics, love, faith, humor, betrayal, death, salvation…  It’s all there, packed into a neat entertaining format for real human beings to bring to life.”
“Lovely.  Well said, Mr. Stovender.”
“That’s what I do.”
“Question three, last one.  What would you say are the autobiographical elements of the play?”
“Huh.”
“If you don’t mind answering.”
“It’s not a matter of minding, it’s more whether or not it’s possible to answer.  Everything and nothing, really.  Nothing that happens in the play ever happened to me personally, but at the same time I feel like it all happened to me, like I’ve lived through those events somehow.  I don’t know.”  Eddie laughed, “Is that clear enough?”
“Not a problem.  I know exactly what you mean.”
“So, are we done here?”
“Yes, indeed.  Unless you’d like to add anything.”
He thought for a moment, watching the bubbles rise in his glass.  “Something I learned a few years ago, the first season, on opening night.”  He drank the last half of his beer.  “If you write a play that’s meant to take people up to heaven, you had better be willing to walk through hell.”
“Thanks for your time, Eddie.”
“God bless.” 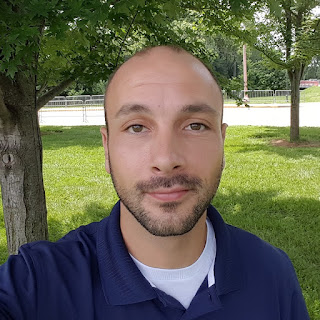 Robert Lampros is an author of Christian poetry, essays, and fiction who lives in St. Louis.  He earned a Bachelor's degree in English Literature from Washington University in St. Louis.  His books include Fits of Tranquility, Illuminating Sidewalks, Om-Bork, Afternoon, Eleven Floors, and What Is Sacred.  His latest novel, Last Year's Resolution, is currently available as an e-book and is set to be released in paperback in Fall 2016.