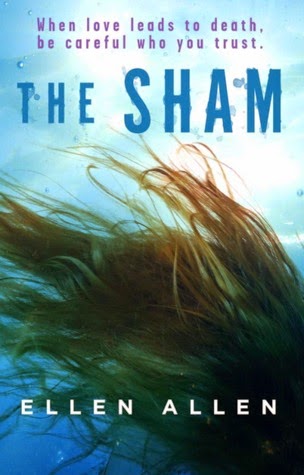 The Sham by Ellen Allen is a very heavy read. And while I don't like to use the word 'very', this book is by no means a light or quick read.

The novel is about Emily, a seventeen year-old girl, who meets an eccentric boy called Jack, whose body is constantly failing and who thinks "they" are after him. Soon after, dead bodies start to appear and Jack is the main suspect. The deaths remind Emily of her friend Grace, who passed away before she moved to The Sham.

The book opens with Emily walking her little sister. They come across a group of four girls, taunting and bullying a little boy. The scene is quite descriptive and not for the faint of heart. Jack suddenly appears and attempts to rescue the little boy, Charlie, from the bullies.
Emily and Jack hit it off soon after and bit by bit become close friends, and boy and girl friend. The dead bodies that begin to appear afterwards are those of the four bullies from the first chapter.

The pace of the novel is really slow; it picks up in some areas, but even then it is slow compared to other books. Even though there is a mystery, I felt it was a there in the background but the focus was on Emily and Jack and their relationship to the killings.

Although The Sham is highly emotional, it is rather tiresome, or at least it was so for me. At one point, I felt like I didn't want to continue reading, and it took me nearly two months to finish the book, simply because I felt there wasn't much progress, like I was reading but not moving forward. I did want to resolve the mystery, and discover who Jack was.

Throughout the novel, Emily feels responsible for protecting Jack, who is not very forthcoming when it comes to information about himself, but at the same time cannot help but wonder if her boyfriend is the killer. There are two investigators, whom Emily calls Red and Brown. The names given to them are a bit significant as Red is hot-tempered and more annoying and stressful than his companion. Brown is calmer and a little sympathetic towards Emily. The way the investigators pressed her for information, was nerve-wrecking for both the protagonist and the reader.

I didn't feel that there was any character development. However, Emily's swaying between what she felt was her responsibility towards Jack and what the police believed was realistic. I didn't see Emily make a major realisation or revelation whether regarding herself or Jack.

I also felt the characters were crazy, all of them, not only Emily and Jack, the latter may have run away from a mental institution, but also Piggy, Jack's and Emily's families, as well as the whole town. I didn't like any of the characters to be honest, and that put me off the book for a while.

Jack was eccentric in many ways, including eating raw food and sometimes food from the bin, like eating 25 bananas just walking home or eating in the bathroom.

I like the pun in the title, which I was sure was related to the heart of the novel from the beginning and even though at some point I felt that the author was leading me away from that pun.

I also like how the ending sort of diverged into two parts, even after we discover the mystery behind the killings, there is still the mystery of Jack and the man Emily calls Piggy, who added an interesting touch towards the end.

The novel has some good imagery and similes, and some descriptive and unconventional images such as:
"Like a bag of unexploded possibilities."
"Like we were now in the side act to the main play, dimly lit with an invisible audience tracking our every move."

The book is around 250 pages long but I felt it was at least twice or thrice as much. The chapters or sections are REALLY long and I felt like I was trudging my way to the end.

Apart from wanting to know who was behind the killings and making a promise to provide an honest review, I did not feel there was much to push me to keep going. In my opinion, I felt the novel needed more momentum.

For Kindle readers, The Sham should be read in white, mint or sepia, as there are several colours used that do not appear in the black-background view.
Posted by Nada Adel at 2:00 AM