The Huntress: The Beginnings - Book Review 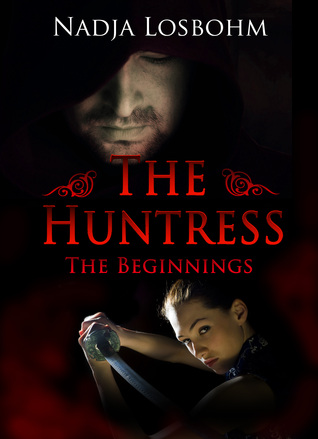 The Huntress: The Beginnings by Nadja Losbohm is the first instalment in The Huntress series. Originally published in German, the novella (around 150 pages) is about Ada, whose life is turned around when she is told that she is destined to become a Huntress.

Ada Pearce is an overweight ordinary woman, who hates sports. Helping a neighbour, she enters St. Mary's Church and is told that she has to leave her life and everything behind her to become a Huntress.

There, her trainer and only companion is Father Michael, whom we learn does not age like normal people and has his life tied to being inside the church.

Narrated from Ada's first person perspective, the novella opens with Ada telling the reader that she is pregnant and is going to meet with a reporter (Dan Meyers) to tell the world her story and get them to realise that there are monsters on the streets that they need to be careful of. Although Father Michael originally opposes the idea, he understands Ada's need to keep people safe.

"So, when I can't make my rounds, who else is there to protect all those people from what's lurking in the dark?"

A Hunter or Huntress comes along once every fifty years. With Ada's pregnancy, there will be several months of Huntress-free streets, making it a monster-playground.

The prologue is after Ada discovers her role as a Huntress. As the novella moves forward, she tells the reader how that happens.
"My name is Ada Pearce, I'm twenty-four years old and I'm a vampire and monster hunter."

The Huntress: The Beginnings is based on flashbacks as Ada tells the reporter her story. Some flashbacks are stories told to the reader and not the reporter owing to their sensitivity or simply because they are too private to be shared. Because of the flashbacks, there isn't a fixed pace for the novel.

Although the narration is from Ada's perspective, we get glimpses into Father Michael's life – after he learns to trust her – and how he has struggled over the years to become the man he is today.

We also see Ada progress from one who curses all the time to someone who begins to respect the institution she is in and the man in charge of it. At several points at the beginning of the novella, Father Michael warns her that if she continues to curse, he will throw her out. Her interests and concerns also change and she learns acceptance (among other things).

She also learns to see past Father Michael's rough exterior and the walls he has put around himself over the years.
Ada is fairly sarcastic, adding comic relief from time to time. Moreover, her interactions and situations with Father Michael, a man who has only trained Hunters for centuries, are quite funny.

"The Father had no idea about matters of a female nature."

I particularly enjoyed the flashbacks, which show Father Michael's 'human' side and how time affects people who live in closed places (kind of like being with a grandparent).

"Everything about his face seemed to be crying out with pain. His black eyes shone wet as horrible images of events in his past raged behind the veil of tears."

The Huntress is also a romance novella. From the beginning, we are told who the father of Ada's baby is, which should not come as a shock to readers since the couple lives together.

"Every time you go out there in the dark, I die anew," he whispered. "I die with fear. I die with worry. I feel helpless every time I stay behind. I can't help you, can't protect you when you need it."

I like the use of fairy-tales and other literary references in the novella. Father Michael tells Ada that she resembles Snow White and that he finds the seven dwarfs to be scary.
Although, I haven't read the original Grimm Fairy Tales, there are several references in The Huntress, which have encouraged me to consider reading the originals.

"Where do you think the authors of such books…got their ideas from? There's always a grain of truth in every legend." Ada tells the reporter in their first meeting.

The novella is not devoid of monster-hunting. Although, apart from vampires, we do not get the names of monsters, we are given description details of each. Personally, I wished there were more details in the fighting.

"Why weren't there any good-looking, nice-smelling monsters? I suddenly found myself wondering."

The novella falls under the young adult genre and has no adult content, with the exception of minor insinuations.

The first instalment in the series, The Huntress: The Beginnings is an enjoyable read. It sets the ground for the next three books as well as Ada's and Father Michael's world.

Should the following instalments be translated into English I look forward to reading them. In the meantime, I'm content with Ada, her journey and her transformation.

Note: I got free copy of The Huntress: The Beginnings from the author in exchange for an honest review.

Purchase The Huntress: The Beginnings in English, or in German.

Check out more of Nadja Losbohm's works in translation via Inkitt.