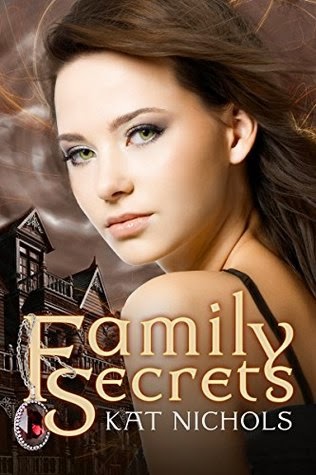 Family Secrets by Kat Nichols is the first instalment in The Secret Societies Collection. The novel is about Sophia, who has been living with her best friend Abby after both her parents died, but soon she is sent off to live with family she never knew existed.
Not only so, Sophia discovers that comes from a long line of witches. She has to learn everything within five months for her initiation on her eighteenth birthday. She is also to be named the next matriarch of the Blackthorne Coven. The family and coven are loaded with secrets, rivalry and lust for power. Sophia is to be trained by her cousin Alexa, who is not an easy-to-deal-with character. At school, Sophia meets Connor, who has a secret of his own, and who is named by Alexa as the 'enemy'. But who is really the 'enemy' in Family Secrets?

Sophia has a long journey ahead of her and she has to decide who is friend, who is family, who is foe, and who falls under more than one of these categories.
Narrated in the first person, the novel is about Sophia, her magic and her journey of self-learning and self-discovery. Occasionally, it feels like a diary-entry, but it is nonetheless enjoyable and smooth.
As the novel begins, we see the Sophia is not a strong character.
"Sophie, I don't want you to go." Abby grabbed me in a hug, squeezing me tightly.
"I don't want to go either. But I have no choice."
"Yes, you do. Fight back, Sophie. Stand up for yourself for once." Her voice was sharp and she pulled out of the hug, looking directly at me. "Don't let people walk all over you."
A little later, Abby also tells her "Standing up for yourself doesn't make you a bad person, you know."
As the novel develops, we see Sophia struggle with these words at several points, sometimes winning and sometimes losing. Despite playing a small role in Family Secrets, Abby is both an important character and a major part in Sophia's development.
"She was always more outgoing and confident than me. She knew how to act in all sorts of situations, while I just floundered in social waters like a toddler learning to swim."
Bit by bit, Sophia learns to react differently to each character. There is Alexa, Connor, Lucas, Sydney, the maids and mostly importantly her grandmother Beverly.
"She stared at me like she was trying to see into my soul. Her blue eyes didn't remind me of my dad's now. Hers looked like ice chips – frozen and hard. My dad could never have those eyes."
As the novel progresses, we see that even the grandmother has intentions of her own, which are constantly revealed to be darker than what others think.
I truly enjoyed the magic system incorporated in the story. Nichols has certainly exerted efforts to lay down the rules for this well-crafted system, which is slightly complex for the practitioner but easy to understand for the reader. Each spell is bound by a sigil, a symbol, that the practitioner has to imagine in their mind before creating the spell through a hand gesture.
In addition to reading journals written by previous witches from the coven, Sophia is to be instructed by her cousin Alexa in order to be ready for her initiation. But what happens when your tutor is jealous and adamant on making you fail so they can take your place?
During training, Alexa is always pushing Sophia down rather than encouraging her. "We'll start with the easiest of the elements—air. You won't be able to do too much now, but give it time."
In the journals, Sophia learns about other types of magic; however, she soon realises that the journals she is given are of lesser witches. She finds much darker ones in her grandmother's study and begins to sneak those to read them. I particularly liked this part in Sophia, as it shows her the extents of and other secrets in magic. It also contributes to her development and better understanding of her coven.
In one of the journals, she learns about a spell called "Compelling", which is a bit similar to the Imperius Curse in the Harry Potter books.
The language used in Family Secrets is simple and helps the pace of the novel, which is fairly quick even from the beginning. I liked how Nichols used the maids, who add relief and warmth compared to the coldness Sophia encounters from her family.
"The way she said dear grated on my nerves. It turned an endearment into a dirty word."
Although I had an initial dislike for the novel's title because of the negative connotations often associated with those two words, when I finished the novel, I felt it was actually a suitable one.

I must say, I didn't want the novel to end. It was quick, fun and enjoyable, even the sad parts played major roles in the character and plot building. I can hardly wait for the second instalment in the series.