Excerpt from scifi romance The Mercenary by Petra Landon 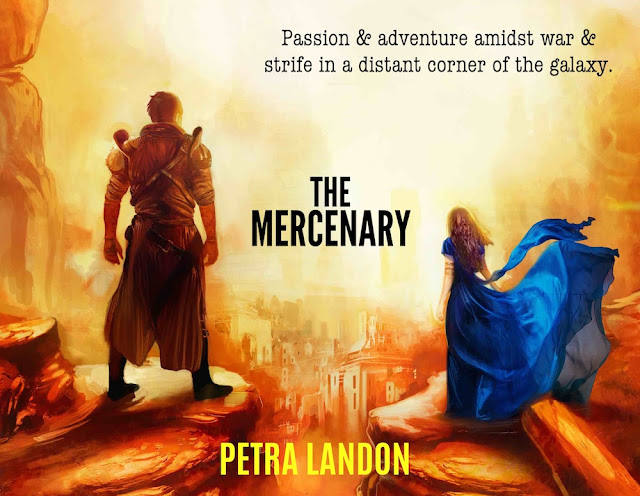 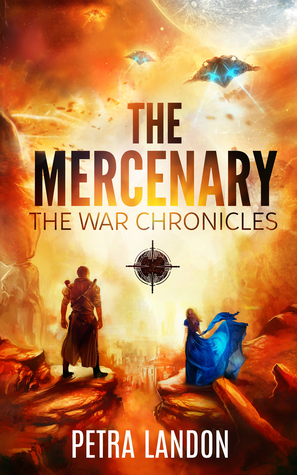 She’s a prisoner of the Imperial Forces. He’s a nomad with a private mercenary army. Can a desperate girl’s risky gamble and a fierce warrior’s love turn the tide of war and alter the balance of power in their slice of space?

In a distant corner of the galaxy, Quadrant Five burns in the flames of a deadly war. The Budheya people are one of the worst affected. Once the most advanced civilization in the quadrant, they now struggle under the cruel yoke of Ketaari occupation.

Saakshi
Imprisoned by the Ketaari Imperial Forces, a young Budheya girl is sent to a distant space station to work in an alehouse. For a girl who has known only hardship in her short life, things could be worse. Until an old foe walks into the alehouse.

Zoran
Zoran is Hadari’Kor – notorious across star systems for their prowess in battle. Their fierce reputation allows them to retain their independence, even as others are forced to choose sides in the war. Drawn to a weary-eyed server girl, Zoran is forced to confront age-old traditions and question his role in the war.

The Prisoner & The Mercenary
Alone, friendless and far from home, Saakshi makes a desperate gamble to trust a formidable and enigmatic stranger whose hot gaze haunts her dreams. The fallout from this improbable pact reverberates across space. As a relentless enemy hunts her, Zoran must fight to protect Saakshi through a minefield of shifting alliances. When passion ignites amidst the embers of a smoldering war, will a warrior’s quest for justice bring a mighty Empire to its knees.

Author’s Note: A spirited and resilient girl, a fierce warrior with a conscience, a fiery passion that flares amidst the debris of a deadly war and a love that will alter the fate of an entire quadrant forms the tale of The Mercenary, a standalone story that sets the scene for The War Chronicles – a collection of SciFi Romance & Space Opera tales with romance, swashbuckling adventure & a sprinkling of action.


Add The Mercenary by Petra Landon to your Goodreads to-be-read list.

EXCERPT FROM THE MERCENARY BY PETRA LANDON


He swam towards the shore, wading out of the water to where she sat watching him. Saakshi watched her large warrior arise unhurriedly from the tranquil lake, the water spearing off his hard body causing his myriad colorful tattoos to gleam brightly on his gray skin in the light reflected off the plasma torches. He shook his head gracefully, sending an arc of water off his dark hair. The scattered droplets hung over him like a short-lived halo around his large muscled frame. Saakshi stared at him, frozen in place and unable to take her eyes off him. In that moment suspended in time, to the young Budheya girl gazing up in awe at her warrior, it felt as if the Pura herself had sent him for her – her own personal guardian angel charging in when she’d needed him the most. “Like what you see?” inquired the husky voice she remembered so well from before.
Saakshi flushed, looking away from those molten dark eyes.
He came down gracefully on one knee beside her, gloriously unselfconscious in his nakedness.
“I do, too. Like what I see, that is” he said scratchily, his voice like sandpaper.
He used a large finger to gently nudge her chin until she met his eyes.
“You have me at your feet, tseriya. I hope you will show mercy.”
Lost momentarily in the burning eyes and mesmerized by the husky voice, Saakshi realized dazedly that he seemed to be kneeling before her. She scrambled up with a muffled sob to throw her arms around him, smothering his face and neck with little kisses.
“Tseriya” he asked, a hint of uncertainty in his voice. “Why are you crying?”
“I’m just so happy that you came back” she sobbed into his neck.
“Of course, I came back” he reiterated in some confusion, trying to dislodge her from his neck to meet her eyes. “Why wouldn’t I?”
“I thought you were off doing more important stuff now that I was safe with the Alliance” Saakshi hiccupped into his neck, resisting all his attempts to get her to meet his eyes.
“Tseriya” he cajoled. “I could never stay away from you.”
He cupped the back of her head with one hand.
“Tseriya” he said urgently. “Haven’t I proved already that I cannot stay away from you? That is what I cannot forgive myself for.”
It was the note of despair in his voice that finally got through to Saakshi. She loosened her clasp around his neck to lean back and scan his expression. A callused finger brushed away her tears carefully as they spilled over from her eyes but Saakshi barely noticed the tender gesture. “Forgive yourself? What do you mean …” she trailed off uncertainly.
He said nothing, but what she saw in the dark eyes had Saakshi straightening her spine.
“You helped a stranger who came to you for assistance. You could have chosen to walk away. Without you, the Unta-Golar …” she stopped mid-sentence, her words cut off by the large finger Zoran laid gently across her lips.
The expression on his handsome face shuttered right before her eyes.
“I’m no hero, Saakshi” he said steadily. “I shamed myself – I took advantage of a young and desperate girl.”
It was Saakshi’s turn to lay a gentle finger on his lips to prevent him from further self-reproach. “No” she shook her head forcefully. “Nothing happened between us that I did not want. Believe that if you believe nothing else, Zoran Hadari-Begur-Kor.”
She withdrew her finger from his lips. He remained silent but did soften enough to allow her to see the regret and despair in him.
“You came for me every single time” she reiterated a tad desperately. “When no else did.”
Zoran shook his head, clasping her hand to plant a soft kiss in her palm.
“Yes” he acknowledged. “But I also took advantage of you.”
Saakshi shook her head vehemently, desperate to make him believe that she had never felt coerced into an intimate relationship with him.
“You … you loved me like no one else had, Zoran” she whispered, shyness and embarrassment forgotten. “I was drawn to you, even before I went to you. I just … I was too inexperienced to know it.”
His expression twisted subtly at her soft admission. “I was not.” 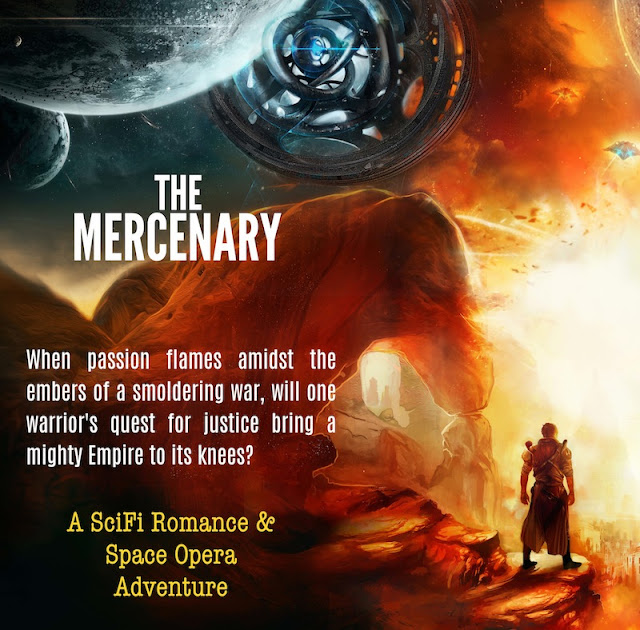 As part of the book blitz there is a giveaway for a $25 Amazon Gift Card and a signed copy of The Mercenary. Ends 5 October.

Purchase The Mercenary via Amazon.

Get to know Petra Landon better in Nadaness In Motion's exclusive interview with the author. 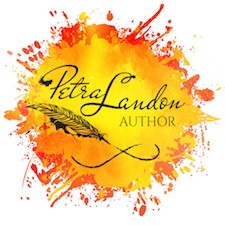 An avid reader all her life, only recently has Petra allowed her own imagination to run riot. She loves to travel, loves the outdoors and reads everything she can get her hands on, time permitting. Her taste in books is very eclectic – she tends to like stories with vivid and quirky characters that have elements of fantasy, adventure, romance and mystery interspersed together. A good book for her is one that makes the reader think long after it has been finished and set aside. And, one that draws the reader back to it, again and again.
To share the tales that have lived in her imagination for so long is a labor of love and a lifelong dream come true for her.