Today, I'm featuring a Character Guest Post – the first on my blog – by author Nancy Cole Silverman. In the post, the main character of her new book Room For Doubt, Misty Dawn is the speaker/writer of this post. The book is a cozy mystery from the Carole Childs Mysteries. 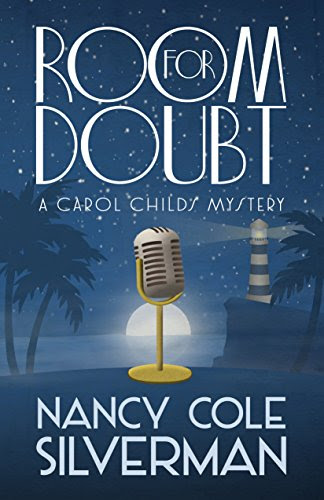 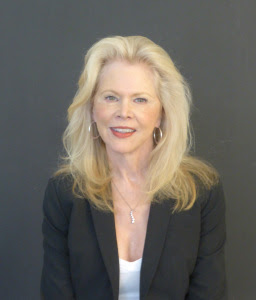 Nancy Cole Silverman credits her twenty-five years in radio for helping her to develop an ear for storytelling. In 2001, Silverman retired from news and copywriting to write fiction full time. In 2014, Silverman signed with Henery Press for her new mystery series, The Carol Childs’ Mysteries. The first of the series, Shadow of Doubt

, debuted in December 2014 and the second, Beyond a Doubt 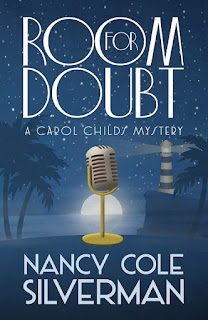 When radio reporter Carol Childs is called to a crime scene in the Hollywood Hills at five thirty in the morning, she’s convinced it must be a publicity stunt to promote a new movie. That is, until she sees the body hanging from the center of the Hollywood sign. The police are quick to rule it a suicide, but something doesn’t add up for Carol. Particularly after a mysterious caller named Mustang Sally confesses to the murder on the air and threatens to kill again.

With the help of an incorrigible PI, her best friend, and a kooky psychic, Carol is drawn into the world of contract killers and women scorned. As she races to find the real killer, she finds herself faced with a decision that will challenge everything she thought she knew.

Hello. Have you come for a reading?
Yes, I’m Misty Dawn. No doubt you’ve heard of me.  Hollywood’s famed psychic to the stars.  And, no, I don’t read cards or stare into crystal balls.  Those are props for amateurs.  People who will take your money and promise to look into your future or fix your love life for a fee.  I’m the real thing.
Please, take a seat and let me get a look at you.
Would you like some tea?
Oh, don’t worry, there’s nothing in it. I am fond of mixing in my herbs, and I have been known to do a concoction or two–strictly for medicinal purposes mind you–but not today. And while I’m on the subject, I don’t read tea leaves either. But I do find it clears the mind...and in today’s world, well...we’re all so cluttered with thought.
Ah! But I digress.  I do tend to go on and on.
So, if you’ll allow me, I’ll pour myself a cup and share with you a little about who I am and how I came to meet Carol Childs.
To start with, this talent I have for reading people and looking into the future, is a gift.  I didn’t always understand it, but over time I realized I was able to look into people and see what others can’t. For years I was everywhere in Hollywood. TV. Radio. Stars invited me to their homes. A former president’s wife called regularly, and on more than one occasion the FBI asked me to consult on difficult cases. 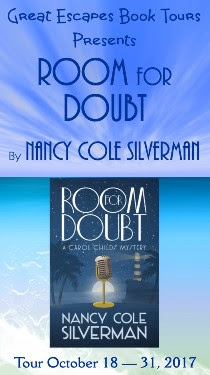 I’ve had a very unusual life.  I live in California now, a state I gravitated to as a young woman, following a group of rainbow people. Hippies from the sixties, who came west to promote peace and love. I came in my yellow Volkswagen bus painted with flowers and peace symbols selling love potions. I still have the bus, but I don’t drive or shouldn’t anyway.
What’s that? You wonder how old I am?
A lady never tells. But certainly looking at me with my mane of grey hair and less than svelte figure, you’ve figured it out.  I’m well beyond the age of consent, and while I shuffle more than walk these days due to my arthritis, I’m not yet ready to kick the bucket. Which is a problem.
Why?
Because, much as I could see into the future for others, I neglected to prepare for my own. Yes, I know that must sound unusual, but misfortune sidetracked me. I’ve out lives my assets. My own physical strengths, my eyesight including that of my psychic vision has clouded with age.  As has my failing memory.
But fortunately, I did remember Carol.  We met several years ago while working on a case. I suppose you could say it was destiny that brought us together.  In truth, it was an empty gas tank.  I was headed out of town. I don’t remember where, only that when I realized I was running low on fuel, I got off the freeway, and ended up parked in front of Carol’s house.
It was Bossy Pants, my Calico cat sitting next to you on the couch, who recognized the neighborhood.
Yes, she’s lovely, isn’t she? But quite the wanderer. When I opened the door of my van, she scedattled. Disappeared. Poof! Just like that. Fortunately, I heard her meowing and found her on Carol’s patio. Only to lose her again when she scampered through one of the open French Doors over there by the kitchen.
So, here I am.  Living with Carol.  I try to help out where I can. The woman’s triple busy.  Trying to do it all. Big time job as a reporter for a talk radio station with two growing kids and no time for romance.  My specialty.  What a shame.
But, I know you didn’t come just to hear about that. You’d like a reading perhaps?
Is that a yes?
Well, then...let me share with you this.  I sense you’re a reader. You enjoy finding new mysteries, and I see a new book in your future. Room For Doubt, Carol Childs’ latest mystery.  But be careful.  I must warn you, it will keep you up at night. 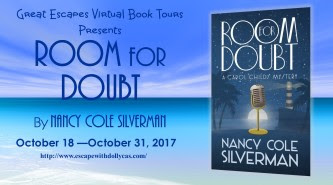 As part of the tour there is a giveaway.

Click on book cover for more inform or to order from Amazon.